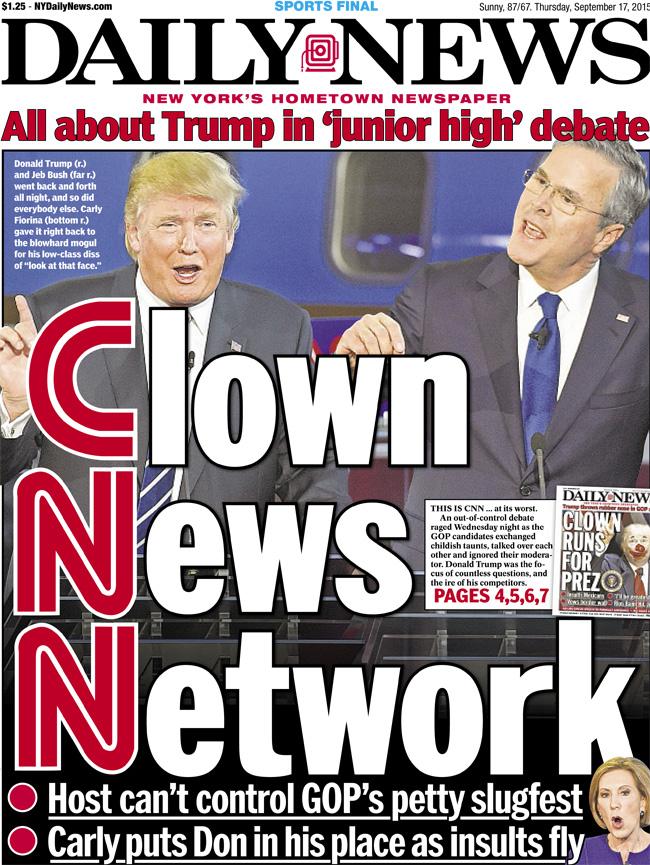 The Reagan Library in Simi Valley, Calif. was the home of the second GOP debate. With a very impressive model of Reagan’s Air Force One as a backdrop CNN hosted the debate with CNN’s Jake Tapper, Dana Bash and radio host Hugh Hewitt as moderators.

Tapper dominated the debate with question after question barley allowing his co-moderators to get a question in. They were lucky if they got in two questions. It was clear that it was CNN’s bias against republicans. CNN was there for their party. Except for Hewitt the others, Tapper and Bash, simply wanted to force the candidates into fighting each other  to  work the opportunity in such a way to help their candidate Hillary. Why do Republicans EVER go onto the lib networks to debate.  What about C-Span?

I thought the debate was interesting and kept my attention but did go on for too long and you could see the candidates sweating at the end from being on too long. I also thought the debate was poorly managed with Tapper telling them when to stop and then letting them go on. They should have had bells or a buzzer like the FOX debate did.

Before the debate the rumors were swirling among the people that the moderators were out to get Trump. In fact in the beginning the questions were just aimed at Trump, Bush, Carson and Fiorina as if the others weren’t even there. The media has always hated Trump especially Huffington Post which is a constant Barrage of anti-Trump articles daily. Ann Coulter is right in saying the only people who like Trump are the voters.

I thought Bush showed a little more energy than in the past and it was humorous to hear him at the end say he would chose the secret service name “energizer” because it shows a lot of energy then turning to Donald and say “Isn’t that right Donald?” 😀  To which they both slapped hands in agreement and smiled. I did like that. 🙂

I did not like Tapper bringing up Trump’s remark about what he said about Carly’s face. That was purely tabloid journalism designed to get a reaction and attack Trump. I think they were both embarrassed about that, but Trump gracefully took it back by saying “I think she has a beautiful face.” Carly remained stoic in her expression at that and I’m sure she felt slighted inside, but handled it gracefully herself with her response, but in the end she and Trump shook hands.

I thought you did get to see more of the candidates’ personalities and views a little more this time and they did bring out some good points. Carly especially shined this time bringing up Hillary’s server and e-mail debacle and lying about Benghazi. Carly said to ask any democrat to name an accomplishment she has done. She was absolutely outstanding and showed a very deep command of whatever issue she talked about.

Marco Rubio had a strong night and was certainly one of the top performers. Everything he said came out with conviction and passion.

Cruz was very good and is one of the best candidates for conservatives. Carson held his own and made good points but was not shining. He speaks softly, but doesn’t carry a big stick like Theodore Roosevelt said. Trump has to get more polished and watch his mouth. I like how he stands up to the media and doesn’t allow them to push him around which I fear the other candidates would let happen to them.  I also like how if you cross Trump he pushes back hard. Christie shined more this time but shouldn’t always be saying I did this and I did that.

Polls on who won the debate are far and wide. GOPUSA had this poll:

Drudge had this poll:

» GOP Candidates Spar for Three Hours… But Who Won? » The Loft — GOPUSA