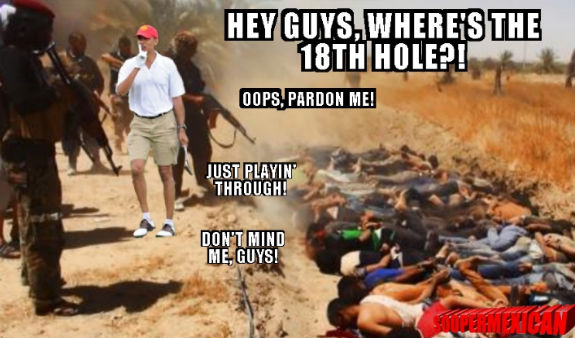 In his prime-time speech to the nation on the eve of the 13th anniversary of the Sept. 11 terror attacks, President Obama vowed to “degrade and destroy” the Islamic State insurgency in Iraq and Syria with airstrikes and 475 U.S. boots on the ground – but he also made a particular point of declaring that the Islamic State terrorists “are not Islamic.”

“Now let’s make two things clear: ISIL is not Islamic,” Obama said, speaking from the state floor of the White House residence. “No religion condones the killing of innocents, and the vast majority of ISIL’s victims have been Muslim.”

He added, “And ISIL is certainly not a state. It was formerly al-Qaida’s affiliate in Iraq, and has taken advantage of sectarian strife and Syria’s civil war to gain territory on both sides of the Iraq-Syrian border. It is recognized by no government, nor the people it subjugates. ISIL is a terrorist organization, pure and simple. And it has no vision other than the slaughter of all who stand in its way.”

Obama said the Islamic State, also known as ISIS or ISIL, poses a threat to Iraq, Syria and the broader Middle East – including American citizens, personnel and facilities.

Obama’s strategy is no real strategy and nothing new. He’s basically using air strikes to combat the threat which he has been doing all along commenting in his speech that “We have had 150 successful air strikes in Iraq which have saved the lives of many men, women and children” However air strikes are not enough, you need to capture some of them and interrogate them to find out where they are located and what plans they have.

On the night of Sept.10th Obama laid out his four point plan to defeat ISIS even though he’s been aware of the threat for more than a year now.. The four points of Obama’s plan are:

1)A campaign of air strikes with the help of the Iraqi government and forma broad co-olition of countries to help.

2) Hunt down terrorists where ever they are.

4) Provide humanitarian to civilians who have been displaced

This is basically what we have been doing, but the question is will countries like Jordan, Syria, and the UAE be willing to join in? Saudie Arabia already supplies ISIS. Notice he is referring to them as terrorists once again unlike previously referring to our presence there was “overseas contingency operations and “man caused disasters” and the Fort Hood massacre was ‘work place violence.”

Obama is a reluctant warrior. First he had no strategy, then he said they “could be managed”, then he said “we will follow them to the gates of hell”and now it’s  “hunt them down and destroy them,” which was borrowed from Bush’s 9/11 speech. So far only nine nations are joining us and they are reluctant too. He also mentioned he wants to support the moderate Syrian rebels which also support ISIS against Assad which we   supported  already.

Obama said, “We can’t do for Iraq what they can do for themselves and it will take time to eradicate a cancer like ISIS.”

All this is a day late and a dollar short to coin an expression. Just 13 days ago he said he had no strategy (even though he’s known about the threat for a year now and had more than enough time to come up with one) and America criticized him for not having one and spending too much time on the golf course more than any president in history. Obama tried to sound tough by saying all the tough American patriotic rhetoric like “America will always defend people who fight for their freedom” and “You will find no safe haven” and “We will destroy you” amongst other patriotic rhetoric, but  it came across as weak and phony to me because it is counter to what he really feels and believes. Mr. President you have to come off the golf course first.

I have always said to listen to what he says and then think the opposite and you will find what he really means. Tonite was no different. He said America is safer because of his air strikes.”We are not safer .ISIS now controls over thirty cities in Iraq and has control of land the size of Belgium. He said ISIS is nor Islamic when they certainly are. They are radical Islamic as opposed to  peaceful  Islamic and they are a state now controlling a mass of land that size.

Had he not pulled out in such a hurry to keep his campaign promise to end the war, ISIS would not have come in and taken over like they did. George Bush warned of the horrors that would occur if we pulled out too soon and now we are seeing his words coming true. Iraq, Syria and Libya are disasters.

No Mr. Obama America is not safer.  Never forget they said “See you in New York” and “we will raise the Islamic flag over the white house.” The 9/11 commission said they are at war with us we are not at war with them. Our borders are so pourous and we’ve seen people from Yemen, Pakistan, Iraq and Syria coming thru there. We have thousands of mosques in this country many of which recruit and brainwash young people into jihad.

Obama should have gone before congress first with his proposals instead of asking for their support in his public speech last night. Lt. Col. Ralph Peters said. “All Obama is doing is kicking the can down the road for the next president like Bill Clinton did with Al Queda.”

Obama also gave a little campaign speech (probably because of the upcoming elections) in his speech saying the economy is on the mend when he knows it isn’t with 92 million people unemployed. Again listen to what he says and think the opposite. To paraphrase a Bee Gees song, “It’s only words and words are all he has.”

Republicans to Obama: Great Speech but Let’s See the Strategy
WE WILL DESTROY THEM…
WILL TAKE TIME TO ERADICATE THIS CANCER…
THIS IS NOT OUR FIGHT ALONE…
MORE TROOPS…
YOU WILL FIND NO SAFE HAVEN…
OBAMA: ‘ISIS is not Islamic’…
President who wanted end wars tries to justify a new one…
Support Conservative Daily News with a small donation via Paypal or credit card that will go towards supporting the news and commentary you've come to appreciate.
Tags
Politics