Nobody at the office got any work done yesterday. We were all watching the live video of Batkid saving San Francisco–I mean, Gotham City. Of course, I should amend that statement: I work for a major radio station in SF, so watching Batkid was my job. We had to make sure people knew where the action was, and keep them up-to-date on the latest developments. It’s not every day that the Riddler robs a bank or the Penguin kidnaps the mascot of the local baseball team (to remain nameless, because I’m an A’s fan). When we switched over to business news at one point, somebody called and said, “We don’t care about the stock market, put Batkid back on.”

All work days should be so tough.

At first I thought this would be a great local story. Make-A-Wish and San Francisco teaming up to give a 5-year-old cancer survivor the chance of a lifetime, to be a genuine superhero, because what 5-year-old boy doesn’t dream of that? When we first heard of it, many eyes rolled. How silly it sounded. Nobody expected the city to grind to a halt for one of the best reasons imaginable. Crowds turned out all over town to watch Batkid; the local paper printed up a special edition (with articles written by such legends as Clark Kent, who isn’t cheap); we had a chopper tracking the motorcade, but the Batmobile was so fast our pilot couldn’t keep up! Our reporters on the ground, believe it or not, got stuck in traffic. Events moved so fast that we almost missed the Riddler’s capture.

But this story didn’t stay local. It went, as the saying today goes, viral. The national media was there, too. Twitter exploded with activity. Even President Obama got involved, because he can’t let anything happen without him, but this time I don’t particularly mind. Obama is news; what he says is news; when he said, “Way to go, Batkid,” that clinched the deal. Batkid became a thing.

It’s not hard to see why. This is the only feel good story we’ve had in the last decade, a decade filled with political strife, terrorism, economic collapse, doom and gloom, and that goddamn Miley Cyrus. Batkid is the only story–the only story–to make everybody stop focusing on themselves and the rest of the world’s garbage and pay attention to a boy who survived cancer and wanted to run around and be silly. We all got to be silly with him, and for one day, our problems went away. You can’t buy a day like that. 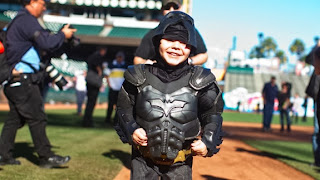 It’s unfortunate that, in our 24-hour non-stop news cycles, this story will fade by Sunday. It may make a “week in review” segment on the Sunday morning talk shows, but by Monday morning, Miles Scott and his adventure will be gone. San Francisco will have returned to normal, if by “normal” you mean one of the worst examples of liberal government in the world, where the streets have an awful stench, traffic is a nightmare, Subway can’t sell a foot long sandwich for $5 and you can’t get a good burger for under $10 because of local taxes, some of which go to fund healthcare for the city’s ten million homeless derelicts who crap in the street.

But yesterday, that didn’t matter. I actually liked being in San Francisco yesterday. And the irony is, Miles Scott is from Oregon. Portland, apparently, was too busy to bother with him. Suck it, Portland.

BRIAN DRAKE is a 20-year broadcast veteran in California and the author of The Rogue Gentleman, a thriller in the tradition of Vince Flynn and Brad Thor. Follow him on Twitter.

Support Conservative Daily News with a small donation via Paypal or credit card that will go towards supporting the news and commentary you've come to appreciate.
Tags
Humor/Satire Politics