From The Boston Globe:

The calls say Gingrich has not returned the organization’s survey, adding, “Maybe it’s because of his past support for gun control.”

The National Association for Gun Rights is a Virginia group run by a gun rights lobbyist. Gingrich spokesman R.C. Hammond directed questions about Gingrich’s positions to Gingrich’s website – which notes that Gingrich is a supporter of the more well-known National Rifle Association, which has given him top ratings and awarded him a “Defender of the Second Amendment award” in 2010.

There is considerable disingenuity on both sides of this story.

Let’s start with National Association for Gun Rights- an organization run by a man named Dudley Brown. According to emails I recieve from the organization (yes, I’m on the mailing list, if only because I’ve been too lazy to unsubscribe and the emails go directly to my spam folder anyway), if “members” don’t “help”, Mr. Brown might go to jail: 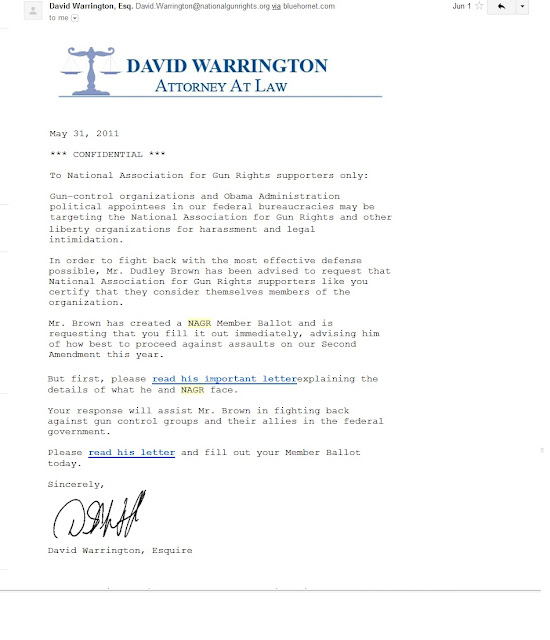 (email has been cropped)
The email is made to look like an “official” confidential communication from an attorney’s office, yet it’s sent out to an untold number of people. Another recipient of the email reproduced it here for discussion on GunBroker’s forum.
From the letter linked in the email:

If the gun-grabbers get their way, this could be the LAST letter I write you.

Anti-gun lawyers and their pals in the federal bureaucracy have targeted the National Association for Gun Rights for ELIMINATION.

Of course, I’ve had radical anti-gun groups and their pet lawyers, judges and politicians come after me before.

I’ve even been threatened with jail time in the past for my uncompromising defense of your Second Amendment rights.

But unless you act TODAY, I’m afraid the gun-grabbers could finally succeed in shutting me up — and shutting the National Association for Gun Rights down.

That’s why it’s vital you fill out the National Association for Gun Rights’ MEMBER BALLOT I will link to in a moment.

You see, at the request of my attorney, David Warrington — a close friend, former Marine and Chairman of the NAGR’s Board of Directors — I’ve just finished a series of meetings with several lawyers who are all experts on grassroots organizations.

These lawyers specialize in defending pro-freedom groups like NAGR against spurious attacks from left-wing groups and their allies in the federal bureaucracy.

Going into it, I thought it was just a formality.  After all, NAGR doesn’t do anything wrong.

After all, left-wing groups like MoveOn.org and ACORN are renowned for their underhanded tactics, yet they seemingly get away with murder and always seem to get off scot-free!

The attorneys told me not to be naïve.

They said President Obama has stacked EVERY last bureaucracy in Washington with radical left-wing extremists — all of whom HATE the National Association for Gun Rights and anyone who stands for freedom.

And if they believe they have the opportunity for a “quick kill,” they won’t hesitate to drag NAGR into court.

That’s why it’s vital you fill out this MEMBER BALLOT IMMEDIATELY.

You see, those attorneys told me my defense will be strongest only if as many folks as possible certify each year that they do consider themselves to be members of NAGR.

Aside from the supposed risk of imprisonment, this is stock-standard stuff for some organizations. At the end of the “ballot”, the new “members” are asked to donate money.

Here’s the interesting part: Among the emails I’ve recieved from NAGR, some have been addressed from Rand Paul:

I’ve omitted the body of the email for the sake of brevity- it’s similar in theme to the above-mentioned items, citing a UN-led attempt to ban guns in the United States (a claim which has some merit, and I may cover it in another post).

So, we have a organization with which Rand Paul (son of Presidential contender Ron Paul) is associated, which uses the tactic of claiming that their executive director may face legal action if a survey isn’t filled out by many people (and they need money too, of course).

Oh, and NAGR has also laughably tried to cast Rick Perry in an “anti-gun” light because he hasn’t filled out their stupid questionnaire:

With his deadline close to passing without having returned a survey, Rick Perry is teetering on the edge of being added to this infamous group of Republicans who refuse to tell gun owners where they stand.

Suffice it to say, this organization is pretty tacky.

However, with regards to Newt Gingrich’s gun rights record, NAGR is correct.

Gingrich did support requiring a thumbprint to purchase a firearm. From the Boston Globe article above:

The thumb print scan reference was based on a 1997 CNN story in when Gingrich said he would prefer an instant background check, based on thumb prints, to determine whether the buyer was a convicted felon or someone with dangerous mental behavior, rather than a background check process instituted by the Brady law.

Aside from the fact that nobody has to submit fingerprints to exercise any other Constitutional rights, there’s a problem: This measure would require the federal government to keep a record of every buyer’s thumbprint, creating a national registry of gun owners. This would violate the Firearm Owners Protection Act of 1986 (FOPA)- a law signed by Ronald Reagan to prohibit the federal government from maintaining exactly such a database (current NICS records have to be destroyed after 90 days to comply with FOPA).

On the subject of FOPA, Gingrich voted “YEA” on the Hughes Amendment- which banned the further acquisition of machine guns- which was added (in violation of House rules) to FOPA prior to its passage. Here is a (PDF) of the Congressional Record from that vote.

And on the subject of the Brady law: Among other things, it used the Commerce clause of the Constitution to regulate firearms (as all federal firearms laws do). Portions of the Brady law were struck down by SCOTUS on Tenth Amendment grounds, because the law mandated state and local governments to perform background checks on behalf of the federal government.

Although Gingrich voted against it, his suggested substitute preserved most of the Brady law, merely substituting thumbprint scanners for the NICS system. Gingrich’s advocacy of thumbprint scanners parallels his attitude on other big-government programs– such as his idea to reduce the cost of Medicare and Medicaid by “modernizing the system”- as if using technology to streamline big government makes big government acceptable.

In 1996, Gingrich voted “YEA” on the Lautenberg amendment, which prohibits a person from possessing a firearm if convicted of a misdemeanor offense of domestic violence. This sounds reasonable at first, until one reads the text of the act- it violates the Constitution in several ways, including violation of the ex post facto and due process clauses; and the definition of “domestic violence” is so broad that it actually can be applied to a parent spanking their child (even if state law says the spanking is excuseable). The Lautenberg act has been challenged several times in federal court, unsuccessfully.

It’s true that Gingrich voted against the 1994 Assault Weapons Ban- but not necessarily because he opposed a ban on “assault weapons”. Here’s the quote from Gingrich, in an interview with Hugh Hewitt:

HH: “…Do you support allowing individuals to own those weapons labeled assault weapons under that law?”

NG: “Well, if you remember, there are a number of weapons under that law that are not assault weapons, and the law the way it was written in the Clinton administration is an absurdity. And I think people proved that at the time. And I voted against the law, and in fact, I helped stop it at one point.”

Newt’s correct that the AWB was an absurdity. It banned the possession of firearms based solely on cosmetic features such as a carrying handle or a guard which prevents the hand from being burned by touching a hot barrel. The troubling part of this is the implication that he voted against it only because it also banned some firearms he considers ‘acceptable’ for civilian possession.

It should also be noted that Gingrich, as speaker, held a vote to overturn the AWB. Whether this was due to his sincere belief that the AWB should be overturned, or because he was answering to the same public opinion which swept the “Class of ’94” into Congress is anyone’s guess.

Lastly, as for the campaign’s defense that Newt is an NRA-recognized “Defender of the Second Amendment”: This isn’t an “award”, it’s a novelty item mailed out to many, many NRA members over the years for making donations. I, myself, recieved a “Defender of the Second Amendment” certificate in the mail at age 16 or 17. I don’t remember how much I donated, but at that age it couldn’t have been much. It was a nice certificate, too- it looked like it cost the National Rifle Association at least a dollar to produce. You know who else has one? Harry Reid.

In sum: A tacky, misleading, money-grubbing organization associated with Rand Paul is robo-calling people to warn them about Gingrich’s record (and only Gingrich, not Romney, who has a similarly undesirable gun control record). Gingrich’s record on firearms is shady at best: He has a few acceptable votes on gun rights, but likely made those votes for the wrong reasons; he voted for legislation which misuses the U.S. Constitution’s Commerce clause to regulate firearms, and which violates the Due Process clause and the Ex Post Facto clause; he favors a national registry of gun owners (or at least, gun owners’ thumbs); and he voted to insert a gun ban into a law intended to protect gun owners. And Gingrich’s defense invokes a novelty item no more significant than a coffee mug.

Sensible gun owners would do well to vote in the primary for a candidate with a clean gun rights record. Someone like Rick Perry, for example.

Photos at top by Gage Skidmore via Wikipedia.org