Herman Cain took the opportunity to school the entire MSNBC Round-table after the Reagan Library debate last night.  He picked off every tired, predictable talking point (favor the rich, hurt the poor, women and minorities, etc.) starting with Al Sharpton, who managed to sound like the Constitutional idea of states’ rights was more disgusting than the Rev’s greasy hot comb at the end of a long week.  Cain did not back down, refuted every ridiculous assertion and was able to highlight his agenda.  Cain is currently running at the back of the pack, but he’s the candidate that just won’t go away.  He seems to be one of the few GOP’ers who gets better with each appearance.  Is this because he was so “green” in the beginning that any improvement seems big, or is Herman Cain becoming a genuine candidate? 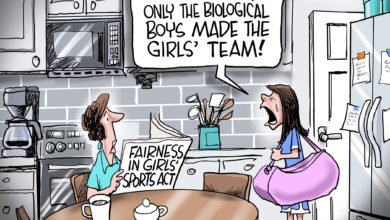 Boys on the Girls’ Team

It’s Not Government’s Job to ‘Root Out’ Misinformation