Just when we thought we had heard it all concerning the corruption in our nation’s capitol, along comes a group calling itself “Miracle Hands Inc.” In Washington D.C., the Inspector general has filed a lawsuit against Miracle Hands for using $330,000 of your tax dollars to… open a strip club! Tied into this taxpayer fraud are several D.C powerplayers, a convicted drug kingpin, assorted lawyers, and even the head of a D.C. HIV/Aids agency that was in charge of distributing taxpayer dollars,and who after being fired went to work for “Miracle Hands.” And the fraud didn’t stop at a mere $330,000 grand either.

From TheWashingtonTimes we see this:

From 2004 to 2008, Miracle Hands received more than $4 million from the D.C. HIV/AIDS Administration. In 2008, the group was tainted by an FBI raid and complaints from city monitors and former clients that it had misused city funds.

Enter one Debbie Rowe, the above mentioned former administrator for the D.C. HIV/Aids program that handed out all of these grants. She reportedly now works for Miracle Hands. Low and behold, Ms. Rowe was fired in… 2008, the time that $4 million in grants was handed out to corrupt officials and notorious drug kingpin Mr. Cornell Jones, AKA The Ghost. Mr. Jones did time in prison, and also has a serious problem with the IRS and income tax evasion. Again we see how high this corruption goes, as Mr. Jones apparently has yet to pay his back taxes, and the IRS has decided that the taxpayers have no right to that information:

Federal court records show Mr. Jones owned several businesses and numerous residential properties in the District and Maryland used to launder money and to store and prepare narcotics for distribution. He used friends and family members to conceal his drug-dealing activities, the records show. In the investigation leading to his arrest and 1986 conviction for drug trafficking, detectives found $586,300 in cash in a safe-deposit box in the name of his father and mother.A federal tax court slapped Mr. Jones with a $16.5 million judgment in 1990, saying he had failed to report income on $33 million in drug sales from 1985. Mr. Jones was released from prison in 1995 after serving the low end of a nine- to 27-year sentence. The Internal Revenue Service declined to comment on the status of Mr. Jones’ tax debt.They even made a movie about him titled American Gangster

As reported last week by The Washington Times, claiming it is a sexually oriented business that should have been denied a permit. The club is co-owned by politically connected developer Keith Forney, a donor of unspecified amounts to D.C. Council member Harry Thomas Jr.’s nonprofit group Team Thomas.

Though the FBI confirmed the investigation in 2009, the bureau would not comment for this article. However, since 2009, Miracle Hands has continued to receive city funds in excess of $1.5 million, according to figures released by the chief financial officer’s office, bringing the group’s total city funding since 2004 to more than $5.8 million.

Nearly a year since the Stadium Club opened as a high-end strip club with a premium steakhouse and private rooms at 2127 Queens Chapel Road, the websites for the Health Department and HIV/AIDS Administration still direct city residents seeking social services to Miracle Hands — at 2127 Queens Chapel Road. I offer the screenshot of this farce of a taxpayer funded group,and teh false claims they make from their very own website: 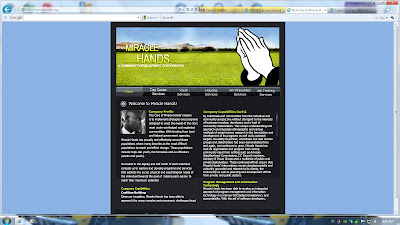 A city grant monitor informed Rowe that Miracle Hands funding grants should be stopped immediately, yet Rowe refused to adress the problems, instead calling Mr. Jones and company.

The monitor advised Rowe that Miracle Hands’ funding should be cut. But Rowe, called a “close friend of Jones” in the lawsuit, reportedly said the project was on pace and kept the funding in place. By then, though, Jones had already transferred a liquor license from a strip club he owned in Southeast to the Miracle Hands warehouse in Northeast, the suit said

When we ask ourselves if anyone will see actual prison time here, we have to consider a few facts concerning just who was involved. Big time connected D.C. lawyers and developers are in bed with a notorious drug kingpin whom the IRS refuses to tell us how much of the $16.5 million dollars in taxes that he did not pay has been paid back. City councilmen and D.C. grant program administrators are also heavily involved. I am a realist and will go on the record right now in informing you that not one person will see actual jail time and/or fines as a result of this massive taxpayer fraud and DC corruption, not one. This is just business as usual in Washington D.C. today. The taxpayers are being raped by government approved gangsters, and no one has the courage to stand up to them today.

Support Conservative Daily News with a small donation via Paypal or credit card that will go towards supporting the news and commentary you've come to appreciate.
Tags
Conservative News government Politics Politics taxpayers