The Latest News about Jason Chaffetz

Nick Givas January 29, 2019 Comments Off on Jason Chaffetz Explains Why He Thinks Shutdown Negotiations Will End In A Border Wall 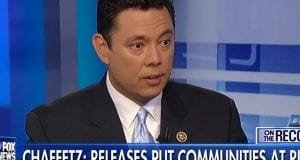 Former GOP Rep. Jason Chaffetz of Utah said the government shutdown negotiations will ultimately end in the construction of a border wall, on “Fox & Friends” Tuesday. Chaffetz said America’s immigration system is under strain and has finally reached crisis levels and should be treated as such. “You’re talking about millions of people flowing. You have this oppression in Venezuela. And then you also have ...

END_OF_DOCUMENT_TOKEN_TO_BE_REPLACED

Jason Chaffetz: Romney Shot Himself In The Foot With Trump Attack

Nick Givas January 3, 2019 Comments Off on Jason Chaffetz: Romney Shot Himself In The Foot With Trump Attack

Former Republican Rep. Jason Chaffetz of Utah said Republican Mitt Romney hurt himself and the GOP by writing an op-ed critical of President Donald Trump in The Washington Post on New Year’s Day. “He hurt the party. I think he also hurt himself,” Chaffetz said Thursday on “Fox & Friends.” “And he hurt the Utahns. He was elected by the people of ...

END_OF_DOCUMENT_TOKEN_TO_BE_REPLACED

Jason Chaffetz Wants Taxpayers to Cough Up $2,500 Per Month Housing Stipend for Congress

Donn Marten June 27, 2017 Comments Off on Jason Chaffetz Wants Taxpayers to Cough Up $2,500 Per Month Housing Stipend for Congress

You have to give it to Congressman Jason Chaffetz, he has some serious chutzpah. The retiring Utah Republican is calling for taxpayers to cough up an additional $2,500 per month for members of Congress as a housing stipend. That would be a total of $30,000 per year for all 535 lawmakers. According to the outgoing House Oversight Committee chairman, it’s ...

END_OF_DOCUMENT_TOKEN_TO_BE_REPLACED

R. Mitchell May 25, 2017 Comments Off on FBI misses deadline to deliver Comey’s memos 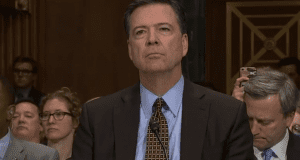 The FBI missed a deadline for handing over fired FBI Director James Comey‘s documents concerning President Donald Trump. The special counsel investigation has caused the agency, filled with lawyers, to require more time to “consult” on the matter, according to a letter from the FBI’s Office of Congressional Affairs sent yesterday. “In light of this development and other considerations, we are ...

END_OF_DOCUMENT_TOKEN_TO_BE_REPLACED

Rep. Jason Chaffetz will not run for re-election in 2018

House Oversight and Government Reform committee chairman Jason Chaffetz (R-UT) announced Wednesday morning that he will not be seeking re-election in the 2018 midterm elections. “After long consultation with my family and prayerful consideration, I have decided I will not be a candidate for any office in 2018,” began the official statement released on Chaffetz’ facebook page. The congressman said ...

END_OF_DOCUMENT_TOKEN_TO_BE_REPLACED

Secret Service Targeting: Inevitable End of Power Taking on Life of its Own

Katherine Revello October 1, 2015 Comments Off on Secret Service Targeting: Inevitable End of Power Taking on Life of its Own

Totalitarian regimes are living states. They think and feel and adopt emotional rationales in picking and choosing minorities within the population to aid through legislation. In short, the government adopts all the characteristics of a single human being, including a survival instinct. But because they have a monopoly on power, there is no check to their self-interest, meaning there are ...

END_OF_DOCUMENT_TOKEN_TO_BE_REPLACED

Following a recent visit to the Arizona border by senators, Congressmen Jason Chaffetz (R-UT) and Kerry Bentivolio, (R-MI) toured the Yuma Sector of the Arizona-Mexico border. The following is from Representative Chaffetz’  public Twitter account. They say a picture is worth a thousand words. Most residents of the US have never seen the arid border that is constantly under discussion ...

END_OF_DOCUMENT_TOKEN_TO_BE_REPLACED

Obama, Benghazi, and the Blame Game

Scandals bring out the worst in politicians, and politicians engage in scandalous behavior on a regular basis. Of course the people only end up hearing about the latter when said politicians get caught. Normally, this would happen as the result of members of the traditional media uncovering their dastardly deeds, but the age of investigative journalism in the mainstream media ...