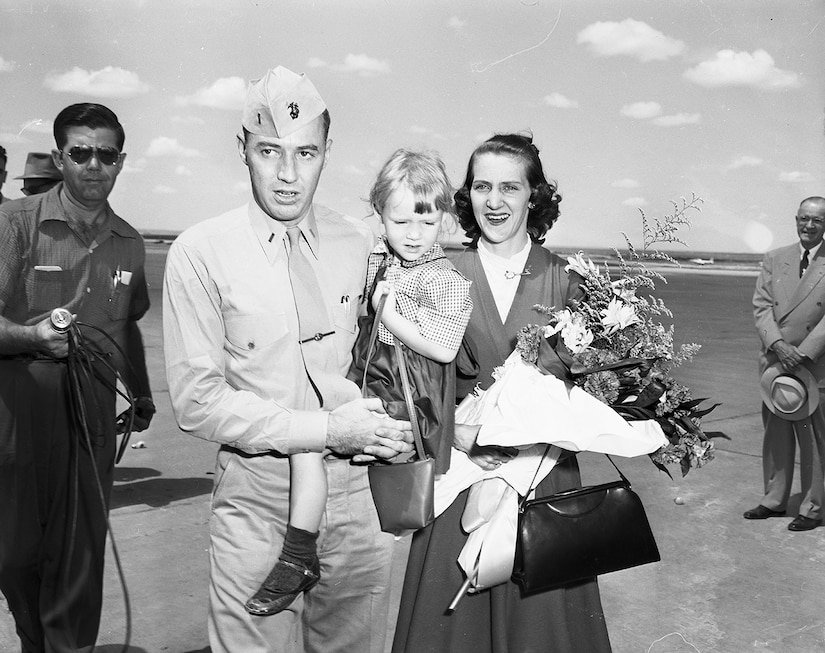 Marine Corps Maj. George Herman O’Brien Jr. led several “kids,” as he described them, into a lopsided battle to maintain the main line of resistance in Korea. His daring and forceful leadership inspired the men around him, which helped them push the enemy back. For his bravery, O’Brien earned the Medal of Honor.

O’Brien was born Sept. 10, 1926, in Fort Worth, Texas. His father, George, was a traveling salesman, and his mother, Della, was a minister, according to the Texas State Historical Association.

O’Brien’s parents eventually moved him and his younger brother, Larry, to Big Spring, Texas, where they grew up. O’Brien — a self-described problem child — said he went to a few different schools because he was disruptive in class. He said he was finally given a wartime diploma from Big Spring High School in 1944.

O’Brien then spent about a year and a half as a Merchant Marine on a gas tanker, which included a stint in the Pacific Ocean during the end of World War II. He eventually swapped that for college, attending Texas Tech University and graduating in 1950 with a degree in geology. During his college days, he also joined the Marine Corps Reserve.

In November 1951, O’Brien was called to active duty. He was commissioned as an officer at Marine Corps Base Quantico, Virginia, and then trained at Camp Pendleton, California, before being sent to fight in the Korean War with the 7th Marines, 1st Marine Division in September 1952. There, he became the commander of 1st Platoon, Company H of the 3rd Battalion.

Less than two months later, the then-2nd lieutenant would take part in the fight of his life.

On Oct. 27, 1952, O’Brien’s unit was one of many defending the 38th Parallel, the main line of resistance, when they learned that another company that was holding a vital hill in an area known as The Hook was overrun by a huge Chinese force. O’Brien’s company had been waiting in reserve for hours but was soon told to retake the hill.

“They moved us up as far as they could with the trucks. We marched the rest of the way,” O’Brien said, referring to the area where the other Marines had been overrun. “There was no trench line there. It had been completely wiped out with bombs and mortars and artillery, and there were several straggling troops there.”

As his platoon prepared to make their assault, the enemy bombarded them with mortars and artillery. That didn’t stop O’Brien, though. When he got the signal, he leapt from his trench and shouted for his men to follow, then raced across an exposed area and up the enemy-entrenched hill through a hail of gunfire.

As he got within range of the Chinese soldiers, he was shot in the arm and thrown to the ground. But he got back on his feet and waved his men on as he continued to spearhead the assault, even as he stopped to help a wounded Marine.

O’Brien hurled hand grenades into enemy bunkers and killed at least three enemy soldiers in hand-to-hand combat. He was knocked down three times by concussion grenades, but each time, he got back up, refusing medical treatment. For four hours, O’Brien continued to keep up the assault and encouraged his platoonmates to push forward, too.

When a lull came in the attack, O’Brien organized his remaining men in a defensive position just in case the enemy returned. He personally checked each spot, then helped the wounded while expediting their evacuation. When another unit eventually came to their relief, O’Brien stayed behind to cover the withdrawal of his platoon to make sure no one was left behind.

Thanks to his efforts, U.S. forces recaptured the hill. However, it came at a cost he would never forget.

“We moved in on our objective, and we took it. [But we] left a lot of good kids [behind],” he said through tears during a Veterans History Project interview decades later.

O’Brien earned a Purple Heart for his actions. He was treated for his injuries on a hospital ship, but he returned to combat a few weeks later. He earned a second Purple Heart for more wounds he suffered later in his deployment.

The young 2nd lieutenant returned to the states with other troops on a transport ship in the summer of 1953. Along the way, he learned some big news.

“When we were coming into San Francisco harbor, one of my friends picked up the radio from San Francisco, and he told me, he said, ‘George, I just heard over the radio that you are going to receive the Medal of Honor,'” O’Brien remembered.

A year to the day after his actions in Korea, President Dwight D. Eisenhower presented O’Brien with the nation’s highest medal for valor during a White House ceremony.

Seven other service members received the honor that day, too. O’Brien said he and three of the other recipients – Marine Corps Capt. Ray Murphy, Army Cpl. Hiroshi Miyamura and Marine Corps Pfc. Bob Simanek — grew very close afterward and met every year for many years after that.

O’Brien said the Medal of Honor represents the immense sacrifices made by the Marines he led in war — those who came home and those who didn’t.

“This medal’s not mine. It belongs to those kids who never grew up to be grandfathers,” he said through tears. “It’s in trust, and I hope I wear it well.”

After the war, O’Brien returned to West Texas to work in the oil and gas industry as a petroleum geologist. The state historical association said he also operated wells in southeastern New Mexico.

O’Brien stayed in the Marine Corps Reserve, retiring as a major in 1963. He married twice and had two sons and a daughter. One son, Mike O’Brien, said his father rarely talked about his war days or the accolades he received. Those who knew him said he was humble and gracious.

O’Brien died on March 11, 2005, in Midland, Texas. He was buried in Texas State Cemetery in Austin.

His name lives on in the places he called home. The veteran’s medical center in Big Spring was renamed the George H. O’Brien Jr. Department of Veterans Affairs Medical Center in January 2012. In March 2020, O’Brien’s medal was loaned to Texas Tech so it could be put on display. His son, Mike, said he thought it was time to share it with the university that his father loved.