Brian Wilkins was just weeks away from graduating high school last May when he took a pill he didn’t know contained a lethal dose of fentanyl.

His mother, Jennifer Volbrecht, has joined a community of thousands who have lost loved ones to fentanyl. During a 12-month period ending in November 2021, it is estimated that over 106,000 people died of drug overdoses.

Volbrecht described her son as her “rock” and the funniest kid with the biggest heart.

“I was a single mom for a long time,” Volbrecht told the DCNF. “My daughter, his sister, is 22 and has autism. He always promised me, ‘Mom, I’ll take care of her.’”

In the month before he died, Brian struggled with what Volbrecht sensed was likely depression. She said his decline happened so quickly, as he was readying to graduate high school and as COVID-19 lockdowns moved school online, that it was hard to notice any warning signs.

Brian had used marijuana in high school, but it wasn’t until two weeks before he passed that his mom learned he had taken a Xanax.

Volbrecht was trying to be supportive, but, ultimately, had to kick Brian out of the house.

“He was just a different person … and I was worried for all of us … But at the same time I was worried about him, but I was trying to be a mom and say ‘look, you’re not going to do drugs in my house,’” she said.

He got a girlfriend, who Volbrecht believes introduced him to Percocet.

The night Brian died, he said he was going with his girlfriend to a concert. He actually went to a house where he took a counterfeit Percocet purchased over Snapchat that was laced with fentanyl, a precursor chemical to fentanyl, and likely ecstasy.

“There were three other kids there and a mother, and he died on the floor in that house, while they all watched and did nothing … ” Volbrecht said.

“I’m 100% positive my son didn’t know even what fentanyl was, nor did we until this happened,” Volbrecht said.

“Basically, the medical examiner said that there were no pill fragments in his stomach, so they think that it was just one pill,” she continued. 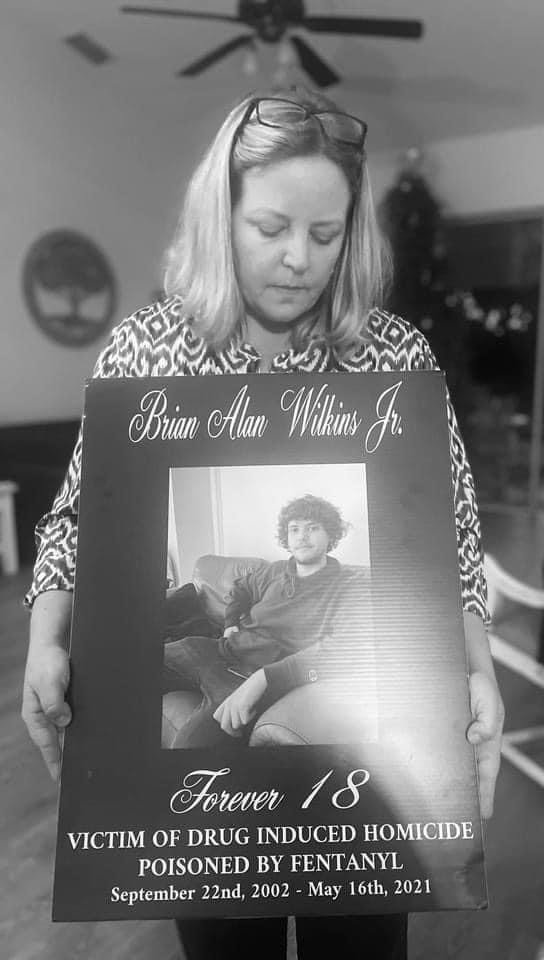 Tiffany White’s daughter Abigail was 22 when she died.

Abigail overcame many obstacles in her life, including addiction, before she took one lethal counterfeit pill.

Abigail struggled when she was young with her parent’s divorce, White told the DCNF. Abigail’s father later got remarried to a woman White described as “very abusive to Abby.” White eventually got full custody of Abigail, but life was still difficult for her daughter.

“Abby lived with me permanently and her dad basically didn’t talk to her for 8 years,” White said. “So, during that it was difficult. She was cutting. The anxiety and depression was really bad.”

White sought professional help for Abigail and put her in virtual school because of bullying, and things got better.

But White began noticing problems when Abigail enrolled in cosmetology school, where she met some girls that used drugs.

“I had no idea. But the addiction was so fast,” White said.

Abigail later went to live with her father after White confronted her.

“She got mad and she went to go live with him, which was a big mistake …  because he is a huge alcoholic,” White said.

In April 2021, White got a call that Abigail was in a medically-induced coma after she took what she thought was cocaine, but turned out to be heroin and fentanyl.

“They didn’t think that she was gonna survive,” White said.

Abigail awoke 9 days later without the ability to talk, walk and eat. After a month, Abigail went to rehab to relearn basic functions.

“She now had a seizure disorder, she had tremors, she couldn’t … write, definitely couldn’t cut hair or put makeup on … ” White said.

Abigail swore off drugs and later got pregnant, forcing her to take a lower the dose of her medication, leading to frequent seizures.

After having her baby, Abigail was prescribed a low-dose of Xanax, which helped ease her shaking and tremors, until she ran out of her prescription and realized her boyfriend had been taking it.

Abigail couldn’t get a new prescription, so she bought Xanax “from somebody that she trusted,” White said.

That pill turned out to be about 5 times over the lethal amount of fentanyl.

“With the brain injury and stuff, it was just so hard for her to do stuff,” White said. “And the depression. And then COVID hit and it was just isolating … ”

Of Abigail’s friend group of about 6 or 7 people, two of them are still alive. The rest died from fentanyl.

“We allowed it because it was his only real means of social interaction outside of us,” Luca’s mother, Amanda Faith Eubanks, told the DCNF.

One day in Aug. 2020, a drug dealer on Snapchat convinced Luca, who was 13-years-old at the time, to buy what he thought was a Percocet pill, his mom said, adding that her son had had a painful root canal the week before and was initially seeking marijuana to ease the pain.

The Drug Enforcement Administration (DEA) warned in December that cartels are using social media to flood the country with fentanyl.

“He was offered a Percocet,” Eubanks said. “It, however, was not a Percocet. It was pure fentanyl, and the dealer sold it to him knowing that it was fentanyl, and knowing how dangerous fentanyl is. I think that’s an important distinction, and that’s why he’s now charged with first degree murder.”

The pill that Luca bought from Snapchat was pressed to look like a Percocet, but was actually 10 times the lethal dose of fentanyl.

Eubanks hopes that what happened to her son won’t happen to anyone else and she’s made it her mission to share Luca’s story as a warning to parents, emphasizing the dangers of social media.

“He was met by a predator on Snapchat,” Eubanks explained. “And I mean social media is a dangerous place anyways, but Snapchat is particularly nefarious with encrypted messages and things disappearing, I would never allow my child to have Snapchat now. Not because he died, but because as I looked more into Snapchat there’s no reason to have anything where messages disappear.”

Support Conservative Daily News with a small donation via Paypal or credit card that will go towards supporting the news and commentary you've come to appreciate.
Jennie TaerMay 1, 2022
1
Facebook Twitter Reddit Telegram Share via Email Print