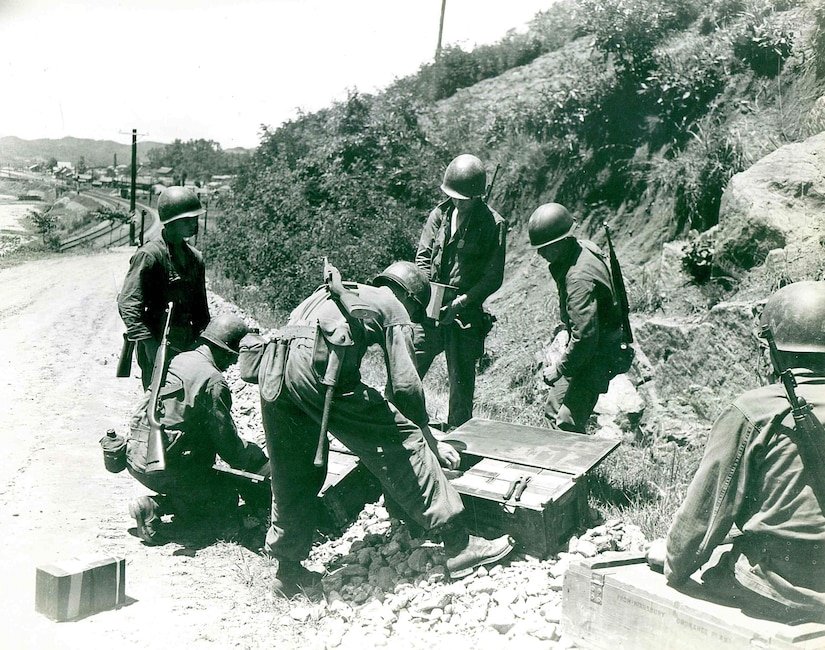 Army Sgt. 1st Class Nelson Brittin survived World War II and left the service only to return to it in time for another war to begin. He was 30 when he sacrificed his life for his fellow soldiers in Korea. That sacrifice earned him a posthumous Medal of Honor.

Brittin was born on Oct. 31, 1920, in Audubon, New Jersey, to Wesley and Anna Brittin. He had four sisters and three brothers.

Brittin graduated from Audubon High School in 1938. About four years later, he was drafted into the Army and fought in Italy during World War II. He was discharged in 1946 and, according to the (Camden, New Jersey) Courier-Post newspaper, stayed in Italy for six months to study at the University of Florence.

But in 1948 he chose to re-enlist. Brittin did a tour of duty in Japan with the post-war occupation forces before heading to Korea to teach English to children, an article in the Courier-Post said. When war broke out there in June 1950, Brittin was placed squarely in the thick of the fight. He was part of the 3rd Battalion, 19th Infantry Regiment of the 24th Infantry Division and was injured during battle in December 1950 and in February 1951.

On March 7, 1951, Brittin was with Company I in Yonggong-Ni in north-central South Korea. Now a sergeant first class, he volunteered to lead his squad up a hill. There wasn’t much cover to protect them from intense enemy fire, so Brittin asked his squad mates to cover him while he moved forward and tossed a grenade at the nearest enemy position.

Brittin was knocked down by an enemy grenade when he got back to his squad, but he refused medical attention. Instead, he gathered more grenades and went back into battle mode, hurling the explosives toward hostile positions, then shooting enemy soldiers as they fled. At one point, after his weapon jammed, he quickly jumped into a foxhole and used his bayonet and the butt of his rifle to kill the enemy soldiers inside.

Brittin kept moving forward and taking out enemy foxholes. When he realized his squad had been pinned down, he rushed to the back of an enemy machine gun position and tossed in a grenade. Just as quickly, he ran back to the front and shot and killed all three enemy soldiers who ran out to escape the explosion.

The squad had made it fewer than 100 yards up the hill when they were attacked again, this time by a camouflaged, sandbagged machine gun nest that was flanked by enemy riflemen. Brittin charged the nest to silence it. Unfortunately, he ran directly into a burst of automatic gunfire and died instantly.

Brittin’s decisive actions were key to his squad’s morale and success. By killing 20 enemy soldiers and destroying four automatic weapons, he helped them reach their objective.

For his sacrifice, Brittin earned the Medal of Honor. It was presented to his parents by Defense Secretary Robert Lovett on Jan. 16, 1952, during a Pentagon ceremony. Nine other fallen soldiers also received the nation’s highest honor that day.

Brittin’s body was returned to the U.S. in November 1951. He was buried in Beverly National Cemetery in Beverly, New Jersey.

Brittin’s memory lives on, both in his hometown and in the military. A VFW post near where he grew up and an Army Reserve Center in Camden, New Jersey, were named in his honor in the first year after his death. In the Navy, the sealift ship USNS Brittin, which has been in service since 2002, was named for him as well.