Florida is the Sunshine State, and Governor DeSantis has done his best to keep it the beacon of freedom since 2019. He kept his people free and safe during the Pandemic and had the state economy thriving while other states tried to get traction. DeSantis has been a fearless leader who never sways from his Conservative ideals and is one of the reasons that Florida is a destination for people escaping blue states like Michigan and New York. He had a tough act to follow in Rick Scott, who had to leave the office because of Florida Term Limits, but he has more than filled Scott’s shoes.

The Governor signed into law this week the  Parental Rights in Education Bill. This Bill protects Florida’s children in Grades K through 3 from exposure to various forms of sexual education. HB 1557 ensures that parents of young children can send their kids to kindergarten without gender ideology being injected into classroom instruction. Parents will be notified about and have the right to decline healthcare services offered at schools for their kids.

This law is not only a win for young students but also for parents who teachers and administrators are working tirelessly to keep out of the classroom. School Boards and Administrators contend that they are the educated experts and know what is best for the children in their charge. They universally claim that the parent has no place in the education process. Of course, indoctrination of children is much more difficult when under the watchful eye of parents.

Parents are fighting back, but they need to press harder. In New Hampshire, we had a very active group of concerned parents running for School Board positions. One out of the group of nine was successful in replacing an incumbent. Some may say that is a small victory, but we need a sweep. With CRT permeating all grades and multiple lawsuits against the local SAU, we need to cut the problem off at the head. We need to displace these superintendents and directors. They are the poison in the veins.

We all need to funnel our inner Ron D. In three years, he has faced down every issue. He does his research, establishes the best resolution for the state, and gets it passed. He takes criticism with every move, but it seems to energize him. He may be the lead pick for the GOP candidate in 2024, but right now, he wants to be the best Governor for Florida.

On the other end of the spectrum is Gavin Newsom. The WOKE Governor of California is driving the state to bankruptcy and moral depravity. Every decision is for the benefit of the Left. Newsom’s comments on the Bill signed by DeSantis are laughable. 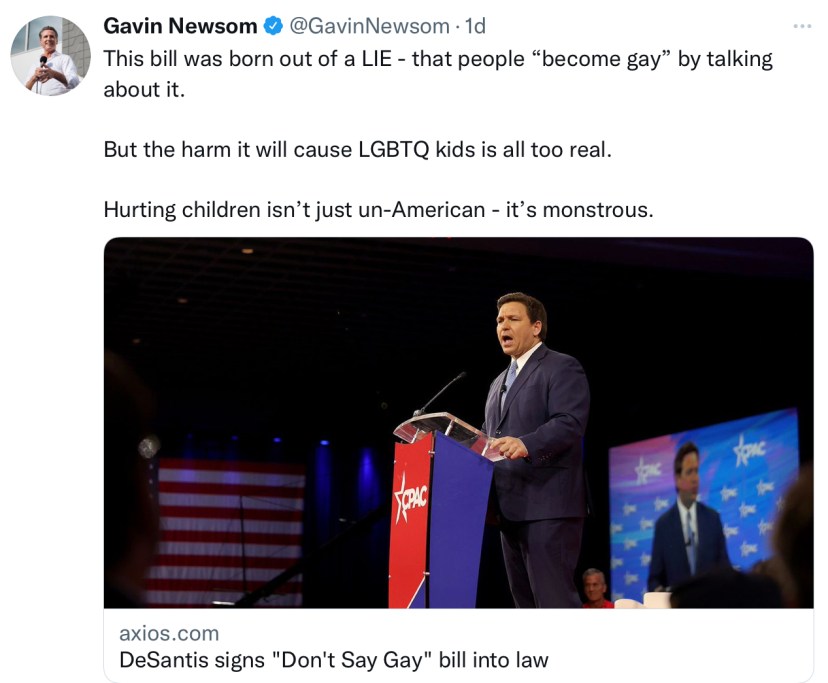 Newsom calls Florida’s bill monstrous while his state considers its own Parental Freedom Bill which allows “parents” to dispose of their newborn child up to four weeks after birth with no penalty. The bill may be freedom for the parents but it is most certainly murder and, Governor Newsom, THAT is monstrous.

Support Conservative Daily News with a small donation via Paypal or credit card that will go towards supporting the news and commentary you've come to appreciate.
Tags
Ron DeSantis