The Texas Heartbeat Act, which bans most abortions after around six weeks of pregnancy, is still in effect after the Supreme Court rejected a request to remand the law.

The justices sent the case back to a state court for procedural determinations, according to Fox News. Justices Breyer, Kagan and Sotomayor dissented.

“The law immediately devastated access to abortion care in Texas through a complicated private-bounty-hunter scheme that violates nearly 50 years of this Court’s precedents,” Sotomayor wrote.

The Texas law violates the precedent established in Roe v. Wade, according to its critics, which blocks states from unduly restricting abortion before the viability of the pregnancy.

The Heartbeat Act, passed in May 2021, is enforced through lawsuits by private citizens rather than directly by the state, making it difficult for abortion providers to sue on constitutional grounds. Justice Brett Kavanaugh expressed concern during the November 2021 oral arguments that the structure of the bill could be replicated to restrict constitutional rights such as free speech or the right to bear arms.

The court ruled in December 2021 that abortion providers could sue the state over the law, but it did not rule on the law’s constitutionality. The law has been in effect for over four months.

The court is also considering Dobbs v. Jackson Women’s Health during its current term, a case that directly challenges Roe v. Wade. If the court overturns Roe, states would once again be allowed to create laws restricting abortion at any point in pregnancy.

Support Conservative Daily News with a small donation via Paypal or credit card that will go towards supporting the news and commentary you've come to appreciate.
Tags
abortion The Supreme Court of the United States
Laurel DugganJanuary 21, 2022
Facebook Twitter Reddit Telegram Share via Email Print 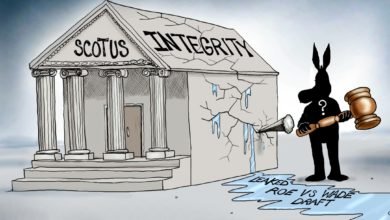