Leading Republican lawmakers from both the House and the Senate pledged to hold Dr. Anthony Fauci and the National Institutes of Health accountable following a Daily Caller News Foundation report on documents showing the agency had concerns about funding gain-of-function research in China in 2016.

The documents, obtained by the White Coat Waste Project and provided exclusively to the DCNF, show that two subordinates of Fauci reached out to the nonprofit group EcoHealth Alliance in May 2016 with concerns the group was planning to engage in gain-of-function experiments on bat coronaviruses at the Wuhan Institute of Virology, only to drop the issue after EcoHealth downplayed their concerns.

“With these documents, another domino has fallen that shows just how dishonest our public health agencies and officials have been regarding taxpayer dollars they’ve provided to support gain-of-function research. All the while, EcoHealth Alliance continues to receive federal grant money,” said Kansas Sen. Roger Marshall. “I’ve introduced legislation to halt this dangerous research and believe Congress must act to hold those within government and the private sector responsible for their lack of transparency and unaccountability to the American people.” 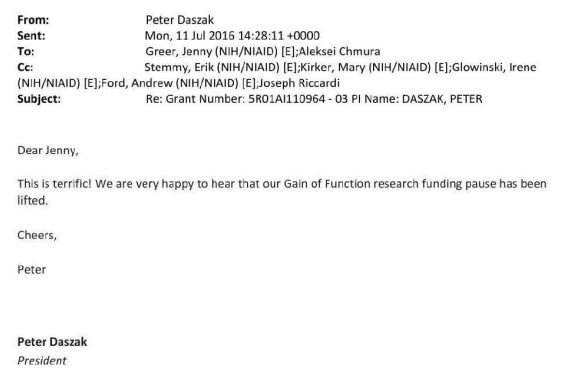 Marshall and Kentucky Sen. Rand Paul sent a letter to the leaders of the Senate Health Committee on Oct. 22 demanding a hearing on the security risks posed by gain-of-function research. The lawmakers demanded the hearing after National Institutes of Health (NIH) Principal Deputy Director Lawrence Tabak informed GOP lawmakers that EcoHealth failed to notify the agency it had created a virus in a Wuhan lab that was more deadly towards mice with humanized cells than the natural virus it was crafted from.

Fauci and the NIH maintain they did not fund gain-of-function research in Wuhan.

Fauci and the NIH also maintain that it is “molecularly impossible” for the viruses that EcoHealth and the Wuhan Institute of Virology were tinkering with prior to the pandemic to have turned into the virus that causes COVID-19.

House Committee on Oversight and Reform Ranking Member James Comer of Kentucky also renewed his pledge to hold Fauci and the NIH accountable for the activities they funded in Wuhan.

“Dr. Collins, Dr. Fauci and EcoHealth are engaging in a classic blame game and trying to shift responsibility to anyone but themselves. What we know is NIH funded EcoHealth and the Wuhan lab, the Wuhan lab conducted dangerous gain-of-function research with taxpayer money on bat coronaviruses to make them more virulent, and this was concealed for two years,” Comer told the DCNF. “What else happened in the Wuhan lab is anyone’s guess.”

“As more and more documents are released it becomes clearer that NIH, EcoHealth, and the Wuhan lab had an improper relationship,” Comer added. “Oversight Republicans are at the forefront of this investigation and will leave no stone unturned as we seek the truth for the American people, including using every legal tool in our toolbox.”

Arkansas Sen. Tom Cotton, who was one of the first senators to raise the alarm about the possibility that the Wuhan Institute of Virology could have played a role in the release of COVID-19, said the documents were further proof that Fauci has lied to Congress about gain-of-function research.

“Tony Fauci has repeatedly lied to Congress and the American people about NIH funded gain-of-function research at the Wuhan Institute of Virology,” Cotton said. “Instead of playing word games, he should come clean about research at the lab, his involvement, and the Chinese Communist Party’s efforts to hide the truth about this research.”

The documents reported by the DCNF on Wednesday showing EcoHealth and Fauci’s subordinates discussing gain-of-function research in 2016 were first alluded to by House Energy and Commerce Committee Ranking Member Rep. Cathy McMorris Rodgers and other top Republican lawmakers in an Oct. 27 letter to NIH Director Francis Collins.

The lawmakers said in the letter the NIH allowed their committee staffers to review the communications during a private in-person inspection at the Department of Health and Human Services’ headquarters in early October but refused to release copies of the letters to the committee.

One of the signatories of the letter, Rep. Morgan Griffith of Virginia, railed against the NIH for shielding information about its activities in Wuhan from the public.

“NIH has been far too obstinate about shielding what it knows regarding COVID’s origins from the American people,” Griffith told the DCNF. “Revelations that NIH ignored warnings about EcoHealth’s research in Wuhan will only further erode public confidence in the agency, and rightfully so. The taxpayers who fund NIH deserve better. The agency must finally reveal what and when it knew about COVID’s origins.”

The NIH did not immediately return a request for comment.

‘Cheated On His Taxes’: Rick Scott Unveils Ad Urging Biden To Resign Ahead Of Florida Trip