Hunter Biden no longer holds any interest in his personal LLC or the Chinese private equity firm BHR Partners, his attorney told The New York Times on Saturday, but new records obtained by the Daily Caller News Foundation cast doubt on the claim.

Hunter Biden, through his company, Skaneateles LLC, obtained a 10% stake in BHR with a $420,000 investment in October 2017. White House press secretary Jen Psaki said as early as February that Hunter Biden was in the process of divesting his ownership stake in the firm, but Chinese business records continue to state as of Wednesday afternoon that Skaneateles remains a 10% owner of BHR

And while Chris Clark, a lawyer for Hunter Biden, told the New York Times that Hunter “no longer holds any interest, directly or indirectly, in either BHR or Skaneateles,” Washington D.C. business records for the LLC continue to list him as the only governor and beneficial owner for the company.

Hunter Biden was identified as the only governor for Skaneateles in the firm’s latest two-year report submitted to the Washington, D.C., Department of Consumer and Regulatory Affairs (DCRA) on Oct. 20, according to a copy of the filing obtained by the DCNF. The DCRA told the DCNF that the Oct. 20 filing, which incurred a $400 submission fee, was the most recent filing on hand for the company. 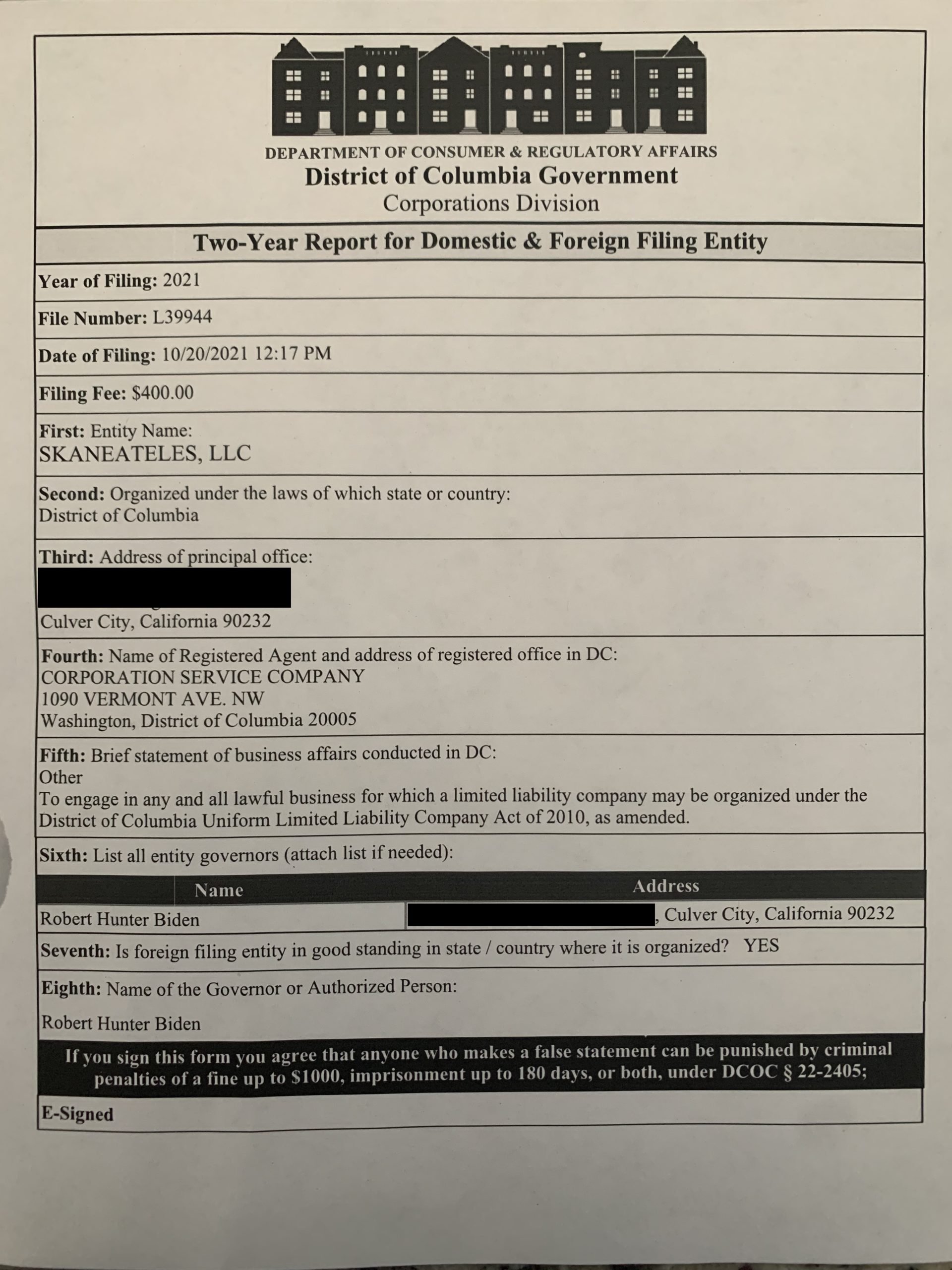 Skaneateles, LLC, two-year report filed with the DCRA on Oct. 20, 2021. The filing lists Hunter Biden as the entity’s only governor. (screenshot)

The DCRA’s public-facing online business registry continues to identify Hunter Biden as the only beneficial owner of Skaneateles as of Wednesday afternoon. However, the DCRA records also reflect that Skaneateles’ status is revoked, meaning that continued operation could result in fines unless the business is reinstated. 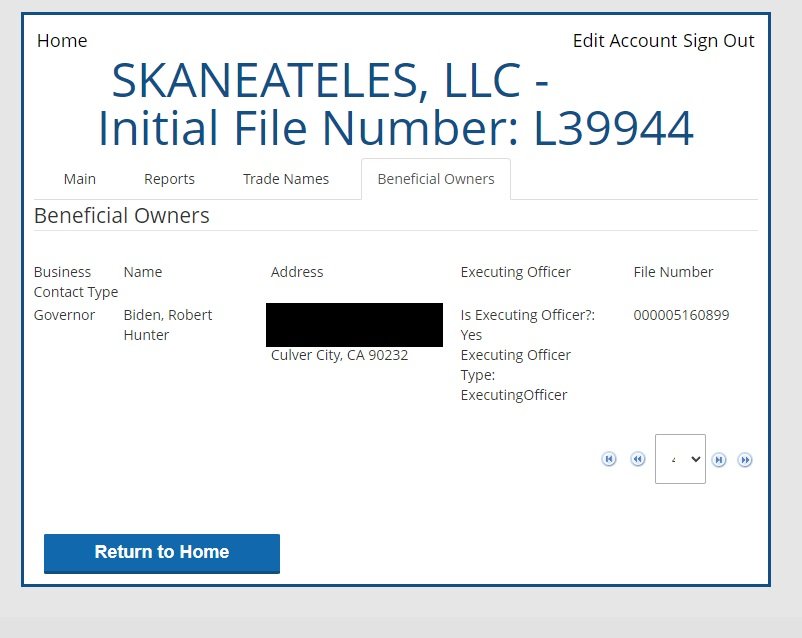 DCRA lists Hunter Biden as the only beneficial owner of Skaneateles, LLC, as of Wednesday afternoon. (screenshot)

President Joe Biden promised in no uncertain terms during and after his presidential campaign that no member of his family would have any business relationship with any foreign corporation.

“No one in my family will have an office in the White House, will sit in on meetings as if they are a cabinet member, will, in fact, have any business relationship with anyone that relates to a foreign corporation or a foreign country,” Joe Biden said in October 2019. “Period. Period. End of story.”

Hunter Biden was a founding member of BHR’s board of directors when the private equity firm launched in 2013. The firm is co-owned by the Chinese state-controlled Bank of China and manages the equivalent of $2.1 billion in assets, according to its website.

During Hunter Biden’s time on the BHR’s board, the private equity firm helped facilitate a Chinese mining company’s purchase of one of the world’s largest copper mines in 2016, the New York Times reported. In 2015, BHR also bought a $15.3 million stake in the Chinese electric vehicle battery manufacturer CATL, which it later sold for $30.1 million in 2018, the Financial Times reported.

Mesires, Hunter Biden’s lawyer, said in an October 2019 statement that his client had not received any return on his investment in BHR. But emails on Hunter Biden’s laptop previously reported by the DCNF show that his former business partner informed him in November 2018 that he should expect a “significant distribution” from BHR in 2019 due to its successful exit in CATL. 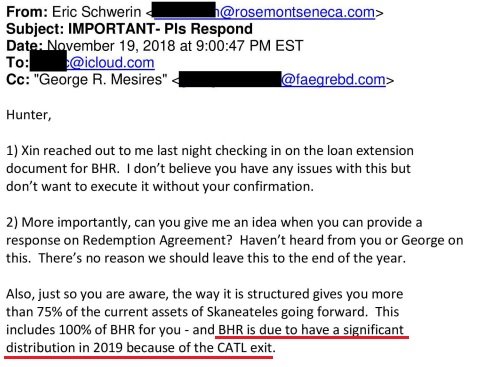 Hunter Biden’s former business partner, Eric Schwerin, also told Hunter Biden in a December 2018 email that BHR would generate income for him “over the next couple of  years.” 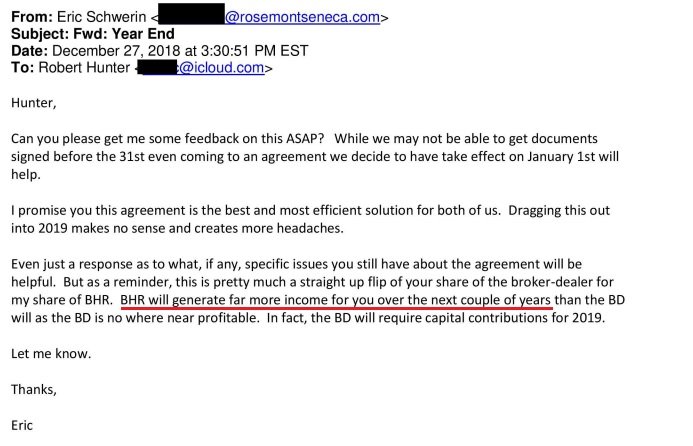 Ailan Evans contributed to this report.