The company founded by the son-in-law of Attorney General Merrick Garland uses concepts from critical race theory in materials used to train teachers and administrators across the country, according to an expert at the conservative Heritage Foundation.

Garland issued a memo on Oct. 4 instructing the Federal Bureau of Investigation to look into a “disturbing spike in harassment, intimidation, and threats of violence against school administrators, board members, teachers, and staff.” The memo drew criticism from many parents who have protested policies involving the use of critical race theory and the response to COVID-19. Garland issued the memo after the National School Boards Association asked the Biden Administration to intervene.

“There are no conflicts of interest,” Garland told the House Judiciary Committee during a contentious Oct. 21 hearing when he was questioned about the Oct. 4 memo and his ties to Panorama Ed, founded in 2012 by his son-in-law, Xan Tanner.

Among the training offerings from Panorama was “Social-Emotional Learning as a Vehicle for Equity,” a five-hour course with seven lessons, 40 videos, and nine practice activities. The course, which appears to have been removed Oct. 12, and another document called District Leader’s Guide to SEL and Equity, are “suffused with CRT,” Michael Gonzalez, a fellow at the Heritage Foundation, told the Daily Caller News Foundation.

“Critical race theory is a toxic ideology that looks at the world and personal identity through the lens of race, oppression and ‘privilege,’” Asra Q. Nomani, the vice president of investigations for Parents Defending Education told the Daily Caller News Foundation.

When asked about the deletion of the course, a spokeswoman for Panorama told the DCNF that it was “a marketing webinar that is no longer available on our website. The concern was with a link that was shared within it; it was not Panorama’s content.”

“I went to the page about ‘Transformative SEL’ on Panorama’s website just before noon on October 14th, took screenshots, and posted them to Twitter. Three hours later I got a message from a follower that the link was working but the transformative SEL content was gone. I checked myself and it was, in fact, gone,” Sanzi told the DCNF. 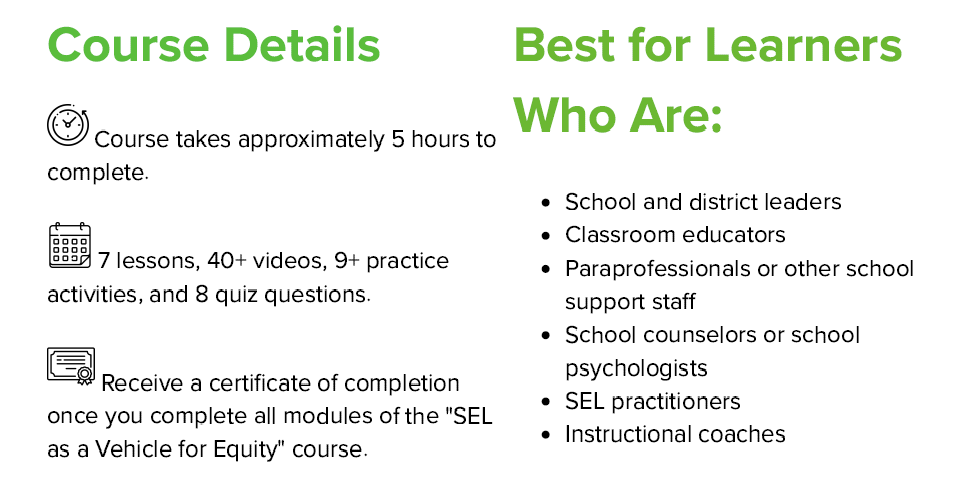 Screenshot from a PDF of the course summary for “Social Emotional Learning As A Vehicle for Equity” downloaded by the DCNF.

An overview of the course obtained by the DCNF noted it was labeled as a “certificate course.” To obtain the certificate, “all lessons and videos must be completed with a quiz score of 70% or higher.”

When asked about the deletion of the course, the spokeswoman said, “You’re correct that this is referencing a course. We also have a marketing webinar with a similar title. Both the webinar and the course are no longer available.”

On its website, Panorama claims to reach 13 million students across all 50 states. The company states that 21,000 schools across 1,500 school districts use its material. The company signed a five-year contract worth almost $1.8 million with Fairfax County Public Schools on June 8.

Critical race theory holds that America is fundamentally racist, yet teaches people to view every social interaction and person in terms of race, and whose adherents pursue “antiracism” through the end of merit, objective truth and the adoption of race-based policies.

“When we talk about equity in this course, we are talking more specifically about racial equity, though we will also think about intersectionality of identities,” Panorama states in a section called “Mindset for this Course,” according to a transcript of the course obtained by the DCNF.

Screenshot from a PDF of the course summary for “Social Emotional Learning As A Vehicle for Equity” downloaded by the DCNF.

The course uses a definition of “educational equity” from Elena Aguilar, the founder and president of Bright Morning, which describes itself as a company whose “work transforms schools into equitable places of learning.”

Aguilar labeled President’s Day as a “hallmark of institutionalized white supremacy” in a Feb. 15 Instagram post and described attacks on critical race theory as making her “sad” in an Aug. 13 post.

In one section early in “Social-Emotional Learning as a Vehicle for Equity,” Panorama invites those taking the course to do a “land acknowledgement,” which is used to address historical wrongs done to Native Americans. The course also states as an objective that those taking it would have “reflected on your own social identity and privileges and how those show up in your education practice.”

Discussions of “systemic racism” also took place in a number of blog posts on the organization’s web page. In one post, “A More Equitable Future: Combating Unconscious Bias and Systemic Racism in Schools,” Becky Barstein wrote, “As we work to disentangle the systemic racism and implicit bias impacting our own lives and our school communities, know that Panorama is here to support you. Know that we are walking shoulder-to-shoulder with you. Together, we will invest in the difficult work of dismantling the systems of oppression in our world.”

In another post, titled, “Fix Systems, Not Students: 5 Key Insights for Engaging in Equity Work,” Nick Woolf wrote that 6,400 educators took part in a virtual summit in February. “We are all walking shoulder-to-shoulder as we work to dismantle the systems of oppression that impact our own lives, our school communities, and our world,” Woolf wrote.

Screenshot from a blog post by Panorama’s Larry Woolf

The post also stated that readers would learn “about common pitfalls encountered when engaging in equity work” and “how to adopt an anti-racist framing.”

When asked if critical race theory was present in materials used by Panorama, a spokeswoman for Panorama referred the DCNF to a frequently asked questions (FAQ) page on the company’s web site.

In a guide on the identification of critical race theory, the Heritage Foundation think tank noted some of the characteristics that identify the approach, including some terms used in Woolf’s blog post.

“CRT’s key assertion is that racism is not the result of individual, conscious racist actions or thoughts. Racism is ‘systemic’ and ‘structural.’ It is embedded in America’s legal system, institutions, and free enterprise system, and imposes ‘whiteness’ as the societal norm,” the Heritage Foundation said in a web page titled “How to Identify Critical Race Theory.”

“Panorama Education’s business model is predatory and disturbing because it exploits and data mines innocent children with the fake concern for ‘social emotional learning.’ Social emotional learning can be a valuable tool for uplifting children and school communities,” Nomani told the Daily Caller News Foundation. “In the wrong hands, it’s now a weapon that is corrosive to both the brain health of children and the well-being of school communities.”