The Biden administration proposed a rule that would protect Deferred Action for Childhood Arrivals applicants from deportation, CBS News reported on Monday.

The proposition will be open to public comments for 60 days after its expected publication on Tuesday, according to CBS News. Around 590,000 undocumented immigrant “dreamers” who were brought to the U.S. as children have work permits and deportation protection because of the rule.

“The Biden-Harris Administration continues to take action to protect Dreamers and recognize their contributions to this country,” Department of Homeland Security Secretary Alejandro Mayorkas said in a statement. “This notice of proposed rulemaking is an important step to achieve that goal.”

The Biden administration’s proposed rule is based on DACA guidelines established in 2012 after former President Barack Obama created the program, according to CBS News. Former President Donald Trump tried to end the program in 2017.

DACA applicants must have arrived in the U.S. before they turned 16, lived in the U.S. since at least 2007 and not been convicted of serious criminal convictions, CBS News reported. Applicants must also have or pursue an American high school diploma, a GED or honorable U.S. military service.

A Texas federal judge ruled the program was created unlawfully in July, preventing tens of thousands of teenage and young adult immigrants from applying, according to CBS News. Democratic lawmakers tried to create a legal pathway for “dreamers” through the budget reconciliation process, though the Senate parliamentarian blocked the move.

Biden’s tax proposals, in the $3.5 trillion reconciliation bill, will stagnate the economy 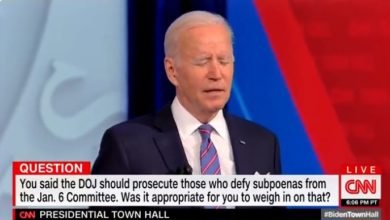 Knucklehead Of The Week: Joe Biden And His Town Hall Debacle On CNN