Border officials encountered an estimated 210,000 migrants at the southern border in July, the highest monthly total since 2000, the Associated Press reported Tuesday.

The numbers of encounters historically decrease during the hot summer months, though officials have yet to report a monthly decrease since April 2020, according to Customs and Border Protection (CBP) data. The total number of encounters at the southern border may be exaggerated because most migrants were rapidly expelled under a Trump-era public health order and some attempted to cross the border multiple times, according to CBP.

“The large number of expulsions during the pandemic has contributed to a larger-than-usual number of migrants making multiple border crossing attempts, which means that total encounters somewhat overstate the number of unique individuals arriving at the border,” CBP said in a statement.

Border officials also reportedly encountered around 80,000 migrants traveling as family units, up from around 55,800 in June and just below the all-time recorded high of 88,800 in May 2019, Shahoulian said, according to the AP.

-Border agents encountered avg of 6,779 migrants daily first 29 days of July
-On Aug 1, @CBP was at 389% of covid-adjusted capacity, with RGV sector 783% over pic.twitter.com/F5FFBiqShf

Texas’ Rio Grande Valley and Del Rio sectors accounted for over 70% of family unit encounters, according to the AP.

The Rio Grande Valley is the “epicenter of the current surge” where agents encountered more than 78,000 migrants in July, up from 59,000 in June and around 51,000 in May, Shahoulian said, the AP reported.

The preliminary numbers were released as part of a court filing involving a lawsuit over federal official’s use of Title 42 to expel most migrants, including family units, back to Mexico, according to the AP. Title 42 was implemented in response to the COVID-19 pandemic and more than 750,000 migrants have been expelled under the order, according to CBP.

“Title 42 is not an immigration authority, but a public health authority, and its continued use is dictated by CDC and governed by the CDC’s analysis of public health factors,” the Centers for Disease Control and Prevention said in a statement Monday. 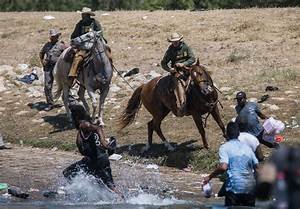 Ban the Horses is Just a Distraction