Leftists these days seem to care about two things. On one day they claim that white supremacy is the greatest threat that our country faces, but on the next they claim that the world is going to end in a few years because of climate change. Specifically, leftists say that if carbon emissions do not stop immediately, the world will heat by about 2 degrees, which will cause the apocalypse. Even though carbon emissions are probably not going to cause the apocalypse, deal with the pollution, eventually. There are a few reasons for this, minor warming could shorten growing seasons increasing the price of food, excessive air pollution is bad for lung health, and sea levels may rise and cause property damage, and rising acidity in the oceans may hurt the fishing industry.

Both sides can agree that carbon emissions are a problem, but the difference is how the sides want to deal with it. Leftists want to shut down the entire economy with their Green New Deal and ban fossil fuels. They propose many supposed solutions for carbon emissions, but none of them are actually workable. There are a few factors to consider when determining the worth of a particular energy source, what is its energy density, is it safe, and is it reliable.

One of the primary energy sources that leftists propose is wind, but there are several problems with wind fuel. The first problem is that wind is not reliable, if it is not windy there would be no power. While it is possible to store some energy in batteries, our battery capacity is not at a level that would allow for consistent power. Wind has a relatively low energy density, so huge tracts of land would have to be covered with windmills. This causes the last problem with wind energy.

Windmills are horrible for the environment. They kill many bugs and birds. Some have made the argument that house cats kill more birds, but I haven’t ever seen a cat kill a hawk. These windmills don’t just kill songbirds, they kill birds of prey, and that has many ecological consequences. If the birds die that means that the things the birds eat do not, and eventually, this will put a strain on the ecosystem because many species will be overpopulated.

The most popular energy source among leftists would be solar. Solar energy certainly has some advantages, but there are a few often-overlooked factors that make solar energy a non-optimal choice for a power source. Just like wind, solar falls short for reliability, if the sun is not shining energy will not be produced. In some climates, this might be possible to deal with, but even then you still have the problem of night. Luckily, power consumption goes down in the nighttime, so it is in theory possible to store enough energy. Even if it is possible, it does not mean that it would be easy. Solar panels are expensive and can take a long time to install.

Leftists have proposed a few other energy sources, such as geothermal or hydroelectric, but mostly these energy sources suffer from similar downfalls. There is, however, one solution that might actually work that does not entail forcing the entire economy to shut down, but leftists are terrified of it. Nuclear energy is the perfect power source, and it could single-handedly solve the power issue. The main concern people have for nuclear is safety, but nuclear causes less than 0.3% the amount of deaths that coal does. In fact, it has been proven that nuclear energy is one of the safest forms of energy. 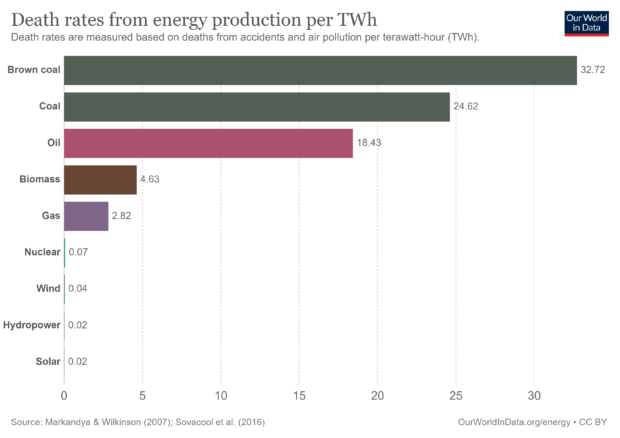 Not only is nuclear energy safe, it is also the most efficient and reliable form of energy. Leftists often talk about reaching 0 carbon emission, and that is exactly what nuclear energy does. The only thing a nuclear plant releases into the air is water vapor. The real reason leftists refuse to support environmentalism is that they want to use it as a political tool. Leftists hate freedom, and would love nothing more than to shut down the entire economy with their Green New Deal. Nuclear is a simple solution, but until policy change makes it easier to build nuclear plants, leftists will continue trying to use carbon emissions to gain power.

I am Nicholas Van Landschoot, and I am a conservative author. My qualifications include having a grasp on reality, a basic understanding of English, and that is about it. I tend to write about cultural and political issues such as abortion, the willful mutilation of oneself, and other things like that. Some people think inspiration is important for writing, but I write from a place of deep horror and disgust.