On Jan. 11, China Mobile, China Telecom and China Unicom will be removed from the New York Stock Exchange, CNN reported. The telecom companies are all major state-owned firms that the U.S. suspects are tied to the Chinese military.

“We firmly support the three companies to safeguard their legitimate rights according to law, and believe they are able to properly handle any negative impact caused by the executive order and potential delisting,” the China Securities Regulatory Commission said in a statement Sunday, according to CNN.

The Chinese commerce ministry said Saturday that it would take “necessary measures” to defend the interests of Chinese companies, according to CNN.

President Donald Trump signed an executive order on Nov. 12 prohibiting Americans from investing in select Chinese firms that support China’s military, intelligence and security apparatus. The Department of Defense on Dec. 3 released a list of companies that Trump’s order would apply to, which included the three telecom companies.

“The People’s Republic of China is increasingly exploiting United States capital to resource and to enable the development and modernization of its military, intelligence, and other security apparatuses,” Trump said in the order.

“This move will not only seriously damage the legitimate interests of Chinese companies, but will also damage the interests of investors in various countries, including the United States,” said Chinese foreign ministry spokesperson Wang Wenbin, according to UPI.

The executive order is unlikely to harm or significantly impact the companies, which have plenty of cash flow and aren’t in need of American investment, The Wall Street Journal reported.

“This is not a problem for the Chinese telecom companies,” Peter Milliken, head of Asia-Pacific telecom research at Deutsche Bank, told the WSJ. “It is a problem for the U.S. investors that have to sell, locking in their investments at a historically low price.” 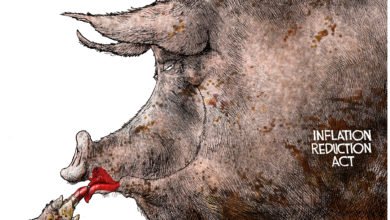