Colin Kahl, who President-elect Joe Biden announced Wednesday will serve in a top Pentagon position, pushed the now-debunked conspiracy theory that the Trump campaign conspired with the Kremlin to influence the 2016 election.

Kahl endorsed the collusion theory in a December 2017 essay for Foreign Policy and also boosted the now-debunked Steele dossier in posts on Twitter.

“The circumstantial evidence suggesting that the Trump campaign collaborated with the Kremlin to get now-President Donald Trump elected continues to mount,” Kahl, who was a national security adviser for Biden when he served as vice president, wrote in the Foreign Policy essay.

“But even if it turns out that there was no direct ‘collusion’ to shape the 2016 election, what we have learned so far — including most recently from retired Lt. Gen. Michael Flynn’s guilty plea this past week — is incredibly troubling.”

Kahl, who has served as national security adviser to Biden when he was vice president, held open the possibility that the Trump team did not directly collude with Russia, but he asserted that “the evidence is now irrefutable” that Trump, his associates and top Republicans “broadly conspired to give Moscow a pass despite (or perhaps because of) Russia’s attack on our democracy.”

The Biden transition team announced on Wednesday that Kahl will serve as undersecretary of defense for policy. He is among several Biden appointees who promoted theories of suspicious links between Trump associates and the Russian government.

Jake Sullivan, who will serve as Biden’s national security adviser, pushed the conspiracy theories as a top Clinton campaign adviser in 2016. In 2018, Sullivan defended the Clinton campaign’s funding for the dossier as “perfectly appropriate.”

Kahl also endorsed to the controversial Steele dossier, which alleged that Trump campaign associates conspired with Kremlin insiders and Russian hackers to release emails damaging to Democrats in the 2016 cycle.

He wrote in a tweet on March 26, 2017, that information gathered by Seth Abramson, a well-known Trump-Russia conspiracy theorist popular on Twitter, “seems worth closer look.” 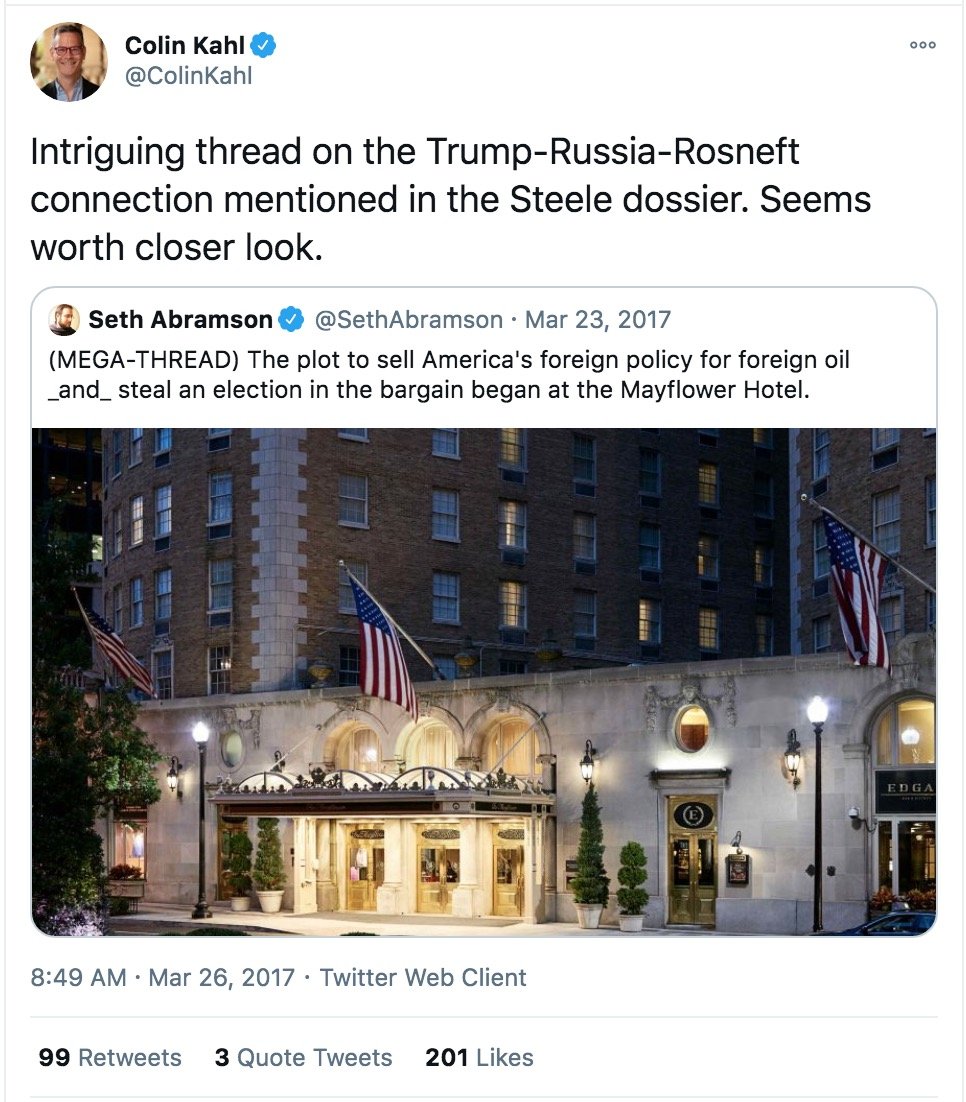 Kahl also promoted an essay from former CIA official John Sipher, who asserted that the allegations in the dossier were “generally credible.”

Sipher’s essay has not held up in light of more recent information about the dossier, which was written by former British spy Christopher Steele on behalf of the DNC and Clinton campaign.

Steele alleged that Michael Cohen, a former lawyer for Donald Trump, visited Prague in August 2016 to meet with Kremlin operatives in order to discuss paying off hackers. A report from the special counsel’s office said that Cohen never visited Prague.

The Biden transition team did not respond to a request for comment.

Support Conservative Daily News with a small donation via Paypal or credit card that will go towards supporting the news and commentary you've come to appreciate.
Tags
2020 Election News Biden Administration Colin Kahl