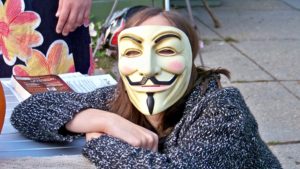 After insisting vociferously for decades that “there is no voter fraud” the Democrats are now flooding the internet with talking points for their duped, true-believers: Ignore the avalanche of reports that are coming out about voter fraud.  It doesn’t matter anyway.

Someone went to a lot of trouble to put this piece together: The 2020 Election wasn’t ‘stolen.’  Here are all the facts to prove it.’  It’s clearly meant to get ahead of the coming onslaught and temper the blow when Sidney Powell and the crack Trump team of lawyers “release the Kracken.”

Read the whole thing if you like, but the upshot is, “Yeah, there-was-cheating-and-it all-just-happened-to benefit-only-Biden-and-never-Trump-but-it-doesn’t-matter-anyway-because-it-won’t-be-enough-to-swing-the-election.

Look for every leftist news outlet (read: all of them) to feature talking heads repeating the same talking points ad nauseum and then add: “…and Trump is irresponsible and evil for not conceding now.”

Anyone on a jury would be well-advised to throw out all testimony by a witness who confesses to lying when backed into a corner, but then quickly adds, “But you can believe me now.”

For the rowdies who are always at the ready to riot, facts don’t matter anyway but it continues to amaze me when seemingly smart people keep listening to the same people who are caught in lie after lie while demonizing their opposition and who never stop irresponsibly whipping the most unhinged of our citizens into a constant frenzy.

The reason psychology figures into all of this so prominently, is that Democrats are still counting on the human need to be seen in a good light. So much so, that we resist more than the plague, admitting that we were duped. See how I universalized that to soften the blow?

Thankfully, it’s becoming clear that there were also many more people than we realized who didn’t buy the Leftist lies and propaganda. Some will be tempted to make it easier on those who did by comments like that last one.  It’s probably wise, so the person doesn’t bounce back into the same old pattern.

The ramifications of admitting that this bunch wasn’t just wrong, but was intentionally deceitful will be just be too much for some egos to bare.

We can take comfort in knowing that those who jump on bandwagons easily, jump off in a hurry too. Sadly, we live in a world manipulated by social pressure more than by facts.

Admitting you were duped could mean that Donald Trump was never the devil incarnate, an evil racist, Hitler, a dictator, a con-man and oh yes, his ties are too long.

It would mean that the violence, the bigotry and the hatred that has been directed at Trump and his supporters for the last 4 years has been instigated by the true guilty parties.  It would mean… that sometimes politics is not a moral equivalent and that the truth is rarely,  “somewhere in the middle.” 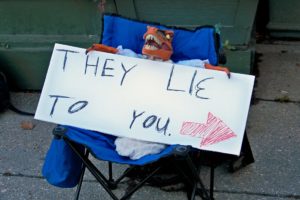 What this gullible bunch may have the hardest time admitting is that there really is an objective right and wrong and no amount of “protest” rioting, looting, stealing and felonious assault will change that.

Hats off to the legions of whistle-blowers who are continuing to sign affadavits as to their first-hand witnessing of voter fraud. If they can stand up for the truth for the good of the country, then those who chose intellectual laziness and blind acceptance of the propaganda media can muster up the courage too.

It shouldn’t be so hard for them to finally start asking that very first question that gets people out of cults. Let us hope that, “Yeah we cheated, but it won’t be enough to change outcome” will finally be enough to get them to ask that first question.