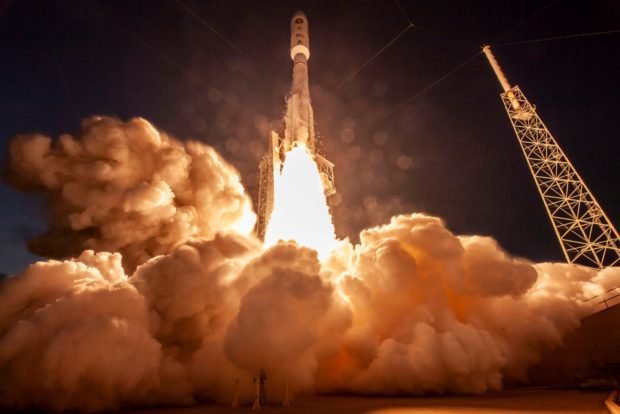 The NROL-101 mission was the first ULA launch flying the new Northrop Grumman Graphite Epoxy Motors (GEM) 63 solid rocket boosters that burn solid propellant and augment the lifting capacity of the rocket’s first stage. The GEM 63s measure 63 in. (1.6 meters) in diameter and 66 ft. (20.11 meters) in length. Each GEM 63 produced 371,550 pounds (1.6 mega-Newtons) of max thrust to augment the 860,200 pounds (3.83 mega-Newtons) of thrust produced by the RD-180 main engine to power the Atlas V rocket skyward. At liftoff, the combined thrust was nearly 1.8 million pounds or 8 million mega-Newtons.

The mission launched on an Atlas V 531 that included a 17 ft. (5 meter) payload fairing. The Atlas booster for this mission was powered by the RD AMROSS RD-180 engine. Aerojet Rocketdyne provided the RL10C-1 engine for the Centaur upper stage.

This was the 86th launch of the Atlas V rocket and the 71st Atlas V to launch from Space Launch Complex-41 in Florida.

ULA’s next launch is the NROL-44 mission for the NRO from Cape Canaveral Air Force Station.

To date ULA has launched 141 times with 100 percent mission success.

With more than a century of combined heritage, ULA is the nation’s most experienced and reliable launch service provider. ULA has successfully delivered 140 missions to orbit that aid meteorologists in tracking severe weather, unlock the mysteries of our solar system, provide critical capabilities for troops in the field, deliver cutting-edge commercial services and enable GPS navigation.

Support Conservative Daily News with a small donation via Paypal or credit card that will go towards supporting the news and commentary you've come to appreciate.
Tags
Atlas V Rockets United Launch Alliance

CCP-Linked TikTok To Crack Down On Election ‘Misinformation’, Partners With US Gov