An A-10 pilot said he was surprised when he discovered he would be receiving the Distinguished Flying Cross Award.

Maj. Brett DeVries of the Michigan Air National Guard’s 107th Fighter Squadron received the Flying Cross on Nov.6 for conducting a safe emergency landing of an A-10 Thunderbolt, according to an Air Force press release. The landing was believed to be a first in the aircraft’s history where both the landing gear and canopy weren’t functioning, according to a 2017 Air Force news release. 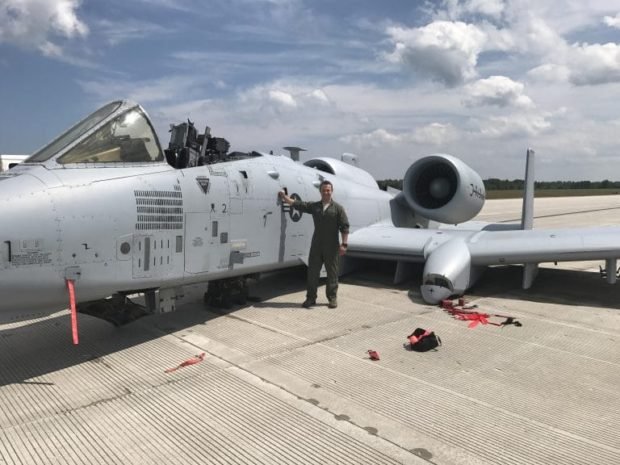 “You know, honestly, I was surprised I guess, because I wasn’t aware that it was all going on. My commanders were kind of working on it behind the scenes, unbeknownst to me,” DeVries told the DCNF in an interview.

DeVries told the DCNF that he heard the award was reserved for combat and not “in any peacetime setting.” The pilot said he learned around Oct.8 that he would be receiving the award.
“I was on the road with my airline job, when my current commander called to inform me about the award and that and just how the secretary in the air force was going to be coming out to our squadron to present it, which is a pretty unique opportunity and good exposure for us as a unit. So it was all, all very positive,” DeVries told the DCNF.
|DeVries landed the A-10 at the Alpena Combat Readiness Training Center in July 2017 after an aircraft gun malfunction damaged the thunderbolt and the canopy, according to the news release. The incident occurred during a training flight. “The Distinguished Flying Cross is America’s oldest military aviation decoration,” Secretary of the Air Force Barbara M. Barrett said, according to the press release.
“Awarded for heroism or extraordinary achievement that is, ‘entirely distinctive, involving operations that are not routine,’ today, Maj. DeVries, you will join the ranks of some other American heroes,” Barrett said, according to the press release.