Catholic bishops pushed back against remarks in which Pope Francis appeared to condone same-sex civil unions, warning that the statements as reported spread “turmoil, confusion, and error.”

Media reported Wednesday that the pope had made bombshell statements condoning civil unions that were included in the documentary “Francesco,” which premiered Wednesday night in Rome. The documentary was directed by the gay, Russian born director Evgeny Afineevsky.

Following the release of the documentary, media outlets reported that Pope Francis condoned same-sex civil unions, quoting the Holy Father as saying: “Homosexuals have a right to be a part of the family. They’re children of God and have a right to a family. Nobody should be thrown out, or be made miserable because of it,” and, “What we have to create is a civil union law. That way they are legally covered. I stood up for that.”

The statements on homosexuality and civil unions were taken from a 2019 interview with Mexican journalist Valentina Alazraki, the Catholic News Agency reported — and the publication added the comments were heavily edited for the documentary.

Director Afineevsky insisted that Pope Francis made the comments directly to him through a translator, according to the Associated Press, but Afineevsky would not tell the AP when Francis made the divisive remarks. The Vatican has not commented on the remarks, and has not responded to requests for comment from the Daily Caller News Foundation.

CNA bolded the parts of Francis’s comments that were reportedly excerpted for the documentary:

“Another thing is, I said when you see some signs in the children and from there send them to –  I should have said a ‘professional,’ what came out was ‘psychiatrist.’ I meant to say a professional because sometimes there are signs in adolescence or pre-adolescence that they don’t know if they are homosexually oriented or if it is that the thymus gland didn’t atrophy in time. Who knows, a thousand things, no? So, a professional. The title of the daily paper: ‘The Pope sends homosexuals to the psychiatrist.’ It’s not true!”

“They asked me the same question another time and I repeated it, ‘They are children of God, they have a right to a family, and such.’ Another thing is – and I explained I was wrong with that word, but I meant to say this: When you notice something strange – ‘Ah, it’s strange.’ – No, it’s not strange. Something that is outside of the usual. That is, not to take a little word to annul the context. There, what I said is that they ‘have a right to a family.’ And that doesn’t mean to approve of homosexual acts, not at all.”

The reportedly edited comments in the documentary sparked a backlash in media and the Catholic Church, which teaches that homosexual acts are “contrary to the natural law,” and should “under no circumstances” be approved.

Pope Francis himself previously wrote in his 2016 encyclical Amoris Laetitia that “There are absolutely no grounds for considering homosexual unions to be in any way similar or even remotely analogous to God’s plan for marriage and family.”

“The Pope’s statement clearly contradicts what has been the long-standing teaching of the Church about same-sex unions,” Tobin said in a statement. “The Church cannot support the acceptance of objectively immoral relationships.”

“Individuals with same-sex attraction are beloved children of God and must have their personal human rights and civil rights recognized and protected by law,” Tobin continued. “However, the legalization of their civil unions, which seek to simulate holy matrimony, is not admissible.”

From Rome, Cardinal Raymond Leo Burke issued a Thursday statement warning that Pope Francis’s declarations “generate great bewilderment and cause confusion and error among Catholic faithful, inasmuch as they are contrary to the teaching of Sacred Scripture and Sacred Tradition, and of the recent Magisterium by which the Church guards, protects and interprets the whole deposit of faith contained in Sacred Scripture and Sacred Tradition”

“Equally sad and concerning is the turmoil, confusion, and error they cause among the Catholic faithful, as is the scandal they cause, in general, by giving the totally false impression that the Catholic Church has had a change of course, that is, has changed its perennial teaching regarding such fundamental and critical questions,” he said.

Archbishop Carlo Maria Vigano, the Holy See’s former ambassador to Washington and an outspoken critic of Pope Francis, said Wednesday that the statements, as reported by the media, are “totally heterodox and constitute a very serious cause of scandal for the faithful.”

From the Congregation for the Doctrine of the Faith June 3, 2003…..Considerations Regarding Proposals To Give Legal Recognition To Unions Between Homosexual Persons https://t.co/7u16iPpu8G

Progressive Catholic clergy defended the pope and insisted that his words were misinterpreted, though others like Jesuit priest James Martin praised the step as a “major step forward in the church’s support for LGBTQ people.”

Breaking: This is a major step forward in the church’s support for LGBTQ people.

Pope Francis: “What we have to create is a civil union law,” he said. “That way they are legally covered. I stood up for that.”https://t.co/wscr7u3HRZ

“Pope Francis strongly and consistently teaches that marriage is between a man and woman for a lifetime and that this is God’s plan for having and raising children,” Cardinal Sean O’Malley said in a Thursday statement.

“The Pope’s endorsement of civil unions is not an endorsement of homosexual activity,” O’Malley continued. “Just as the Church does not campaign against civil laws that allow for common-law marriage or second marriages that are not sacramental, even though such arrangements can be in violation of the laws of the Church, the Holy Father recognizes that in civil society there can be cogent reasons to enact such laws providing for civil unions which are not the same as the institution of marriage.”

‘No Future’ Without The Family 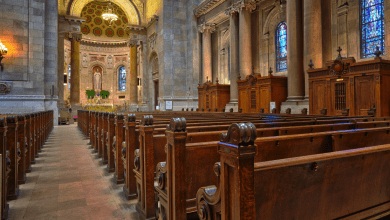 American Church Leadership is Selling their Soul for Socialism