Leaders of Greenpeace, an environmental advocacy organization, said President Donald Trump may steal the Nov. 3 election and the group has decided to prepare its members for a series of demonstrations in the coming week.

Four ranking activists associated with the non-profit gave in-depth tips during the presentation titled “Preparing for Protests in Mass Mobilization” on how to protest, what to bring and which procedures to adhere to in the case of arrest. Members said the group plans to participate in a mass movement called “Protect The Results,” which vows to mobilize if Trump “refuses to accept the results” of the upcoming election.

“We are facing the outright stealing of an election,” Greenpeace Executive Director Annie Leonard told the roughly 150 people in attendance. “Now it may not happen, but while we do everything we can to prevent it, we also need to prepare for safe, peaceful, non-violent resistance if needed. That’s what activists do when our democracy is under threat.”

“We have to organize to protect the results,” she continued. “If the election outcome is undetermined or unclear either by failure to count all of the votes or by Trump refusing to recognize the results, we need to be ready to peacefully mobilize immediately in our communities.”

Leonard also said Trump is experiencing “growing desperation” and the president doesn’t want them to vote.

“We’re on a path to win and by the looks of his growing desperation, Trump knows that too,” she said. “He knows he’s losing and we can expect him to fight.”

“Trump does not want us to vote because he’s trying to undermine the people’s will,” she continued. “He’s hoping that by sowing chaos and stoking fear, he can stop us from voting and then discredit the results.”

The group gave no indication of what they would do if Trump was the legitimate victor come Nov. 3, and the organization did not immediately return a request for comment on this matter at the time of publishing.

Indigenous Peoples Power Project member Harmony Lambert gave the attendees tips on what to expect during an arrest, but repeated that the protest is legally permitted and will be peaceful in nature.

“You should have your medication and who should be called in case you are arrested, Lambert said. “Do you have kids or pets or plants or anything like that need to be taken care of? Again, these are totally legal protests that Protect The Results in planning — we’re not expecting arrests, but it’s best to be prepared.”

“Another thing to consider is your legal or immigration status, what’s your record like, do you have any outstanding charges, possible warrants, any unresolved cases out there, you should have the contact information for jail support.” 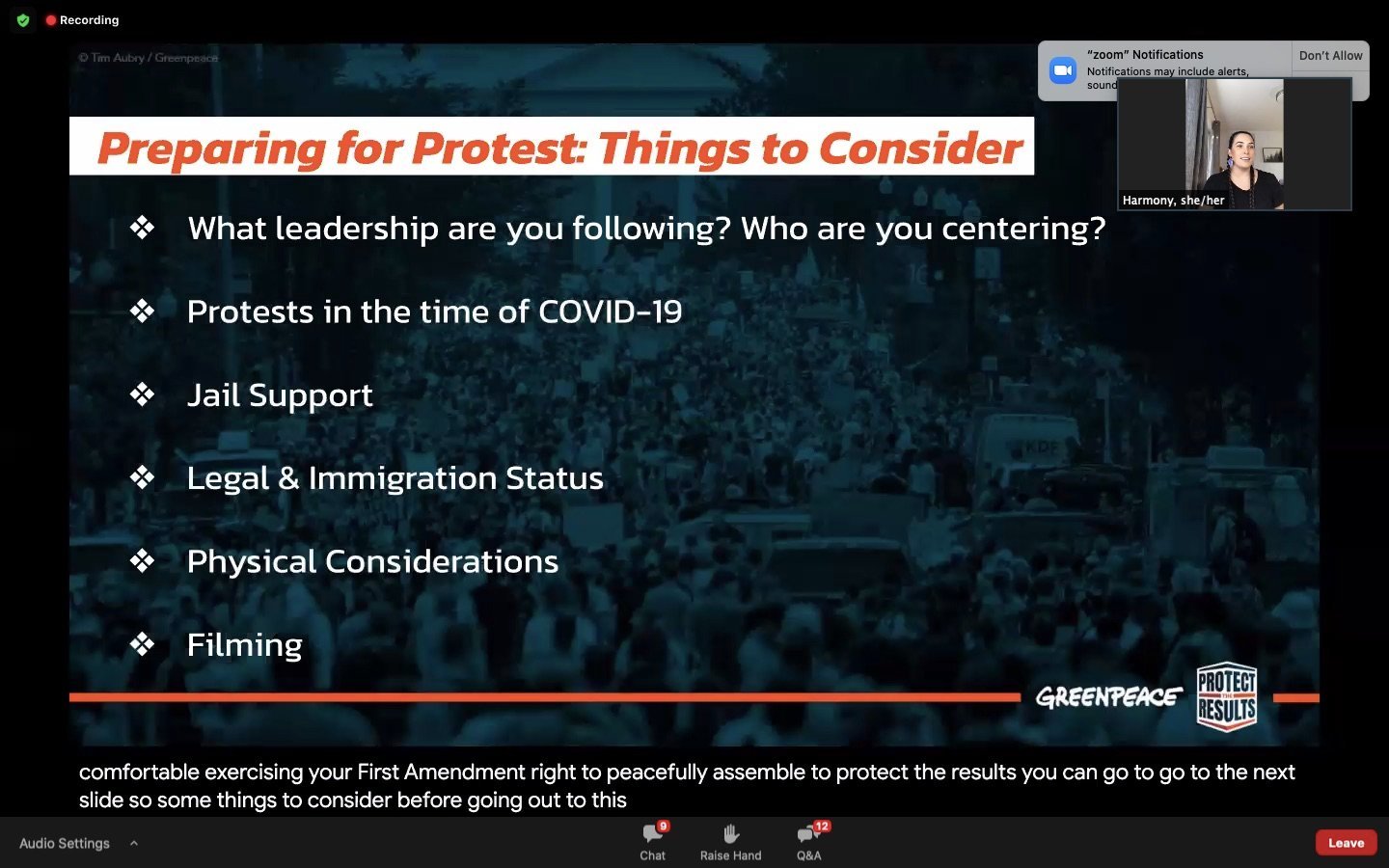 Lambert claimed that law enforcement will “escalate” a scenario “with or without cause” to “deploy tear gas, pepper spray” or other crowd control munitions. She also insisted that protesters should not “expect to receive any warnings to disperse.”

Lambert encouraged illegal aliens to locate information about their Immigration and Customs Enforcement (ICE) detention centers if they choose to march with the group.

The Indigenous Peoples Power Project member also gave a variety of tips on exactly how members should protest.

“Also be mindful of how much space you’re taking up, if your Protect The Results protest is specifically centering black and indigenous people of color and their voices, maybe if you’re white, you’re not the one that should have the bull horn or like lead the chants or anything,” she said.

Lambert instructed the attendees to be mindful of their “triggers” as well.

“It’s a really good idea to kind of think about your triggers, what are the things that kind of set you off or like push you immediately into the red.”

Other speakers instructed attendees to bring snacks, water, and make an exit plan. The organization is set to hold “de-escalation training,” a course on poster making and a more specific information seminar on how to deal with an arrest.

“Trump’s losing like so bad right now and we really just have to put the nail in the coffin,” Lambert said in her concluding remarks.