Twitter on Wednesday afternoon began blocking tweets from being posted that contained links to the New York Post’s report on alleged emails that purportedly show Hunter Biden offered to introduce then-Vice President Joe Biden to an executive of the Ukrainian gas company Burisma.

“We can’t complete this request because this link has been identified by Twitter or our partners as being potentially harmful,” Twitter told users who attempted to post a tweet containing a link to the Post’s story.

A Twitter spokesperson told the Daily Caller News Foundation that the platform took action to limit the spread of the Post’s report because of the lack of authoritative reporting on the origins of the materials cited by the outlet.

“In line with our Hacked Materials Policy, as well as our approach to blocking URLs, we are taking action to block any links to or images of the material in question on Twitter,” the spokesperson said.

There’s no evidence at the moment the Post relied on hacked materials for its report.

According to the Post, the email was part of a “massive trove of data recovered from a laptop computer” that was dropped off at a Delaware computer repair shop in April 2019. The owner of the repair shop said the customer never came back to pay for the service and retrieve the computer, the Post reported.

The Post uploaded an invoice signed by the customer that states that equipment left with the repair shop “after 90 days of notification of completed service will be treated as abandoned.”

The repair shop owner later alerted the FBI to the existence of the laptop and its hard drive after it went unclaimed, both of which were seized by federal authorities in December, according to a federal subpoena obtained by the Post.

Before the laptop was seized, however, the shop owner reportedly made a copy of its hard drive and turned it over to a lawyer for former New York Mayor Rudy Giuliani, who in turn provided a copy of the hard drive’s contents to the Post.

The DCNF has not confirmed the authenticity of the emails reported by the Post, and the Biden campaign issued a statement on Wednesday denying that Biden met with the Burisma executive in 2015 as alleged in the Post’s report. 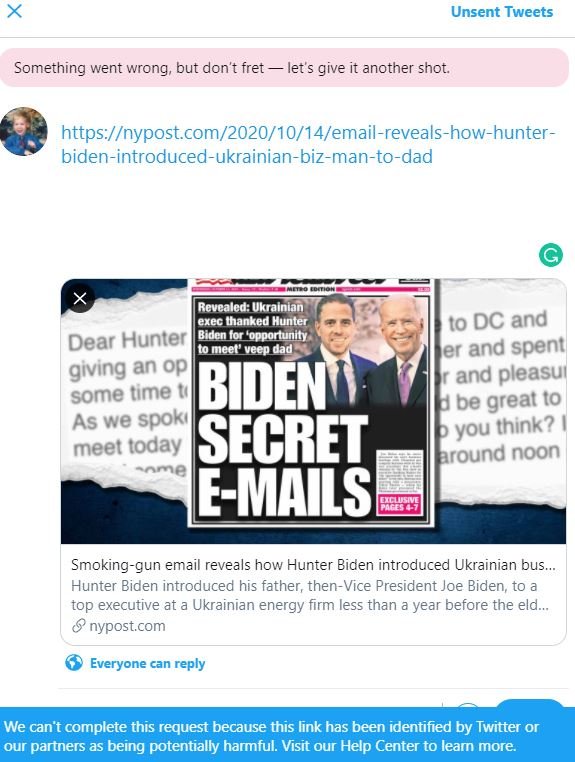 Tweets that contain links to the Post’s story with an AMP tag were not being blocked by Twitter as of the time of publication. AMP is a website format utilized by many news organizations that enables faster loading times for mobile users.

Twitter did not respond when asked why it did not block the AMP version of the Post’s report.

Also on Wednesday afternoon, Twitter began blocking any tweet from being posted that contained links to one of the two documents the Post uploaded to document sharing platform Scribd. 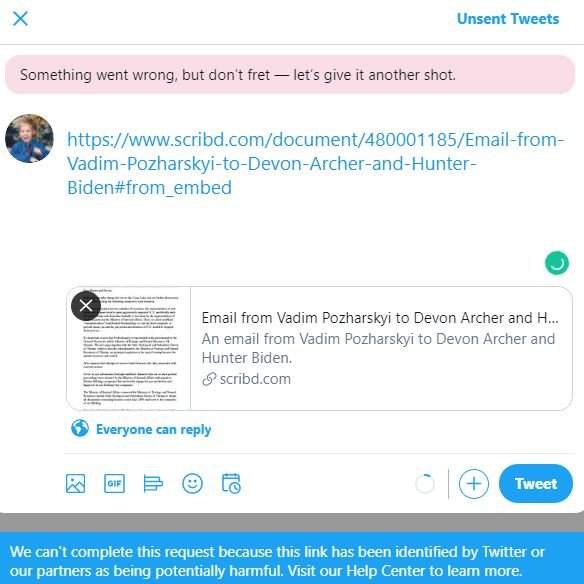 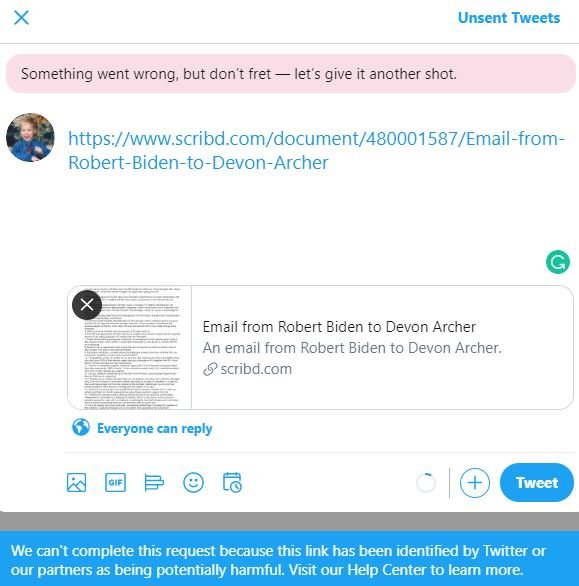 Facebook spokesman Andy Stone, a former staffer for the Democratic House Majority PAC and former California Democratic Sen. Barbara Boxer, announced earlier Wednesday it would reduce the distribution of the Post’s report despite the lack of any fact-checks against the story.

While I will intentionally not link to the New York Post, I want be clear that this story is eligible to be fact checked by Facebook’s third-party fact checking partners. In the meantime, we are reducing its distribution on our platform.