Judge Amy Coney Barrett, who President Donald Trump is reportedly considering to fill a Supreme Court vacancy, is a Catholic mother of seven who once told law students: “your fundamental purpose in life is not to be a lawyer, but to know, love and serve God.”

“I’m saving her for Ginsburg,” Trump said of Barrett in 2019, Axios reported.

Trump appointed Barrett to the 7th Circuit Court of Appeals in 2017, according to the New York Times. Her confirmation hearings gained national attention when Democratic lawmakers questioned her about her Catholic beliefs, suggesting that Barrett’s Catholicism made her unfit to serve as a judge.

“The conclusion one draws is that the dogma lives loudly within you,” Democratic California Sen. Dianne Feinstein told her. “And that’s of concern.”

Democratic Illinois Sen. Dick Durbin also questioned Barrett over an article she co-authored as a law student that included the term “orthodox Catholic,” asking Barrett: “Do you consider yourself an orthodox Catholic?”

“If you’re asking whether I’m a faithful Catholic, I am, although I would stress that my own personal church affiliation or my religious belief would not bear on the discharge of my duties as a judge,” Barrett told him.

“She is the perfect combination of brilliant jurist and a woman who brings the argument to the court that is potentially the contrary to the views of the sitting women justices,” Susan B. Anthony List President Marjorie Dannenfelser told the New York Times.

She Taught Law at the University of Notre Dame

She would go on to become the Diane and M.O Research Chair of Law and received a “distinguished professor of the year” award in 2010 and 2016. During her time at Notre Dame, Barrett joined the conservative legal group, the Federalist Society, and signed a statement of protest against former President Barack Obama’s administration for forcing employers to provide birth control against their religious beliefs.

Barrett and her family currently reside in South Bend and regularly attend Notre Dame football games and tail gates, according to the New York Times.

The potential Supreme Court nominee has drawn attention from both the left and right for her devotion to the Roman Catholic faith.

“If you can keep in mind that your fundamental purpose in life is not to be a lawyer, but to know, love and serve God,” Barrett said during a 2006 commencement address to Notre Dame law students, according to the Times, “you truly will be a different kind of lawyer.”

The Washington Post’s Ron Charles highlighted Barrett’s focus on her faith in a Sunday tweet, saying: “Amy Coney Barrett, the judge at the top of Trump’s list to replace Ruth Bader Ginsburg, has said we should always remember that a ‘legal career is but a means to an end … and that end is building the Kingdom of God.’”

Amy Coney Barrett, the judge at the top of Trump’s list to replace Ruth Bader Ginsburg, has said we should always remember that a “legal career is but a means to an end … and that end is building the Kingdom of God.” https://t.co/PZ4MRB7PLX

Filmmaker Arlen Parsa also called Barrett a “Catholic extremist with 7 children” in a since deleted tweet, hitting Barrett for her pro-life views while noting that he will vote for pro-abortion 2020 presidential candidate Joe Biden, who is also Catholic.

She Has Seven Children

Barrett was born into a family of seven children and now has seven children herself — five biological and two adopted from Haiti, according to Newsweek. She met her husband, Jesse Barrett, a federal prosecutor in Indiana, at Notre Dame Law School, the publication reported.

She does not often speak about her family, according to Newsweek, but she discussed them during her 2017 confirmation hearing which her daughters Emma, Vivian, and Tess attended while her other four children stayed home “with friends and fearless babysitters,” as Barrett put it.

She Adopted Two Children from Haiti

“Emma is 16. The first apple of our eye,” Barrett said at the 2017 hearing, according to Newsweek. “Vivian, directly next to Emma, is 13. Vivian is our miracle. Vivian joined our family—she was born in Haiti and she came home when she was 14 months old, and she weighed 11 pounds and she was so weak we were told she might never walk normally or speak. Today Vivian is a track star, and I assure you she has no trouble talking.”

Her daughter Tess was also 13 years old in 2017, and during the hearing Barrett described her as “one of the most compassionate and determined people that I know.”

“John Peter is 10, and like Vivian, he was born in Haiti,” Barrett said during the hearing. “He joined our family in 2010 when he was 3 years old after the devastating earthquake in Haiti.”

She continued: “Liam is 8. Typically curious 8-year-old. And Juliet is our spunky 6-year-old.”

Her Youngest Child Has Down Syndrome

The youngest Barrett has Downs syndrome, which Barrett learned during prenatal testing, according to the Times. Many parents choose to abort when they discover the unborn baby has Downs syndrome, but Barrett did not. She carries Benjamin piggyback down the stairs every morning, the Times reported.

“Benjamin, our youngest, is 5,” she said at the 2017 hearing, “and Benjamin has special needs, and that presents unique challenges for all of us. But I think all you need to know about Benjamin’s place in the family is summed up by the fact the other children unreservedly identify him as their favorite sibling.”

Barrett’s potential nomination to the Supreme Court to replace Ginsburg has alarmed Democratic lawmakers and abortion advocates who fear that adding Barrett to the bench may result in overturning Roe v. Wade.

“Amy Coney Barrett meets Donald Trump’s two main litmus tests: She has made clear she would invalidate the (Affordable Care Act) and take health care away from millions of people and undermine a woman’s reproductive freedom,” Nan Aron, president of the liberal Alliance for Justice, told the Times.

Barrett was asked if she believed abortion is always immoral in the 2017 White House questionnaire, the Associated Press reported.

“If I am confirmed (to the 7th Circuit), my views on this or any other question will have no bearing on the discharge of my duties as a judge,” she said.

She has also said that she believes life begins at conception, according to Notre Dame magazine, and signed a 2015 joint letter that affirmed “the value of human life from conception to natural death.”

Barrett suggested in 2016 during a talk at Jacksonville University that though a woman’s right to abortion, as understood by Roe v. Wade, may not change, the “question of whether people can get very late-term abortions, you know, how many restrictions can be put on clinics, I think that would change,” the Times reported.

“If Roe v. Wade were coming against the court for the first time, I suspect that she would say there is nothing in the Constitution about this, and if you want a constitutional right to an abortion, people are free to add one to the Constitution, but it is not in there,” President of Catholic University John Garvey, who taught Barrett in law school, told the times. “That is not the question now. We have had 45 years of abortion jurisprudence.”

Planned Parenthood’s action arm condemned Barrett before she was confirmed as a federal judge in 2017, saying in a statement that “the idea that Amy Coney Barrett would be a fair and impartial judge on issues of reproductive health is ludicrous.” Planned Parenthood did not immediately respond to a request for comment from the Daily Caller News Foundation on Barrett’s potential nomination to the Supreme Court.

Amy Coney Barrett — who was already confirmed, despite only having one case — said judges shouldn’t follow the law if it clashes with their religious beliefs. #BadForWomen #CourtsMatter

“We call on every United States senator to uphold a fundamental standard: If you oppose Roe v. Wade and would empower employers to deny women access to birth control, you should not sit on the bench,” Dana Singiser, vice president of government relations and public policy for Planned Parenthood Action Fund, said in a statement in 2017. “​Planned Parenthood urges senators to reject the nomination of Amy Coney Barrett to the Seventh Circuit.” 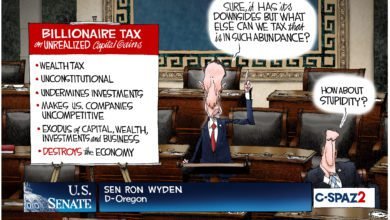 21 House Democrats Call For IRS Reporting Proposal To Be Scrapped

US Issues First Passport With X Option For Nonbinary Americans