It’s strange when you see a major city’s police department acting as a representative for the welfare of criminals, and publishing guidelines advising citizens to willingly give in to a robber’s demands for their property and money. In the past the police department concentrated on catching and jailing the crooks, but that’s exactly what the Minneapolis police department did not do on August 3rd.

This is obviously a result of leftist governors and mayors, presiding over dark blue, far left, states, advocating the defunding of police departments and allowing, and even encouraging, robbing, burning and looting on their streets in protest of, well, anything and everything.

The directive from the Minneapolis police department advises citizens to readily give up their property when confronted by robbers, and to offer no resistance to them. In fact, the police department says, citizens should “be prepared” to be robbed, and are advised to carry a substantial amount of money at all times so as not to disappoint a criminal and be beaten or killed for lowering his expected monetary take for the day. I’m sure that criminals appreciate the statement issued by the police, because it definitely make the criminals’ job safer and easier, not to mention more lucrative. 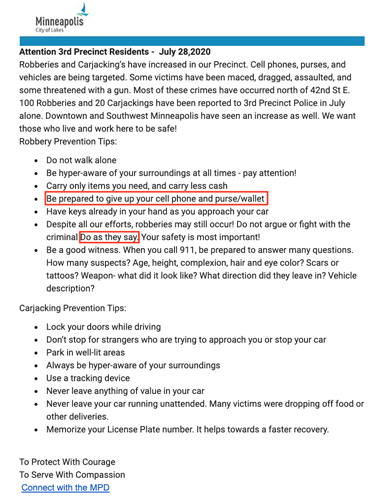 Hasn’t the example of the sixty-plus days of rioting and burning in Portland, Oregon, been a lesson that even leftist Democrats could learn? If no opposition is offered to criminals, and if their per diem income is assured by the police department, the situation will only get worse and citizens will suffer more and lose more of their hard-earned money, perhaps even lose their lives.

Seattle police have also given in to criminals, and have thrown up their hands at the prohibitions placed on them by the corrupt Democrat leaders of that city, and have told businesses that they are on their own as far as property crimes are concerned.

How is such a third-world thing happening in America? The answer is that it’s happening because Democrats are stupid, spineless, corrupt people who haven’t got the courage to oppose criminal uprisings in their areas of responsibility and are letting their own citizens suffer as a result.

Another reason leftist mayors and governors are letting crime rage, is that they hope this situation will hurt Donald Trump in his bid for re-election, and such a depraved, perverted position to take in regard to public safety, is unforgivable.

This filth and pollution from the political left will be imposed on the entire nation if Donald Trump is not re-elected to the Oval Office in November. If a Democrat becomes president, I pray for the future of our grandchildren and future generations of Americans. Their lives will be bleak at best, and painful and impoverished at worst as criminals will be allowed to roam our cities at will and commit more and even worse crimes then they are already currently doing. Let’s keep Donald Trump in the White House for four more years and assure America‘s existence at least that long.

Support Conservative Daily News with a small donation via Paypal or credit card that will go towards supporting the news and commentary you've come to appreciate.
Tags
Minneapolis Minnesota