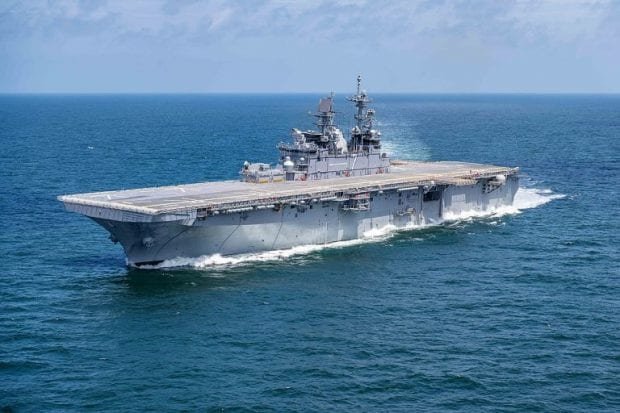 Although the Navy canceled the traditional public commissioning ceremony due to public health and safety restrictions on large public gatherings, the Navy commissioned the USS Tripoli administratively and the ship transitioned to normal operations. Meanwhile, the Navy is looking at a future opportunity to commemorate the special event with the USS Tripoli’s sponsor, crew and commissioning committee.

“USS Tripoli is proof of what the teamwork of all of our people – civilian, contractor and military – can accomplish together,” said Secretary of the Navy Kenneth J. Braithwaite. “This ship will extend the maneuverability and lethality of our fleet to confront the many challenges of a complex world, from maintaining the sea lanes to countering instability to maintaining our edge in this era of renewed great power competition.”

“Tripoli is an example of the continued investment in our Navy, to increase and maintain our edge on the battlefield,” said Sobeck. “Congratulations to Tripoli’s crew for all of your hard work, amidst these challenging times, to reach this milestone. We welcome you to the amphibious force, of combat ready ships and battle-minded crews to go to sea and support sustained combat operations.”

LHA 7 incorporates key components to provide the fleet with a more aviation-centric platform. Tripoli’s design features an enlarged hangar deck, realignment and expansion of the aviation maintenance facilities, a significant increase in available stowage for parts and support equipment, and increased aviation fuel capacity. The ship is the first LHA replacement ship to depart the shipyard ready to integrate the entire future air combat element of the Marine Corps, to include the Joint Strike Fighter.

Along with its pioneering aviation element, LHA 7 incorporates gas turbine propulsion plant, zonal electrical distribution, and fuel-efficient electric auxiliary propulsion systems first installed on USS Makin Island (LHD 8). LHA 7 is 844 feet in length, has a displacement of approximately 44,000 long tons, and will be capable of operating at speeds of over 20 knots.

Tripoli’s commanding officer, Capt. Kevin Myers, highlighted Tripoli’s accomplishments over the past several months getting through initial sea trials. The hard work and dedication of the entire team during the past few years was evident in the successful execution of at-sea testing.

“Being the third ship to bear the Tripoli namesake is a profound honor and this crew stands ready to carry on the legacy of our longstanding Navy and Marine Corps amphibious community,” said Meyers. “These sailors and Marines will pave the way for those still to come. What’s remarkable is seeing the dedication, perseverance and resilience these new plank owners have shown since day one, and more recently, through uncertain times as the Navy and nation work through a pandemic. There is no doubt in my mind that this team is ready to answer the nation’s call at any time or place.”

LHA 7 is the third Navy ship to be named Tripoli. The name honors and commemorates the force of U.S. Marines and approximately 370 soldiers from 11 other nationalities who captured the city of Derna, Libya, during the 1805 Battle of Derna. The battle resulted in a subsequent peace treaty and the successful conclusion of the combined operations of the First Barbary War, and was later memorialized in the Marines’ Hymn with the line, “to the shores of Tripoli.”

Tags
the Department of Defense