Those of you who have been following my articles have noticed I have been reporting on Dr. Fauci and his connection with Bill Gates and his vaccines along with George Soros and several mysterious corporate backers in their quest for a new world order. Fauci has been a major player in the coronavirus especially with his flip-flopping on the seriousness of wearing masks and the effectiveness of hydroxychloroquine during this pandemic.

Recently Breitbart reported on Dr. Fauci speaking to the U.S, Chamber of Commerce via a video chat.

Friday on CSPAN during a video conference with the U.S. Chamber of Commerce, Director of the National Institute of Allergy and Infectious Diseases Dr. Anthony Fauci said state and local government leaders should be “as forceful as possible” in urging the wearing of face masks to prevent the spread of coronavirus.

Fauci said, “I can say as a public health official I would urge the leaders, the local, political and other leaders in states and cities and towns to be as forceful as possible in getting your citizenry to wear masks.”

He added, “Masks are important as part of the Physical distancing. Physical distancing is the most important, but practically when you’re living your life and trying to open up the country. You are going to come into contact with people. And for that reason, we know that masks are really important. And we should be using them. Everyone. “

He’s now toeing the Democrat party line. He’s a Dem’ supporter, donated to Hillary, so he’s all-in on helping them screw over America. Fauci’s diatribes have exactly squat to do with health concerns and everything to do with the Globalists and their lapdog Democrat’s never-ending designs for control of the world. Fauci is just their message boy.

The reason the left pushes so hard for masks to be imposed on everyone is that it allows them to keep a measure of control over the reopening of our nation by keeping people in fear, keeping our economy shut down and our schools closed and keeping our people divided.

As one commenter,ricocat1, so aptly put it recently:

When the Dwarf was working on AIDS he never suggested closing a single gay bar or bathhouse. Now the Dwarf want to shut down America and force everyone to act like sheep. NO! TOSS THE DWARF and open up America.
TRUMP 2020!

If one wants to control the population you do that through fear and their health. Everything Dr. Fraud has said and done since January has been designed to increase deaths and hysteria, to collapse America, all to defeat Trump.

2005: Fauci’s NIH approved Hydroxychloroquine for use against coronavirus.

Since February he fraudulently claims it’s not safe.

Fauci was the one who said masks were useless when all of this started. Now he says they are mandatory after saying was no proof that masks prevented the flow of the virus to others. Fauci has misled the public even though he denies it. He’s all over the place on masks and his constant flip-flopping view on using masks, etc He needs to make up his mind.

Is Fauci the most prolific mass murderer in medical history? And/or the most heinous political weapon in world history?

President Trump on Tuesday questioned why Anthony Fauci, the government’s top infectious diseases expert, has a higher approval rating with the public than he does on his handling of the coronavirus pandemic.

The president cited the administration’s increased production of masks, gowns, ventilators and other equipment after hospitals and state leaders warned in the early weeks of the pandemic that they were lacking those critical supplies. Trump also highlighted the sheer volume of testing the U.S. has performed, another area where the administration was slow to ramp up.

Public polling has consistently shown Fauci, who has worked at the National Institute of Allergy and Infectious Diseases for roughly four decades, to be among the most trusted voices on the coronavirus. Trump, meanwhile, has gotten low marks for his handling of the pandemic.

“It sort of is curious,” Trump said. “A man works for us, with us, very closely, Dr. Fauci and Dr. [Deborah] Birx, also highly thought of, and yet they’re highly thought of, but nobody likes me. It can only be my personality. That’s all.”

No Don it’s not your personality though the media wants you to think it is. You are very blunt and tell it like it is which is a good thing in my book. Donald loves his country and its’ people and our military and wants what’s best for the people. It’s the destroy Trump media and democrats who are so triggered that they lost and their darling Hillary and her crooked  pay for play scam foundation didn’t get in that they are doing everything in their power to discredit him so they can get back in power and  lord over the people with their socialism. The country be damned.

The president stoked fresh speculation about his frustrations with Fauci late Monday when he retweeted a message that said Fauci “has misled the American public on many issues, but in particular, on dismissing hydroxychloroquine and calling Remdesivir the new gold standard.”

Asked about the retweet earlier Tuesday, Fauci said he has not misled the public even though his own statements has shown he has misled the public numerous times with his constant flip flopping over wearing masks and hydroxychloroquine.

“I don’t tweet. I don’t even read them, so I don’t really want to go there,” Fauci said. “I just will continue to do my job no matter what comes out because I think it’s very important.”

Recently I received the following e-mail by an anonymous writer that must be shared:

Something to think about….

A very well-orchestrated plan, or an unimaginable set of events that just fell into place … with the United States front and center. You tell me!!

Scare people with a virus, force them to wear masks and place them in quarantine.

Count the number of deaths every second of every day, in every News Headline. By the way, ninety-nine and eight-tenths of the people who get the virus, recover.  About one to two-tenths of one percent who get the virus, die.  Most of them have other medical problems.  Did you catch that ?  Less than 1/2 of a percent die.

No dating. No touching. Isolate people. Dehumanize them.

Empty the prisons because of the virus and fill the streets with criminals.

Send in Antifa to vandalize property, as if they are freedom fighters. Undermine the law, Riot, Loot and Attack all Law Enforcement, but tell the government to order a stand-down.

Then… Defund Law Enforcement and abolish Police. We are all being played by those who want to destroy America! This is how you destroy a Nation from within and in a very short order. 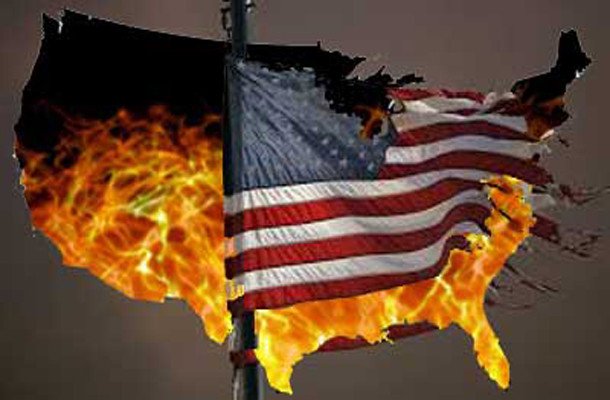 Will it work, I guess that depends on you and me.