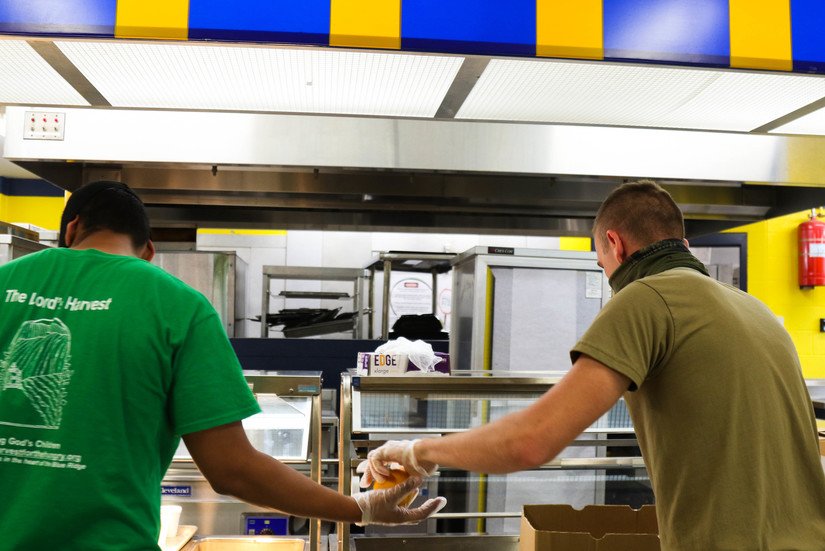 On a blisteringly hot day in the mountains of Asheville, North Carolina, Army Spc. Enrique Acevedo and Army Pfc. Bennie Kinley, both with the North Carolina Army National Guard, were handing out meals to the children of Buncombe County. Suddenly, a mother from the neighborhood graciously offered ice cream to the two hard-working guardsmen to help cool them down.

This simple scoop of kindness showcased a turning point in the developing relationship between these guardsmen and the local community. It was more than just ice cream. It was an offering and a  symbol of established trust.

“It shows the trust and strength between these programs and the communities,” Acevedo said. “They seem to be more accepting that we are just trying to help, … that there is good intention here.”

Acevedo and Kinley of the 875th Engineer Company were a part of an eight-member team called up to help the citizens of Asheville. Their service affected the community so much so that it set into motion an unstoppable wave of unity, kindness, and friendship during a time of crisis.

“Being an influence on the community just by being who you are makes you a better person,” Acevedo said.

At the beginning of their assignment, the guardians in green were met with skepticism and wariness from a community not traditionally exposed to the uniform. To help alleviate the wariness, Acevedo and Kinley took off their uniforms and began distributing food in civilian clothing to show that they were just human beings trying to help.

“It feels really good to go out there and build trust with the communities,” Kinley said.

For more than 60 days, the guardsmen have assisted the Mountain Area Nutritional Needs Alliance Foodbank in feeding people in 16 counties and supporting local school food programs.

Western North Carolina is home to diverse communities whose backgrounds originate around the world and who speak a variety of languages. To effectively communicate with the Latino community, these guardsmen broke down language barriers and built relationships of trust.

Kinley began to learn Spanish in Army Basic Combat Training to help a fellow trainee, who could not speak English, communicate with her drill sergeants. He continued to enhance his Spanish-speaking capabilities through civilian jobs and friends.

“I chose to learn to understand,” Kinley said. “You could still have a friendship through a language barrier, but the more you learn… you gain more of a trust and stronger bond with them.”

This experience further encouraged Kinley to learn and communicate with the families they were serving. Acevedo has been a guide in helping Kinley learn the culture and speak Spanish.

Acevedo has been a strong asset to the team due to his background, knowledge, and ability to easily connect with the local community. Spanish was Acevedo’s first language. He was born in New Jersey, but he was raised in Mexico. His mother eventually returned to the United States to make a better living.

When Acevedo was younger, he and his family often faced struggles from financial insecurity, and he began working at his mother’s cleaning service. Due to these hardships, Acevedo knows what it’s like to ask for help and receive assistance from programs much like the one he is now working at in Asheville.

Guardsmen understand that having diversity within the ranks makes a world of difference to the people who are trying to ask for help and communicate their needs. Army Sgt. Jonathan Greene, assigned to the 883rd Engineer Company and the noncommissioned officer in charge of the Ashville emergency relief team, has also made strides in helping the diverse community.

Back home, Greene was a volunteer at a local church that had a chapel for the deaf. The pastor mentored Greene and taught him American Sign Language.

Greene was able to transfer his capabilities and communicate with families in Asheville who were deaf and needed assistance. His unique asset enabled the food bank to effectively understand their needs and provide them the necessary food. “That always stuck with me,” Greene said. “Especially handing out food to the families that were deaf.”

The eight-member team brought more than just a helping hand. They went beyond their traditional duties to help achieve the joint mission.

Biden HHS Nominee Becerra: ‘I Have Never Sued Any Nuns’