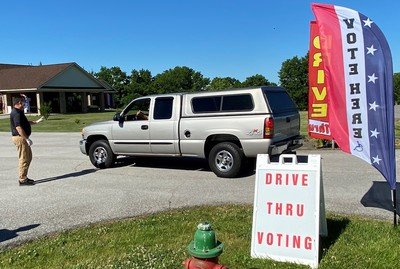 More than 200 Kentucky National Guardsmen will assist local officials at polling locations around the state for Kentucky’s June 23 primary election as part of the state’s ongoing response to the COVID-19 pandemic.

Guardsmen — who will serve out of uniform — will perform nonelection officer duties, such as setting up and cleaning poll locations and assisting with traffic, parking and crowd control in a non-law-enforcement capacity under the direction of election officers, officials said. The guard will not perform duties reserved for trained election officials, such as handling ballots or screening voters to determine who can vote.

Many of Kentucky’s poll workers are older and have to self-quarantine because of high-risk factors for COVID-19, creating a need for extra help at the polls, said Army Col. Andrew Bates, the deputy chief of staff for the Kentucky National Guard. This partnership will help protect those who are most vulnerable and allow them to remain healthy at home, he added.

”The National Guard has been asked to help in many different ways around the commonwealth, as we stand together against the COVID pandemic,” Bates said. ”This is just another way the Kentucky Guard is making a difference in their neighbor’s lives in times of crisis.”

Army Lt. Col. Andrew Caldwell, the director of military support for the Kentucky National Guard, said this is the first time, to his knowledge, that the Kentucky Guard has been asked to assist in an election. He said the guardsmen who are assisting volunteered to do so.

”We are here to support the commonwealth,” Caldwell said. ”At a time when most of the volunteers at the polling stations are in the high-risk category for the coronavirus, we are here to step into that role and protect our state and our citizens.”

In addition, Caldwell said, guardsmen will serve only at locations in the 44 counties for which election officials requested the guard’s assistance. Richard Vowels, director of the Jefferson County election center, said guardsmen were invaluable in assisting with setting up poll stations in his county ahead of the election. Vowels said because of social distancing requirements, his center has never had to set up polling locations this large.

”Our office does not have many employees in it,” Vowels said. ”We could not have made this happen without [the guard],” he continued. ”The help has really been tremendous.”

In Anderson County, where residents can vote early using drive-thru or walk-in stations, County Clerk Jason Denny said the guard’s assistance has been a great benefit.

”The soldiers have been helping us with traffic control and doing things like sanitizing voting stations to help prevent the spread of the virus,” he said. ”It’s been very beneficial. We appreciate the guard being able to do this for us.”

On June 12, Army Chief Warrant Officer 2 David Cureton, with the Kentucky National Guard, received a thumbs-up from a voter as he directed traffic through a drive-thru voting station at the Anthony Stratton Building in Lawrenceburg.

The Kentucky National Guard has found itself serving in multiple capacities during the pandemic, such as assisting with food banks and turning an exhibit hall at the state fairgrounds into a field hospital. This year has presented several missions that require skill sets that are not often required to be used outside of the training environment, said Army Maj. John Kwiek, the special project officer with the Kentucky National Guard.

”Our Kentucky National Guard soldiers have excelled at every task placed in front of them,” Kwiek said. ”Our soldiers have shown the commonwealth and their communities that we have been trained to provide assistance in many capacities, both home and abroad.”

With this most recent assignment, Kentucky joins other states who have also recently used guardsmen in elections, including Nebraska and Wisconsin. While preparing to assist at polls, Kentucky National Guard leaders said they studied best practices from the Wisconsin National Guard, which reported a successful election-support mission.