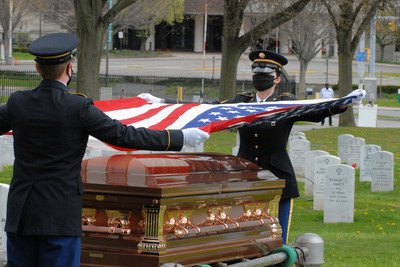 On a warm and cloudy morning, Army Sgt. Nikole Clark and Army Spc. Austin Dycha stepped out of their cars at Holy Cross Cemetery in Lackawanna, New York, to conduct a funeral ceremony in honor of former Army Air Force Cpl. Raymond Kegler, who served during World War II.

They donned jackets and service caps, brushed off lint, and pulled on their white gloves.

Then they added the newest part of their uniforms: a black cloth mask. These masks are the primary protection against the spread of COVID-19 and are now required during funeral honors.

Before the pandemic, the New York Army National Guard’s Military Funeral Honors Program was performing an average of 850 services per month, statewide. Now, the average is down to 350..

“Although veterans are passing, some cemeteries are not allowing honors to be performed at the moment,” explained Army 1st Lt. Melisa Rosario, the officer in charge of the program.

Based on National Guard Bureau guidelines, a maximum of three soldiers are currently allowed at a funeral, so New York’s program is offering only modified honors. Where they are permitted, each individual ceremony is directed by a detail leader like Clark, who has the duty of presenting the burial flag to the veteran’s family.

“The detail leader will determine how safe they feel at the service and has the option to place the flag 6 feet from the next of kin, or on the casket,” Rosario said.

New COVID-19 protection guidelines are causing a lot of uncertainty in the way the time-honored traditions of the final salute are performed. Small details such as which way a funeral procession arrives at the cemetery are normally the same each time, but with gate restrictions and casket arrival times affecting when and how the service takes place, honor guard members have to adjust quickly to each situation.

“We’re trained to manage it and think on our feet,” Clark said. “We make it work, whatever we’ve got to do.”

The personnel restrictions don’t just affect the honor guard. They also affect the number of family members allowed to attend.

“We’ve done services where it’s hundreds of people there, and now it’s a handful of people,” Clark explained. “And once in a while you get them live-streaming, too. It’s not really something you saw before.”

Clark has performed more than 700 funeral honors. The steps become near-muscle memory, she said. What took the most getting used to was not kneeling in front of the next of kin to present the burial flag, she said.

“Kneeling in front of someone and looking into their eyes, and presenting them a flag is kind of a worth-a-thousand-words kind of thing, a big gesture, a more powerful gesture,” Clark explained.

Clark and Dycha say that what they offer families during funerals while the COVID-19 pandemic continues is a sense of normalcy in a far-from-normal time.

“It’s definitely less intimate,” Clark said. “You just have to make do with it and still know that the family understands.”