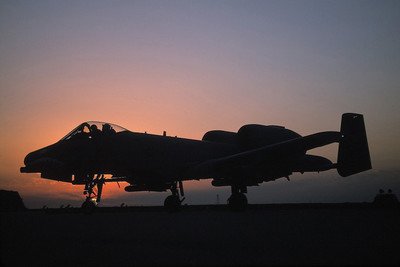 A lot of us wake up in the morning and get ready for another day in our office cubicles. For Idaho Air National Guard Capt. Mike Shufeldt, that cubicle is often a 29,000-pound gunship with space for one and lots of buttons, levers, gauges and switches to play with.

Shufeldt’s been flying the A-10 Thunderbolt II for about three years. Surprisingly, like many Air National Guard pilots, he was never active-duty. After college, he decided he wanted to be a fighter pilot. Instead of enlisting in an active-duty branch, he was hired by the Idaho Air National Guard. He then spent a few years in training to fly the A-10, one of the U.S. military’s most reliable and dominant close-air support systems. Nicknamed the Warthog, or “Hawg,” the A-10 has been in use for decades and has continuously adapted to new technology to support and protect U.S. ground forces all over the world.

So what’s it like to fly one of these things? Shufeldt talked with us about how he made his career happen and what it’s like to do the job.

You weren’t an active-duty military member before this. How did you become an Air National Guard pilot?

I’m what we call a “Guard baby.” I finished my undergraduate degree at the University of Arizona in 2012 and realized I had made a mistake in not joining ROTC to try and become a fighter pilot. Fortunately, I met a Guard F-16 pilot, who introduced me to the idea of joining the Air National Guard. So, I spent the next year getting my packet together and applying to fighter squadrons across the U.S., which required a college degree, pilot’s license, passing a few Air Force qualifying tests and having no grounding medical issues. After interviewing with the 190th Fighter Squadron, I was hired to fly A-10s in Boise. From that point on, I went to the standard U.S. Air Force pilot training knowing that if I made it through, I’d fly the A-10.

Your flight training: Where did you get it, and how long did it take?

The Air Force pilot training pipeline starts at undergraduate pilot training. It’s about a year-long course, which I did at Sheppard Air Force Base in Wichita Falls, Texas. After that, depending on what aircraft you track to, your path can vary. I went to the Introduction to Fighter Fundamentals course at Sheppard as well and then went to B-Course for A-10 training at Davis-Monthan Air Force Base in Tucson, Arizona.

What advice do you have for current pilots in training?

The best pieces of advice I can offer for UPT students or anyone learning to fly are to prioritize what’s important on a daily basis, learn to shake it off when you mess up or fail a ride, and remember that you are learning to fly, which is awesome! You should be having fun.

How does it feel to be one of the few pilots in the world who gets to fly one of the U.S. military’s most durable and reliable aircraft?

I feel humbled and honored every time I strap into an A-10. For one, the history of the A-10 community is extremely impressive. This jet has been providing close-air support and protecting U.S. and coalition forces since before I was born. Also, knowing how much training, time and money goes into developing every A-10 pilot [and fighter pilot] is humbling and makes us take what we do very seriously. I couldn’t think of a better aircraft to fly than the Hawg. The mission is unique, relevant and rewarding, and I love flying it.

I hear your call sign is “Chapo.” Can you explain?

Yes, my call sign is Chapo. As fighter pilot tradition suggests, the exact story and reason is privileged information — sorry! Like most pilot call signs, it gets kind of personal. That being said, being from Arizona probably had something to do with it.

What’s your headspace like when you’re in the air? Where does your focus lie?

We try to train like we fight. Every time we’re in the air supporting a real or training mission, our focus is on being the best close-air support players we can. Like I mentioned, protecting our friends on the ground is our primary mission. So, I imagine I would be 100% focused on doing that.

Before missions, there are preflight briefings and aircraft checks. What do those involve?

Pre-flight briefings can vary in what they entail. We’ll always discuss administrative-type plans in case of emergencies or unplanned weather, etc. Then we’ll go into mission specifics and what we expect to see and encounter on the day’s mission. Finally, we brief contingency plans for anything unexpected and different.

During the pre-flight check of the jet, we follow a checklist to make sure the jet is ready to fly and doesn’t have any issues. I take a big-picture approach to the pre-flight and mainly check the conditions of my weapons, as well as check for any visible damage to the aircraft. I trust our crew chiefs and maintainers and know that the jet is ready to fly when I walk out to it. It takes a lot of people working together to get that aircraft in the air to support a mission.

There are other mission components, too, including battle damage checks and a post-flight debriefing. What, in your opinion, is the most important part?

I think having a solid plan when you walk out the door is always very important. The brief can answer a lot of questions and get the flight on the same page regarding what is happening on the ground and how we’re going to react to different situations. That being said, I think the best A-10 pilots are the ones who can quickly think on their feet and react to what is happening on a mission. In close-air support, things are always changing and you need to be ready for anything.

What’s one of your best/craziest memories from a mission?

My most memorable sortie was the first time shooting the A-10’s gun. The GAU-8 is a seven-barrel, 30mm Gatling-style gun that the plane was literally built around. The gun fires at a rate of 70 rounds per second, and the first time you shoot it is a rite of passage in the Hawg community. I remember specifically being at the Barry M. Goldwater training range in Arizona and setting up for my first strafe pass. When you pull the trigger, the jet shakes like crazy, there is gun gas shooting by the cockpit, and you can smell the cordite from the rounds. Afterward, I just remember how my mind was blown at how accurate the GAU-8 is, especially in relation to how violent it feels inside the aircraft.

Do you still feel the same exhilaration as you did when you first started flying?

Like most things in life, you get used to flying, and I think some of the exhilaration fades. That being said, I’m still excited and happy every time I get to fly the Hawg. I imagine I will feel that way until the day I retire from the Air Force.

A-10s are a single-seat jet. Have you flown in two-seaters?

I’ve been lucky to be assigned to a single-seat fighter my whole career thus far, other than pilot training, where I flew the T6 Texan II and the T38 Talon. Those are both two-seat aircraft designed to teach undergraduate pilot training students the fundamentals required to become a military aviator. In my civilian flying career, I’ve flown a gambit of different aircraft ranging from small Cessna 172s and Piper Cherokees to Citation Jets and old warbirds.

When you’re NOT flying, do you have other military duties?

I’m the chief of the scheduling shop for the 190th Fighter Squadron, and that keeps me pretty busy on a daily basis. It entails figuring out when our pilots are available to fly, coordinating for airspace to fly in and ground parties to work with, and building the weekly flying schedule to ensure all our pilots get the proper amount and type of training.

What do you like to do in your spare time?

In the winter I snowboard and ski as much as I can. Living in Boise is great for that. During the summer, I like to mountain bike, trail run, go to the Boise River and get together with friends. I also spend a lot of time hanging out with family and my dogs.

Do you plan on staying in the ANG for a long time?

I really enjoy what I do. Having the opportunity to serve and fly in the U.S. Air Force and Idaho Air National Guard is something that I feel honored to do and want to continue. The big plus about the Guard is that you can move from full-time to a part-time capacity, having a full civilian career while also serving. I imagine down the road I will transition to a part-time military status and get a job in the civilian world. The flexibility that the Guard allows its military members is unmatched.