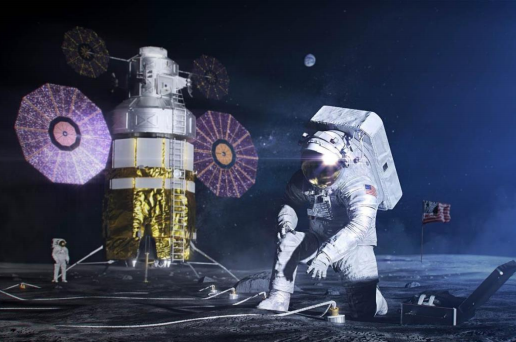 If we’re ever going to make Elon Musk’s vision of colonizing Mars a reality, we first need to figure out an essential component of the plan: how to get there. After all, it’s somewhere between 34 and 140 million miles away from Earth. The moon is barely spitting distance closer, relatively speaking—but it’s a start. More importantly, it’s the place most similar to Mars that humans are currently able to reach (in that it’s barren, desolate, and not Earth).

That’s just one reason NASA is planning to build a new lunar base camp. In a report released last week, the agency laid out its multi-phase plan for what it’s calling the Artemis program, which will be the core of its spaceflight and exploration endeavors for the next decade. Artemis’s goals cover three domains: low-Earth orbit, the moon, and Mars.

It all starts with robots. In 2021, two robotic missions will deliver scientific and commercial payloads to the moon. In one of the project’s more meta aspects, a robotic mission will also deliver a new robotic lunar rover. It’s called the Volatiles Investigating Polar Exploration Rover (VIPER, thank goodness for acronyms), and it has the word “polar” in it because this is all going to be based at the moon’s south pole, somewhere near the 12-mile-wide by 2-mile-deep Shackleton Crater. VIPER and other lunar rovers will wander around the moon’s surface looking for resources humans will need in order to spend any significant amount of time there, like oxygen and water.

Speaking of putting humans on the moon—which is slated to happen in 2024—here’s how it would work. Four astronauts at a time would fly in an Orion spacecraft to the planned Gateway space station (sort of like the moon’s version of the International Space Station, and SpaceX will be one of various contractors bringing cargo to it). After uncrewed and crewed flight tests—Artemis I and II, respectively, whose flight distances will together total almost a million miles—Artemis III will be the mission that finally lands people on the moon.

Once they’re there, NASA envisions astronauts staying on the moon for up to a week at a time to start. The south pole base camp they’ll dock at will include a lunar terrain vehicle (if you’re picturing a moon version of an ATV, you’re probably not too far off) for them to move around in, and a “habitable mobility platform,” essentially a much larger pressurized vehicle on which astronauts could stay for 45 days at a time.

Once operations on the moon are expanded and astronauts can stay there for longer (will we ever end up with something resembling the 2019 film Ad Astra, where arrivals to the moon are greeted with a strip mall complete with McDonald’s?), the Mars piece of the Artemis plan would kick in.

Just as robots will deliver robots to the moon before humans go there, the same would subsequently happen on Mars: robots first, humans later.

One idea is for a four-person crew to live on the Gateway station for a few months to simulate an outbound trip to Mars, with two of those crew members then traveling to the lunar surface while the other two stay on the Gateway. After the two moon explorers return to the station, all four crew members would hunker down for another multi-month stay there to simulate the return trip to Earth. And you thought being shut in your house for a few weeks was bad…

And here’s one final detail to know about project Artemis. In a (hard-won) nod to gender equality, the program was named after the Greek goddess of the hunt and the moon. In Greek mythology, Artemis was the twin sister of Apollo, for whom the first moon missions were named (and memorialized by Tom Hanks for those of us who weren’t alive at the time). NASA chose the name Artemis as a gesture of inclusion; the agency intends to land the first woman on the moon as part of this multi-faceted project.

You can read all the specifics of project Artemis here.