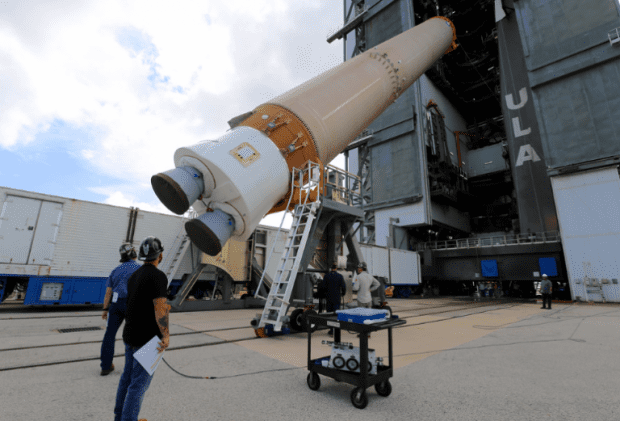 Cape Canaveral Air Force Station, Fla., (March 24, 2020) – A United Launch Alliance (ULA) Atlas V rocket is in final preparations to launch the sixth Advanced Extremely High Frequency (AEHF) communications satellite for the U.S. Space Force’s Space and Missile Systems Center. The launch is on track for March 26 at Space Launch Complex-41 from Cape Canaveral Air Force Station. Launch is planned for 2:57 p.m. EDT at the opening of a two-hour launch window. The live launch broadcast begins at 2:37 p.m. EDT on www.ulalaunch.com. The launch of AEHF-6 will mark the 138th launch for ULA and first National Security Space mission for the U.S. Space Force.

“In the current dynamic environment, national security is of utmost importance,” said Gary Wentz, ULA vice president of Government and Commercial Programs. “We are proud to launch the first National Security Space mission for the U.S. Space Force and look forward to delivering the final AEHF asset to support our nation’s national defense and the warfighter community.”Producing more than two and a half million pounds of thrust at liftoff, the Atlas V 551 configuration rocket is the most powerful in the Atlas V fleet. The 551 rocket has launched groundbreaking missions for our nation—from the critically important MUOS constellation to historic science missions including New Horizons, the first mission to Pluto and the Juno mission to Jupiter. The Atlas V 551 configuration first launched on January 19, 2006 and has launched 10 times to date.

This launch will mark the 500th flight of the RL10 engine, which has flown hundreds of times on ULA and ULA heritage vehicles, and supported ULA’s launches of military, civil and commercial satellites, and has sent spacecraft to explore every planet in our solar system.