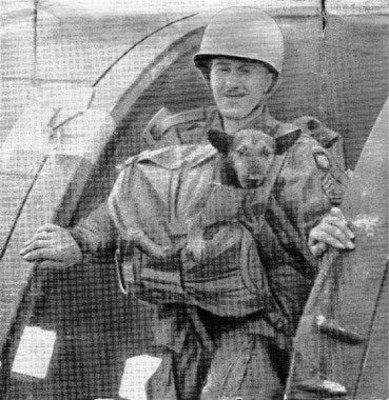 Army 1st Sgt. Leonard Funk served in some of the most pivotal campaigns in the European theater of World War II, making him one of the war’s most decorated paratroopers. After jumping into Normandy on D-Day with the 82nd Airborne Division, he earned the Distinguished Service Cross during Operation Market Garden. His Medal of Honor was earned toward the end of the war when he led the capture of a German garrison during the Battle of the Bulge.

Funk was born Aug. 27, 1916, and grew up east of Pittsburgh. He enlisted in the Army as a 21-year-old in June 1941, months before the U.S. entered World War II. He volunteered to be a paratrooper and was assigned to Company C of the 82nd’s 508th Parachute Infantry Regiment. Funk was stationed in England for much of the war, although he didn’t see action until June 6, 1944 — D-Day, the largest land, air and sea invasion in history.

On that day, the small unit he commanded landed nearly 40 miles inland. They fought for several days before breaking through enemy lines to rejoin their regiments closer to the coast. Everyone in Funk’s unit survived that mission, and he earned a Silver Star Medal.

But that’s a story for another time. Today we’re focused on his heroics during the Battle of the Bulge.

On Jan. 29, 1945, Funk found himself in waist-deep snowdrifts with other American forces who had been fighting a massive contingent of German troops since mid-December. His unit had managed to advance 15 miles in a driving snowstorm so they could attack the German-held town of Holzheim, Belgium.

When the company’s executive officer went down, Funk stepped up to take his place. He realized they didn’t have enough infantrymen to take out the German garrison, so he gathered a platoon full of clerks — soldiers with noncombat jobs — and turned them into a fighting force.

Despite facing direct artillery shelling and gunfire, Funk’s men moved in. They attacked and cleared 15 houses without suffering any injuries. With the help of another American unit, they quickly overran the town, taking about 80 German prisoners who were placed under a four-man guard. The rest of the dilapidated American forces, including Funk, scanned the town to mop up any isolated points of resistance.

A few hours later, an enemy patrol managed to trick the Americans acting as guards, freeing the German prisoners. They had begun to get into place to attack Company C from the rear when Funk returned to check on the prisoners. He walked right into the enemy patrol.

A German officer, poking a pistol into Funk’s stomach, ordered him to surrender. The first sergeant pretended to comply with the order, slowly unslinging his submachine gun from his shoulder. But instead of giving it up, he quickly fired, emptying a full magazine into the German officer and his counterparts, all the while shouting to his American comrades to seize the enemy’s weapons.

Within minutes, 21 Germans were killed, many more were wounded and the rest were captured.

Despite being outnumbered and facing certain death, Funk’s actions were directly responsible for the recapture of a force that was much larger than his own. His actions also allowed the other units of Company C to continue their attack plans unfettered.

Funk received the Medal of Honor for his actions on Sept. 5, 1945, at a ceremony at the White House. He’s one of the most decorated paratroopers of World War II, having also earned the Bronze Star and Purple Heart with two oak leaf clusters.

Funk left the Army after the war and went on to work for the Veterans Administration in the Pittsburgh area. He and his wife, Gertrude, have two daughters.

Funk retired from the VA in 1972 and lived in McKeesport, Pennsylvania, until his death on Nov. 20, 1992. The 76-year-old is buried at Arlington National Cemetery.

His legacy lives on. In 1995, a section of road where he lived was renamed the Leonard A. Funk Jr. Highway. In May 2018, he was inducted into the 82nd Airborne Division’s Hall of Fame.

Is there a ‘Truth-Telling Trend’ on the Horizon for 2020?