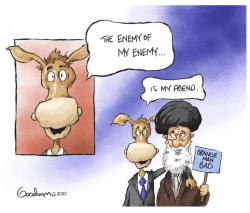 There is an old adage: “Don’t listen to what someone says, but observe closely what they do!”

Through the years, Democrats have professed to be the home for American workers, Blacks, Labor Unions, and underprivileged – especially blue collar. They further promoted themselves as the only venue for Godliness, constitutionalism, civil libertarians, government monitors, fact-finders, exposing secret government alphabet agency wrong-doings, and citizen justice warriors. Then something dramatically changed.

Democrats have gone through some sort of change of mission and now stand for none of the above while swinging their efforts full force into a “Hate Anything America” mode.

The Democrat’s new brand of politics is all about havoc, injustice, denying citizens of constitutional rights, government corruption, anti-Americanism, anti-Constitutional, putting Americans on welfare, eliminating jobs, crippling businesses, and they feel no regret about being mentally unstable and misdirected in their efforts to harm America.

“I do solemnly swear (or affirm) that I will support and defend the Constitution of the United States against all enemies, foreign and domestic; that I will bear true faith and allegiance to the same; that I take this obligation freely, without any mental reservation or purpose of evasion; and that I will well and faithfully discharge the duties of the office on which I am about to enter. So help me God.”

How does any normal being go from this oath of office, to intentionally supporting terrorists that have murdered hundreds and wounded thousands of our military personnel, illegally spying on American citizens who have committed no crimes, failing to put America first, placing illegal aliens before American citizens, denying Americans of Constitutionally protected rights, deniers of fact and truth, impeaching a duly elected President that has committed no crimes, orchestrating a Presidential Coup, bullying innocent people, aiding and abetting corrupted government agencies, dividing – not uniting Americans, and routinely lying to the American people!

How does anyone go from their oath of office to being borderline criminals and sworn anti-Americans blaming the United States for all things evil? Isn’t this similar to going to work for Wendy’s but rooting for Burger King? Obviously, it is now very clear their oath of office is meaningless and they have no intentions of supporting American first policies!

Yes, it’s impossible to justify such mental derangement based upon what they say verses what they do. Americans must now agree Democrats have gone beyond boundaries of recognized sanity – not only as Congressional leaders, but members of their Party, as well.

After all, if any government representative can’t agree America and its citizenry must come before all others, then what’s left to debate? Why should taxpayers give them a paycheck? If supporting and defending murderous terrorist over our own military is acceptable behavior, isn’t that treason?

Hating our duly elected President, American citizens, our military, constitutional rights, due process, police, ICE, our economy, and law enforcement is not acceptable or a virtuous stand – regardless of political persuasion. Such people must be exposed and monitored – not elected to Congress!

Anyone proclaiming allegiance to the Democrat Party must now be exposed for what they are… traitors, terrorists, and enemies of the State. They do not have the best interests of America or its citizenry at heart. They are nothing more than out of control lynch mobs, today.

America, we must vote these people out of office and get them off the playing field before it’s too late. Socialism instead of Godliness is not going to work no matter how enticing Democrats proclaim.

We must prepare for a major battle in 2020. America can no longer allow anti-Americans to run or be a part of our country’s leadership.