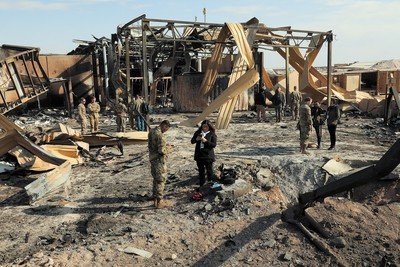 Commanders in Iraq took every necessary step to ensure the safety of U.S. forces during the Jan. 8 missile attack by Iran on Al Asad Air Base, Chief Pentagon Spokesperson Alyssa Farah said today.

Military regulations require that the Pentagon be immediately notified of injuries to U.S. military personnel when there is a threat to life, limb or vision, Farah said. Concussions aren’t usually reported to the defense secretary, she said, but because of public interest, officials sought out additional information.

Additionally, some of the injured personnel didn’t report their symptoms immediately after the attack, said Jonathan Rath Hoffman, assistant to the secretary of defense for public affairs.

“Either they had concussion symptoms that appeared shortly after the attack, and did not diminish and, therefore they’ve been sent on for further evaluation, or they have concussion symptoms … that only manifested later, and therefore have caused medical personnel on the ground to move them onward for examination,” he said.

Most of the personnel examined after the attack needed no additional medical attention, Far3ah said. “However, a number of service members continued to display concussion-like symptoms days after the attacks and reported them to their chain of command,” she said.

Support Conservative Daily News with a small donation via Paypal or credit card that will go towards supporting the news and commentary you've come to appreciate.
Claudette RouloJanuary 18, 2020
Facebook Twitter Reddit Telegram Share via Email Print