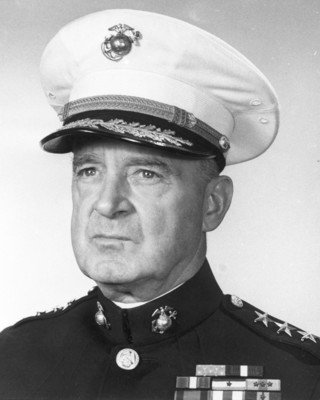 The Medal of Honor is often given for one act of valor, but service members can also earn it for many acts over time. One of the more prominent names to have done that was World War II Marine Corps Gen. Alexander Vandegrift, whose command during the Guadalcanal campaign in the South Pacific led to a critical U.S. victory.

Vandegrift was born March 13, 1887, in Charlottesville, Virginia. He went to the University of Virginia before being commissioned into the Marine Corps as a second lieutenant in 1909.

Vandegrift didn’t see combat during World War I, but he did serve overseas later in Cuba, Nicaragua, Mexico, Haiti and China. By 1942, when the U.S. had entered World War II, he had risen to the rank of major general.

That summer, U.S. military leaders had learned that the Japanese were building an airfield on Guadalcanal, an obscure island in the Solomon Islands chain. It marked Japan’s furthest advance toward the eastern half of the South Pacific, which was a great concern to the Allies. If Japan remained in control of the island, it could have imperiled vital U.S. supply lines to Australia and isolated that Allied nation.

So, Guadalcanal became the focus of the first major U.S. offensive against the Japanese. For six months, Marines, sailors and soldiers took part in Operation Watchtower. Marines accounted for the largest part of the fighting force.

Vandegrift commanded the 1st Marine Division — the only trained amphibious assault troops available in the Pacific at the time. On Aug. 7, 1942, U.S. naval forces fired on a surprised enemy, driving the Japanese away from the airfield they were building and allowing Vandegrift’s men an easy landing. U.S. Marines finished building the airfield and, on Aug. 20, the first Allied air units landed there.

Over the next few months, Marines and U.S. soldiers held their position against repeated enemy attacks, despite low supplies, malnutrition and malaria. By November, the Allied land, air and sea assault had crushed the Japanese forces.

On Dec. 9, Vandegrift turned over command of the forces to Maj. Gen. Alexander M. Patch. With that, the 1st Marine Division was relieved.

The Japanese remained on Guadalcanal for another two months, pretending to bring reinforcements when they were actually evacuating surviving troops, according to the U.S. Department of Education. But the damage was done. Japan officially surrendered the island on Feb. 8, 1943.

The U.S. victory set the stage for the ultimate defeat of the Japanese Imperial Navy.

Vandegrift’s tenacity, courage and resourcefulness were crucial in keeping his troops’ spirits up during those months of fighting. For his inspiring leadership, he was given the Medal of Honor on Feb. 5, 1943, at a ceremony at the White House.

In November 1943, Vandegrift commanded the 1st Marine Amphibious Corps in Bougainville, another battle in the Solomon Islands. When he returned in January 1944, he became the 18th Marine commandant. During that time, he rose to the rank of four-star general, making him the first four-star general to be commandant while still on active duty.

Vandegrift retired in 1948 after serving in the Marine Corps for nearly 40 years. In his retirement, he co-authored a book about his experiences during World War II.

Vandegrift died on May 8, 1973, in Bethesda, Maryland, after a long illness. He was buried in Arlington National Cemetery.

The general’s service to our nation continues to be honored. In 1982, the Navy frigate USS Vandegrift was named after him. The main street running through Camp Pendleton, California, also bears his name.