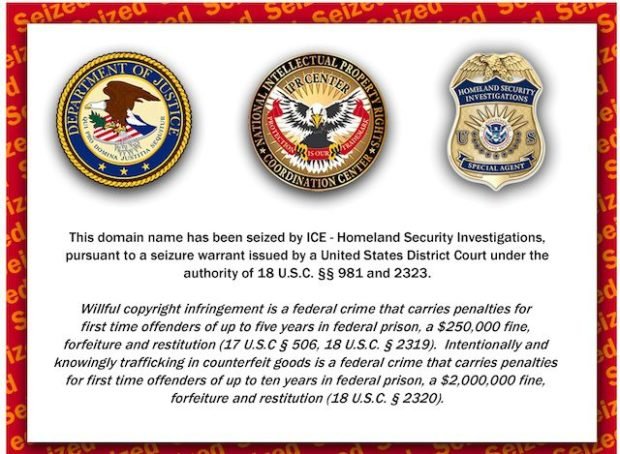 WASHINGTON – More than 1 million copyright-infringing domain names of commercial websites engaged in the illegal sale and distribution of counterfeit goods and copyrighted works are now in custody of the federal government, thanks to the combined efforts of law enforcement agencies across the world. Federal agencies, as part of the National Intellectual Property Rights Center (IPR Center), seized the websites during the year leading up to Cyber Monday, Dec. 2, 2019.

“Operation In Our Sites, which launched in 2014, is a comprehensive approach to making the internet a safer place for consumers and legitimate business owners,” said Steve Francis, director of the IPR Center. “For most, the holidays represent a season of goodwill and giving, but for criminals, it’s the season to lure in unsuspecting holiday shoppers because of the popularity of online shopping.”

The IPR Center, which stands at the forefront of the U.S. government’s response to IP theft, worked directly with key international law enforcement authorities and industry organizations representing the electronics sector, luxury brand-name designers, film and entertainment and several entities specializing in apparel and accessories through the major enforcement effort.

Each year, the market is flooded with counterfeit products being sold at stores, on street corners and online. Additionally, criminals have taken advantage of the internet to deceive, sell and ship fake products directly to American consumers. The most popular counterfeit products seized each year include watches, jewelry, handbags, wallets, wearing apparel and accessories, consumer electronics and parts, pharmaceuticals and personal care products.

The IPR Center – formally codified in the Trade Facilitation and Trade Enforcement Act of 2015 – is one of the U.S. government’s key weapons in the fight against criminal counterfeiting and piracy.

The center uses the expertise of 25 key federal and international agencies to share information, develop initiatives, coordinate enforcement actions, and conduct investigations related to IP theft and commercial fraud crimes. Through this strategic interagency partnership, the IPR Center protects the public’s health and safety, the U.S. economy and the warfighters.

Support Conservative Daily News with a small donation via Paypal or credit card that will go towards supporting the news and commentary you've come to appreciate.
Tags
National Intellectual Property Rights Center