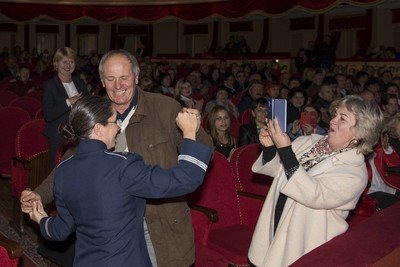 Air Force Lt. Col. Cristina Moore Urrutia decided in seventh grade that she wanted to be a music conductor. The process wasn’t easy. It included bachelor’s and master’s degrees, countless hours of practice and rigorous auditions — but she made that dream happen, and she said she couldn’t have done it without the U.S. military.

Moore Urrutia joined the Army National Guard in 1992 as an enlisted horn player before transitioning in 2001 to a full-time Air Force Band officer. She’s been stationed in many places, including Boston and Japan, but she’s now based at Ramstein Air Base, Germany, as the only woman in the Air Force to both command and conduct. She leads the U.S. Air Forces in Europe Band, part of the Air Force Band.

Moore Urrutia’s 27 years in the military have taken her to 39 countries across six continents. She’s introduced new cultures to American music and has learned her share from them. Most importantly, though, she’s cultivated U.S. relationships with other nations through cultural diplomacy — the band’s main mission.

We talked with Moore Urrutia to find out more about the band, their special mission and her unique role as the only female commander and conductor from the Air Force Band.

How many people are in the USAFE band, and how is it broken down?

There are 49 total. They break into a small jazz band, a rock band, a clarinet quartet, a Dixieland band, a brass quintet and a woodwind quintet. Sometimes we come together in large configurations for a marching band or for a concert band, but most of the time we’re broken up into our small groups. We have a very large area that we’re responsible for — both Europe and Africa — which means the groups are on the road quite a bit. We do more than 400 performances a year.

You’re one of only two female conductors in the entire Air Force Band and the only woman who also commands. How do you toggle between the two roles?

When we’re traveling in other countries and have an opportunity to do something with one of our partner nations, it’s an opportunity for me and the commander of the other band to represent on a musical side. It requires real confidence to get up there, take charge and lead a group of musicians who each bring wonderful things to the table and get them all going in the same direction at the same time. A lot of times, though, I travel with the smaller band groups, and I’m more in a leadership role, connecting with the leadership on the ground, and not so much in a musical role. It just depends. Each situation is a little bit different.

What is the Air Forces in Europe Band’s mission?

Music has the ability to cross cultures, and that cultural diplomacy … that’s what we bring to the fight. One of the key goals for the military here is that we know we cannot do anything on our own — it all gets done with our partners and allies. So, the band is building relationships in areas where we might have some challenges. We’re able to go places where a normal military presence would sound the alarm and [instead] humanize the U.S. military to those audiences — those who might be hearing a very different story about us. We’re coming in to show that hand of friendship and the reality that we stand together with the people of that country, helping them in their security concerns and promoting diplomacy.

The band just finished a “Music of Freedom” tour in Ukraine to support this mission. Tell us about it.

For the U.S. to send a military band to any country, it’s signaling a show of support, and that’s certainly what our presence was in Ukraine — that we stand with the people for their sovereignty, for democracy and for their ability to determine their own way ahead.

That tour was one of the highlights of my career. We had six National Presidential Orchestra [Ukrainian] band members that joined us the whole time, including a vocalist, so we were able to sing in Ukrainian and English. We could combine in a way that’s … unique, playing songs from their military and songs inspired by our military … to show our solidarity with them. Each location that we performed for responded so positively to seeing our groups come together. The people packed the house every night. It was an absolute thrill.

We’ve been to many locations — Ethiopia, Rwanda, Morocco, Angola — just a number of countries that we continue to support in Africa as they are building their air forces and building a defense against some of the terrorism that continues to crop up in some of these areas. We were in Kenya in August for the African Air Chiefs Symposium, where about 35 countries were represented. They’re building relationships, helping with training and showing how each country can support each other. It was really powerful to be part of that level of engagement and partnership building.

What’s been the most meaningful work trip for you?

I think each location has something so unique about it that makes it enjoyable. Being able to represent our Air Force to our own nation and to remind folks of the sacrifices that are being made is a real honor. Then, to be able to represent our nation in these various countries in Europe and Africa and the Pacific — we’re able to connect with these other cultures through music, and it’s very powerful to be part of that and see it happen. You see the connections being made and the relationships being built and it lasts. You come back and you’ll meet some of the same people, or you’ll have an opportunity to see the difference that it makes, for example, when the Air Force is able to build an airfield in a location where they were previously seeing resistance. Those kinds of things — it’s really awesome to be part of it.

Tell us about the master class programs the band hosts with school groups at home and while traveling.

We try to take advantage of this everywhere we go. We’ve done everything from classes where the audience has never seen Western instruments before to working with college-level music students. We might teach them a little bit about American jazz, which is unique to our culture, and they can teach us their specific type of music, like the African percussionists. That cultural exchange that we get with some of those schools is a lot of fun. It’s an opportunity for us to share a passion we both love. It’s also a way for us to represent the U.S. military to a young audience who hopefully will grow up and be leaders one day. If their first impression of the U.S. military was positive, I’m hopeful that would continue long into their life.

What do you love most about your job?

Everything! This job has given me the opportunity of a lifetime to travel all over the world. It’s a tremendous honor to represent our nation and our Air Force, and it’s something that I look forward to every day. I have a wonderful job and I work with amazing professionals. They’re outstanding musicians and dedicated airmen, and it is a joy to work with them on a daily basis.

The U.S. Air Forces in Europe Band is one of several carrying out the Defense Department mission. To learn more about the bands from the various military branches, click here.

Support Conservative Daily News with a small donation via Paypal or credit card that will go towards supporting the news and commentary you've come to appreciate.
Katie LangeDecember 3, 2019
Facebook Twitter Reddit Telegram Share via Email Print