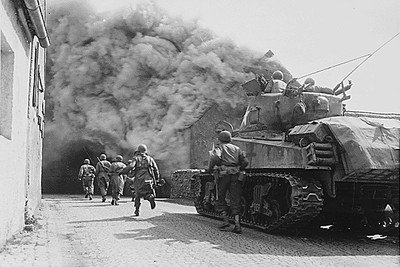 A new book featuring many previously unseen images from World War II reveals just how important to the war effort were the photographers of the Army Signal Corps, and how significant to history the collection of Signal Corps images stored at the National Archives is.

“The Army Signal Corps photographic collection is one of the largest in the National Archives still picture branch,” said David Ferriero, the archivist of the United States. “The roughly one million images covering World War I through 1981 chronicle military activities during war and peace on the front line and on the home front.”

Ferriero spoke during a presentation Nov. 14 in Washington that was co-hosted by the National Archives and the U.S. Army Center of Military History. During the event, two of the three authors of “Aftershock: The Human Toll of War,” discussed how they chose images for the new book and how the work of Army Signal Corps photographers and the availability of those images in the National Archives made it possible.

I believe that they left an incredible gift to future generations … ” said Richard Cahan, author.

Lee Reynolds, with the U.S. Army Center of Military History, explained the impact of Signal Corp photographers on U.S. history.

“These Signal Corps photo teams, carrying what was then state-of-the-art equipment, would go out into combat operations, often by themselves, and cover the events where civilian journalists either wouldn’t go, or couldn’t go,” Reynolds said.

“The results … captured on film through their lenses, were some of the most iconic pictures of World War II,” he said. “These images [were] not just used by the U.S. Army, but they could be seen in newspapers, magazines and films throughout the United States and the world.”

Richard Cahan, one of the three authors of “Aftershock,” explained that the new book focuses on imagery taken in World War II during 1945 — the last year of the war.

“We decided to concentrate on 1945 because many of the still photos and films that Signal Corps photographers took of ’43 and ’44, the action photos that we are all aware of — they’ve been shown [already] in a lot of books,” Cahan said.

Cahen also explained why he and fellow book authors Mark Jacob and Michael Williams chose to focus on imagery from the Army Signal Corps.

“The Army was on all continents across the world during World War II and they were on the ground in World War II,” he said. “So even though the Navy and the Marines and the Coast Guard produced great photographs, we thought there was continuity among Army photographs and Signal Corps photographs.”

Cahen said he and fellow authors chose historically important images as well as those photos that were artistically significant. “We wanted to show truly the human toll of war but we also look a lot for humanity.”

The book also demonstrates the efforts and challenges faced by the photographers of the Army Signal Corps, he said.

“This is a book about men … in World War II, who went to work with cameras instead of guns,” he said. “The truth of it was that they were provided a sidearm, but as every photographer said there was no way to shoot pictures and shoot guns at the same time — they all chose cameras.”

“They went through months of training to become photographers along with becoming soldiers,” Cahen continued. “I believe that they left an incredible gift to future generations, and our generation right now, by the photographs that they took of the war, because they teach us — and the … subtitle of the book is ‘The human toll of war.’ They teach us exactly that. And that is why their photographs are important.”