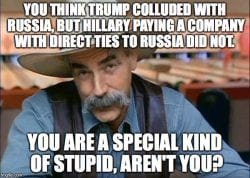 In America, as well as any other country, there are established rules, regulations, guidelines, and etiquette for just about anything imaginable.

As an example, if one wants to operate vehicles, training and exams are required to obtain appropriate licenses to operate them. No, it’s not punishment but instead, a means to protect the general welfare of citizens and establish a level playing field for all participants.

However, when it comes to Politicians… regulations and protocol be damned, right? Their actual ‘rulebook,’ the US Constitution is to most of them a problem that must be disobeyed and shredded – not guidelines to honor and follow.

Even worse, if political actions mean bringing harm to our duly elected President, Donald Trump, or his families, then it’s all okay. Then and only then do they proclaim obedience to the Constitution, they twist. Liars, liars, and more liars!

Today’s Politicians don’t see or understand how badly they are embarrassing themselves! Having a conflicted congenital liar heading up any investigation – much less something as critical as impeaching the duly elected President of the United States, is so disgraceful.

How do they ever dig their way out of this embarrassment? What’s next in their bag of tricks? Will they soon announce pedophiles will be employed to investigate campus sexual abuse? Who will ever take them seriously?

Could anyone be so stupid to believe the outcomes of such activities will wreak of justice and fairness? Let’s also not forget the Democrats are demanding their impeachment hearing thingy be wrapped in a cloak of secrecy, so the facts and truth are hidden allowing the liars to say whatever pleases them! Really?

I don’t know about you, but for me the impeachment of a duly elected President is a very big deal! In this instance, it means that a ‘hand-full’ of demonstrable liars will overturn millions of votes so they can get away with more nefarious political activities.

To understand the seriousness of the impeachment efforts, let’s go to the ultimate rule book, the US Constitution – Article 2 Section 4, it states:

“The President, Vice President and all civil Officers of the United States, shall be removed from Office on Impeachment for, and Conviction of, Treason, Bribery, or other high Crimes and Misdemeanors.”

Wow! While Congressional liars attempt to avoid the law (using a coup d’état punishable by death) and suggesting it is far too complex for us ‘commoners’ to understand, so they alone can tell us what we need to know only after leaving their secret Hitler style bunkers.

Of course, when we ask what the crime is behind the impeachment efforts, they don’t have an answer or clue. Like Nancy Pelosi stated about Obamacare, they must pass it, so we know what’s in it. Well duh!

With so many people monitoring every time President Trump sneezes, do you reckon anyone would have missed Treason, Bribery or other high Crimes and Misdemeanors? Ever heard of a lynch mob?

Would anyone believe this is law enforcement in America or Russia? In America, our legal standards are very clear and transparent, so we have protections built into our legal system to avoid legal malpractice or nefarious justice – just not in the Congressional impeachment process.

Americans have a presumption of innocence clause mandating government prove the charges against the defendant Beyond a Reasonable Doubt. This legal standard means no other logical explanation can be derived from the facts – except that the defendant committed the crime.

Shouldn’t Republicans demand the exposure of the crime committed by our President before voting to approve the waste of taxpayer money, destroying lives, maligning anyone, and embarrassing America on the world’s stage?

Article 2 Section 4 is all about our President committing a crime that is so criminal, impeachment is the only resolution. Shouldn’t someone – especially Republicans, be asking what the Hell that crime might be since no one else seems to know while millions of taxpayer money is being spent?

Are Americans supposed to believe Republicans are unaware of America’s due process procedures? How can any Republican be proud of supporting the corrupt and conflicted Democrat agenda against our duly elected President with their illegal procedure of ‘guilty until proven innocent?’

Shouldn’t Republicans demand Democrats obey and support the rights of our 6th Amendment:

“In all criminal prosecutions, the accused shall enjoy the right to a speedy and public trial, by an impartial jury of the State and district wherein the crime shall have been committed, which district shall have been previously ascertained by law, and to be informed of the nature and cause of the accusation; to be confronted with the witnesses against him; to have compulsory process for obtaining witnesses in his favor, and to have the Assistance of Counsel for his defence.”

After all, didn’t Democrats take an oath of office to uphold, obey, and protect America’s laws, too? Republican activism is mandated by law to shut down unlawful abuse of taxpayer money, fake trials, and kangaroo courts – it’s not an option!

For Republicans, how many more times will they be fooled before they are awakened by a higher call for the greater good of all citizens? Why do they routinely fail to demand justice and stand up for all Americans?

Is it time to start believing Republicans are co-conspirators? Are they using another impeachment hoax to distract voters while passing legislation allowing alphabet agencies to collect more personal data or other nefarious activities?

Regardless, it doesn’t take a genius to understand the impeachment thingy is just another Democrat hoax leading toward a Presidential coup.

Since Democrats wield so much power in DC, they must be taken seriously and shut down. Since Republicans haven’t the spine to stand for American citizens, then America calls us to expose and give the boot to all who participate in anti-Americanism.

How is it possible for any Republican to remain in the background and silent while Democrats destroy the US Constitution? Please don’t be fooled, Republicans know secret trials are being conducted by legally conflicted admitted liars and delusional people while remaining silent.

What do you think would happen if any of these spineless coward Republicans were on trial and told they had to just wait outside the bunker, sit down, shut up, and the jury will be out soon to provide their guilty verdict? Alaskans would be hearing their cries, right?

Is it unfair to place Republicans under the stupidity and coward spotlights? Even a novice legal scholar can easily confirm the Democrat Impeachment Thingy Hoax should never have been funded!

Ecclesiastes 7:25 I applied mine heart (mind) to know, and to search (examine), and to seek out wisdom (knowledge), and the reason [total picture of things], and to know the wickedness of folly (deceit), even of foolishness [and] madness (potential criminality).

Support Conservative Daily News with a small donation via Paypal or credit card that will go towards supporting the news and commentary you've come to appreciate.
Tags
Democrats impeachment Politics Politics Republicans