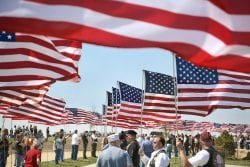 Democrat Party members find it impossible to respect or pay tribute to our brave men and women for their service in the US Military. Did you see any groups of Democrats honoring our flag, our Nation, or actively supporting Veterans and their families on November the 11th?

Of course not, because the remaining Democrats would toss them out of the Party. Along with the insane Green New Deal Democrats also have a ‘Red New Deal’ or Socialism wish list.

In a socialist society, the military and police (both one in the same) are the guys ordered to carry out the demands of the elites in charge. They aren’t to be applauded and honored because the elites see them as nothing more than the scum of society and unworthy of being a part of the elite society.

In socialism, the military serves primarily as gulags that take care of the bad people unwilling to become obedient to their leader’s commands. Socialist military members are bullies, mobs, gangs, crooked, and terrorists.

We must never forget that Socialism is all about destruction. They don’t want anything pretty, decent, or good because these things threaten and scare them.

No sooner than taps was played on Veteran’s Day did the Democrats return to desecrating America, it’s values, and our heritage. Their ideologies are so sick and demented they don’t even realize they are imploding on their own self-righteousness.

Imagine the arrogance of anyone after Veteran’s Day, marching military and government traitors into the hallowed halls of Congress to gain public support for the mutiny of a duly elected President of the United States.

Yep, for Democrats nothing is sacred, any longer. They lie, deceive, and abuse their power like at no other time in the history of America.

Truth, facts, and obedience to God is their greatest fears. Silencing opposition and rendering them impotent is their goal and overthrowing our President is their only way to achieve their goal.

Donald J. Trump is the only thing standing in their way. Democrats know Republicans will fold like a cheap lawn chair when bullied by the media.

After all the Democrat Hoaxes have so horribly failed, they are left to grasp at straws. They are like drunks searching for a new drink to make them feel better.

Instead of doing the job they are paid to perform, Democrats openly beg for corrupt money from nefarious anti-American interests not promoting the best interests of Americans.

Democrats roam the DC streets lapping up the money puddles from sleazy people while bragging about their brilliance and self-righteousness!

So, another Veteran’s Day comes and goes without even one Democrat Patriot shouting out pro-American clichés or celebrations for our Veterans.

Instead they orchestrated another coup attempt and wanted the world to see how evil, sick, and twisted they have become. Today, the world mourns a political party once great in stature, about to explode.

These are very sick and demented people who falsely believe their good looks will get them where they want to go. Instead, their ugly minds serve to shame them in every direction they go to impeach Donald J. Trump.

President Trump must routinely excuse himself from meetings to laugh as he watches Democrats slam their noses into his fists. Their newly acquired anti-American and anti-Trump spirit is getting them nowhere.

Who in their right mind wants to support liars, deceivers, and un-American activities? As long as Democrats put America and citizens last, Donald Trump will have a victory in 2020 like no other election in American history!

Support Conservative Daily News with a small donation via Paypal or credit card that will go towards supporting the news and commentary you've come to appreciate.
Tags
Democrats Veterans