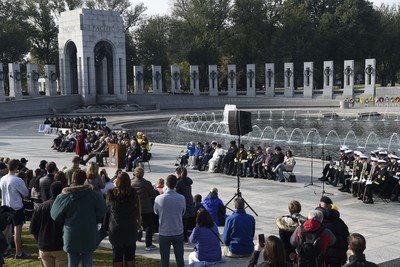 Among the approximately 20 veterans recognized was Elizabeth Lewis, who joined the Army Nurse Corps as a surgical nurse in 1943 and was assigned to the Army hospital ship Emily H. M. Weder.

That year, she said her ship sailed for North Africa, where the troops were engaged in heavy fighting. As the war in Africa and Europe wound down, her ship then sailed to New Guinea and the Philippines, where fighting continued into 1945.

She remained on the Weder until 1946, when she was honorably discharged.

Lewis said she’s glad that she and other medical personnel on the ship saved thousands of lives, but it’s the memories of those who didn’t make it that haunts her.

“It’s a shame we couldn’t bring them all back,” she said.

Army veteran Charles Robert Swain said he was drafted when he was 18. He recalled the need for fighting men in Europe in 1944 to be so great that his boot camp time was cut short.

Over the next months, he said he fought in many battles, including the Battle of the Bulge, which took place 75 years ago. He was a rifleman and attained the rank of corporal.

Although it happened so long ago, Swain said memories of the battles are still vivid. He said he was one of the lucky ones who didn’t get injured except for partial hearing loss from all of the nearby explosions.

Louis Perrone was in the Army Air Corps, stationed in Europe. As a turret gunner on a B-17 Flying Fortress bomber, he said he flew in 32 bombing missions over Germany and felt lucky to be alive, although an enemy bullet shattered his hand.

Robert Marovelli joined the Navy at 17 and got to see a lot of the Southwest Pacific from PT boats.

His first vessel, PT Boat 368 was damaged and sunk off the Dutch East Indies on Oct. 11, 1944. Marovelli said he was a good swimmer and made it to shore.

His next vessel was PT Boat 363. It was destroyed by Japanese shore batteries Nov. 25, 1944, not far from where his first boat sunk. Once again, Marrovelli found himself in the ocean and had to swim to shore.

Marovelli said he attended the dedication of the World War II Memorial in 2004, and one of the highlights of the ceremony was meeting actor Tom Hanks, he said. Hanks played a World War II soldier in “Saving Private Ryan.”

Josiah Bunting III, chairman of the Friends of the National World War II Memorial, which sponsored the day’s ceremony, said the sacrifices made by these and other men and women were inestimable. He noted that of the 16 million who served in World War II, 400,000 didn’t come home and would never know the joys of family life.

86 Fires Surge Across US Burning Over A Million Acres

US Forces In Iraq Set To End Combat Mission