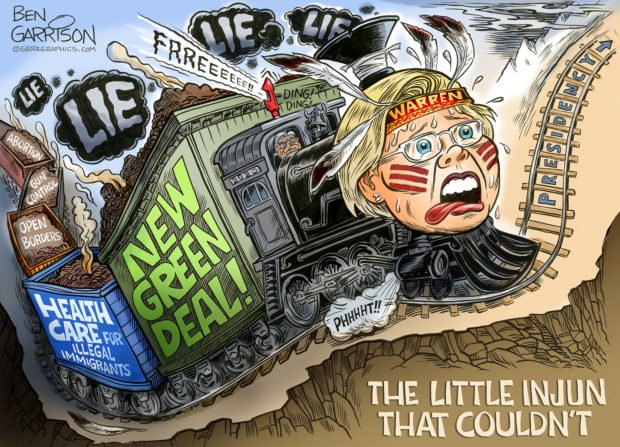 Quid Pro Joe Biden is too old, out of touch, and corrupt.

Bernie Sanders is an angry old commie with health problems.

This makes Elizabeth Warren, aka ‘Pocahontas,’ the Democrat’s front-runner.

She claims to be ‘capitalist to the bone’ and more of a centrist. Some call her a Hillary Clinton version 2.0. Like Hillary, she’s oblivious to her own political hypocrisy. She claims she’s for the little person and is not accepting donations from big banks and corporations, who she says she will break up. This is a ruse. Once nominated, she said she would again receive donations from big banks and corporations—as she has in the past.

Warren claims to be the ‘best presidential candidate money can’t buy,’ but she’s thoroughly bought out already. Her campaign treasurer is the veteran money raiser, Paul Egerman who is well connected to PACs and billionaires, including George Soros. In fact, Soros funded Warren’s Senate bid.

Warren lied about getting fired when she got pregnant.

She lied about being a Native American.

She used that status to further her career at Harvard.

Harvard is already a money pit swamp in and of itself and it spews corruption. Warren is part of that corrupt swamp. Warren is a shameless liar who could give Hillary a run for her money in that department.

Warren claims she will help bring about a middle class renaissance in America, but she’s a big ‘climate change’ pusher and New Green Deal advocate. That means the destruction of jobs and our economy. It’s a socialist pipe dream design to wreck America—and the middle class in particular. Most Americans are too busy living paycheck to paycheck to worry about the manufactured fear that is climate change. Warren will force it upon us.

Warren is a tyrannical statist and globalist who thinks more government control is the answer to all problems. Grab the guns. Control medical care and make it all free—even to illegal immigrants. Open borders and free stuff always ends in disaster. She doesn’t seem to realize this, or if she does, she welcomes such a disaster.

She wants to help everyone—except the unborn, of course. She wants babies aborted. She actually compared abortion with getting a tonsillectomy. To her, unborn humans are meaningless and annoying blobs of matter to be cut out. That’s why she calls it ‘women’s health care.’ The child is murdered to make the woman healthy.

Warren is a dangerous, lying monster who is part of the profoundly corrupt swamp. If Hillary doesn’t take over, Pocahontas will get drubbed by Trump.