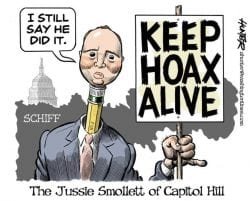 If anyone thinks the ‘Trump Deranged Syndrome’ is a bogus mental condition, how is it possible to justify those lining up to join the Democrat’s ‘Liar Club?’ Only months ago, one would have never wanted to be branded as a habitual liar, but today’s Democrats wear their membership as a badge of honor.

Nancy Pelosi and Chuck Schumer have just announced memberships are nearly sold out for their Liar’s Club. However, they were pleased to announce more memberships are available for the Democrat Party’s southern border Child Sex Trafficking Clubs, Sex Slavery Clubs, and Illegal Drug Clubs.

Yep, leave it to Democrats to come up with what is believed to be the best possible membership programs and money laundering schemes for elites. Rumors are now suggesting they will soon lower the membership standards from Billionaires to Millionaires.

After losing their long-time manager of Democrat Party club services, Jeffrey Epstein, things have not been going well with many of their exclusive programs. It appears many Republicans, as well, have terminated their memberships over the fear of investigations exposing members.

Unfortunately, Hillary and Bill Clinton have been unable to ‘keep the lid’ on the child sex and sex slavery scandals that will surely expose even more Republicans, Democrats, high-ranking government officials, and elites. Sources close to the DOJ are saying prosecutions may begin this month.

It’s also bad news for Hillary since her best friend, Harold Moody with Pulaski County Youth Services, is supposedly beginning to sing to prosecutors and says he is no longer going to be their escape goat. Will America eventually learn what he has to say or go the way of Jeffrey Epstein?

Does America know Moody was not only promoting and involved with child pornography but had live streaming chat rooms where infants were being raped? Will the DOJ expose those who purchased viewing privileges?

Meanwhile, the Democrats remain focused upon ‘impeaching our duly elected President’ but still having no evidence of any crimes. Imagine if anyone was doing to us what the Dems are doing to President Trump! It’s shameful and a waste of Taxpayer money, right?

Of course, there is now ample evidence of Democrats committing all sorts of criminal acts which explains why they are focused upon President Trump in hopes of shutting down any further details about their corruption and criminal activities.

The Democrat bucket has sprung a leak and it’s not from ‘unnamed’ sources or lies. While they continue their corrupt ways and lies, the truth is beating them at their own game.

There is so much to see and it will be a glorious and memorable day for the world to see how evil and corrupt the Democrat Party has become. Nothing left but liars, leaders, and criminals.

That’s why Donald J. Trump must be reelected and see this investigation completed.

Isaiah 44:24-25 Thus saith the LORD, thy redeemer, and he that formed thee from the womb, I am the LORD that maketh all things; that stretcheth forth the heavens alone; that spreadeth abroad the earth by myself; That frustrateth the tokens of the liars, and maketh diviners (schemers) mad; that turneth wise men backward, and maketh their knowledge foolish.