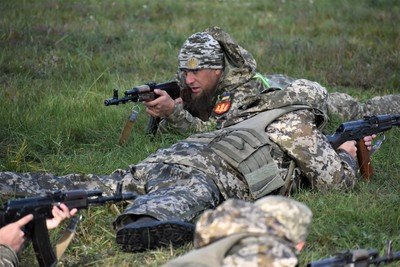 Earlier this year, the Defense Department made plans to provide some $250 million in aid to Ukraine, with the goal of transitioning that aid before the end of the fiscal year. The department was largely successful in that goal, a Pentagon spokesman said.

“As of today, the bulk of this $250 million is on contract, the rest should be out soon,” Jonathan Rath Hoffman, the assistant to the secretary of defense for public affairs, said during a news conference at the Pentagon today.

“As the secretary stated, the brief pause on obligating funds did not negatively affect our national security,” Hoffman said.

Around 85% of the funds have already been transitioned to Ukraine, and Hoffman said the remainder “will be going out in the next few days to a week.”

“This assistance helps to build Ukraine’s capacity to defend itself against aggressive Russian actions in the region,” he said.

In July, President Donald J. Trump spoke on the phone with Ukrainian President Volodymyr Zelensky and discussed, among other things, the aid the U.S. would provide to Ukraine. Hoffman said no DOD personnel were listening in.

“To my knowledge, no one from the DOD was on that call,” he said. “I specifically asked the secretary of defense that question — and he was not on that call.”

The department’s inspector general requested any documents and communications related to the security assistance aid to Ukraine for cataloging and review, Hoffman said.

That collection of documents, Hoffman said, is a fairly standard practice if there’s congressional or inspector general interest in a matter. It’s a “fairly routine, but proactive measure we’re taking.” he added.

Today, Hoffman said, the department’s stance on security remains the same as it has been in the past.

“We have been very consistent that we are going to be supportive of our allies and partners,” he said. “We are going to follow through and present and press forward on aid packages. One thing that’s been consistent that the administration has said, and the president has reiterated and the secretary has reiterated to our allies and partners, is that we are expecting our partners … to do more. We want partners and allies to not only be standing with us, but to have capabilities when they are standing with us.”

Hoffman also said Defense Secretary Dr. Mark T. Esper has continued to stress the need for a fiscal year 2020 budget. The federal government, and the department, are operating on a continuing resolution.

“In the near term of one to three months, continuing resolutions disrupt major exercises and training events, effect radians and maintenance, [delay] hiring and recruitment actions, and adversely impact contracting negotiations,” Hoffman said. “The department’s ability to implement the National Defense Strategy depends on steady predictable funding from Congress, and Secretary Esper will continue to engage with members on this topic.”