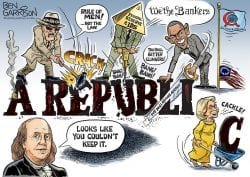 Could the following details be only another conspiracy theory or hard-hitting facts? Are we missing details that need to be exposed?

Imagine if you were living in a cave deep in the heart of the Middle East along with others who despise America. One of the more prominent ‘cave-mates’ is a guy they call Osama Bin Laden.

Because of a family inheritance, Osama has more money than God. Beyond living in a cave that needs no renovations and having all the camels and wives needed, he is single-focused upon his only lust to slay infidels (non-Muslims).

He dreams and speaks of the glorious day when he gets to Heaven with 100’s of virgins. So, he has an insatiable desire to purchase as many weapons and munitions as is possible in hopes of accelerating his trip.

After meeting with Russian, Chinese, and American gun runners, one can only guess those chosen to fulfill his ultimate quest for bigger and better weapons – especially those needed to murder Israelis. After all, money was not an issue.

Money was exchanged and airdrops began. Tons of weapons and munitions began flowing into the desert locations. Huge stashes of weaponry were buried in strategic locations throughout various middle east locations.

Next, Osama demands everyone within his clan meet to plot and plan ways to attack, harm, and destroy America and Israel. After months of debates, they reach an agreement on the ‘perfect plan.’

The key point delaying their plan is the necessity for ‘friendly’ and/or ‘insider’ US Citizens and political leaders. Humm… or could it be America’s deep state needs another escape-goat?

Because of the confidential nature of Osama’s plan, the edges of the plan were the only details revealed. Regardless, the key points are believed to be something like this:

Well, is it coincidental America is now living the results of this plan. When did it start? Could it have been prior to Lyndon Johnson? Does it matter?

What we do know is LBJ became a very vocal team player working within the parameters of this plan. Remember when he said, “I’ll Have Those N*ggers Voting Democratic for the Next 200 Years!” Does anyone recall what JFK’s wife had to say about the death of her husband?

Obviously, the founders of this plan were wise to the fact they could depend upon Democrat Party support, right? The history of the Democrat party centers around their demand for votes – not solicitation, to gain power and money.

The Democrat Party history is replete with bullying, physical harm, and murder. They have formed ‘special groups’ to manage their mob-like tactics. There is nothing more important to a Democrat than Power and Money. They will destroy anyone who interferes with their goals.

So, with only a bit of research it would be easy to believe befriending Democrats would be a primary goal. They would easily find many of them to be considerate of their plans to destroy America and giving them total power. Of course, their family ties with the Bushes doesn’t hurt, either.

Since putting these plans into operation, America has witnessed the use of airplanes, trucks, autos, and the like used to create chaos and murder. We have watched voting systems turned into weaponized political bouts.

We have also watched Black communities and families destroyed in all the Democrat-controlled environments. Attacks on law enforcement professionals have become commonplace.

High profile Americans have been murdered. Yes, there is even a body bag count on-going with only the Clintons. What has the investigation about the death of Seth Rich proven?

Let’s not overlook the recent Presidential coups within the past few years. It’s not just good enough for Democrats to attempt one, but now we see Presidential coup 2.0 with the Ukrainian government. Isn’t it too bad they can’t seem to ever find any crime?

It would only seem that if the above Presidents were not intricately involved in all the anti-American issues, then we should declare Americans have elected very stupid Presidents, right?

The more serious concern would be Presidents failing to do nothing about the deep state involved in rigging and/or weaponizing government agencies, judges, voting systems, attacking the US Constitution, and other nefarious activities.

While we are not yet able to put our arms around the deep state players, we are able to pinpoint Democrats that should face criminal legal actions for treason, corruption, accomplices, and failing to uphold their oaths of office.

If we would go downtown in any US City, post a sign stating: “Sign up for legislation supporting Child Sex for Sale,” how many signers would there be? Well, that very sign is alive and well on our borders and the Democrats won’t change or remove the sign!

How many supporters would you believe there might be for women sex slavery and illegal drugs? Again, the Democrats proudly support and display signs on our US Borders!

How many supporters would you believe there might be for people to support murdering newborn babies? Yep, Democrats support that, too!

Of course, they also support the destruction of rights afforded by the US Constitution. They want selective law enforcement – one system of laws for them, then another for all others.

Shouldn’t we also admit that Democrats are liars and damn liars, too? They have chosen to kick God out of their Party and wouldn’t know anything about ethics, love for humanity, being a public servant, or doing anything good and decent.

With Democrats, it’s always about money and power and to Hell with anything else – regardless, right? If we the people allow the Democrat deep state any win, what’s left of America’s future?

We have no choice but to banish Democrats from all offices – Local, State, and National, in 2020!

Support Conservative Daily News with a small donation via Paypal or credit card that will go towards supporting the news and commentary you've come to appreciate.
Tags
Coup d'état Democrats Politics